I've just returned from five days in Florida, visiting two dear friends, Joyce and Jean. These women were also my co-authors for the two books we wrote about life after 50. For that reason, our journey of friendship has been life-altering. I brought with me another friend, Judy, who came with me to visit several years ago, not long after her husband died. The first trip was a revelation for her, in that she could experience joy again.

The four of us did what we do best: We laughed. I'm not sure if we are actually as clever as we believe ourselves to be. But it doesn't really matter. We laughed through our days until we exhausted ourselves. We probably laughed all night in our sleep.

I brought a video with me, Advanced Style. It was made by Ari Seth Cohen, a brilliant photographer who started by photographing ultra-stylish New Yorkers as they went about their business on the streets of the city. Soon, Cohen's focus became the older women he saw, the ones aged 50-100+. These women are astonishing. They costume, for all the world to see.They are gorgeous, stylish, irreverent and fearless. They have now become minor celebrities and several are in advertising campaigns for major companies.

In anticipation of seeing the film, we went to a large thrift store and bought what we would wear to view the film. Our goal was to find the most awful clothes we could. The store provided an endless variety of choices. We spent hours on the hunt, attracting the attention of everyone around us. It's what we live for, when we are together. 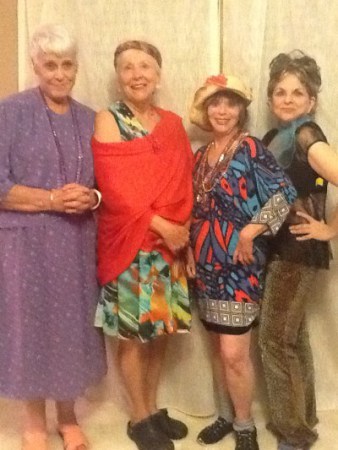 Back at Jean's, we had a fashion show, expertly directed by Joyce's niece Marlena, who is a professional stage manager in Chicago. After the show, Mar judged us on style, creativity, personality, and how well we answered the world peace question, which is an integral part of all beauty contests.

The winner (Joyce) was declared by Mar and strenuously objected to by us, on the basis of nepotism.

The show, itself, was an eye-opener. Three of us, without realizing it, chose personas that stretched the limits of who we believe ourselves to be. We became more fearless and outspoken. Jean, naturally the most outspoken and fearless of us all, became the Church Lady. I'm sure there is probably some deep meaning to all this, but we were laughing too hard to pay attention.

We watched the film. We discussed. We fell into our beds, having reluctantly changed from our costumes into into our pajamas. We spent the next days shopping, having breakfast on the beach, buying and wearing silly sunglasses to wear at Joyce's birthday dinner, walking the beach, playing board games (Sequence and Catchphrase), seeing the film Selma (fabulous -- go see it), flirting and conversing with exotic parrots, making a dreadful video of ourselves and laughing about anything and everything.

I come away from these visits having been nourished in ways I never imagined, with needs satisfied that I never knew I had. In the end, I suppose that is the essence of friendship.