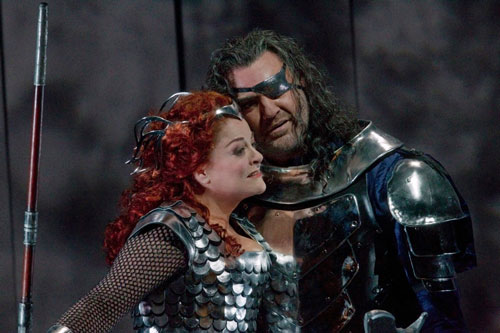 All photos and video courtesy of Metropolitan Opera

In some ways, the Metropolitan Opera's first performance Friday night of the new Robert Lepage production of Richard Wagner's "Die Walküre," valiantly conducted by a pain-constrained James Levine, was exciting for the wrong reasons. Topping the list was a gasp-provoking slide off the steeply raked set suffered by the evening's Brünnhilde, the riveting Deborah Voigt. For a moment, "Die Walküre" threatened to become "Spider-Man the Opera." There was also an unexpected (and, at first, unannounced) substitution, mid-opera, for an indisposed Eva-Maria Westbroek, making her ill-fated Met debut as Sieglinde

But the main cause for concern, throughout the evening, was the painfully obvious pain of the conductor. Let me first acknowledge that the orchestra played magnificently, as it has never failed to do under Levine's baton in all the many years that I've been attending. But at numerous times on Friday, it appeared that this lustrous performance may have owed more to careful preparation in rehearsals to what was emanating from the podium that night. (More on this later.)

Most of the singers ably met the challenges of Wagnerian strength and stamina. Vocally, soprano Voigt didn't quite live up to the great Birgit Nilsson, whose lung power had knocked me out of my chair when I heard her many years ago at the Met in the same role. But our reigning contemporary Brünnhilde came close enough to the historic standard. Dramatically, there was no comparison: Whereas Birgit was a stand-and-deliver singer, executing every role with dignified, steely grandeur, you could never take your eyes off Deborah, even when she was silently listening, because of the emotional intensity of her portrayal.

I found Voigt's interpretation of Brünnhilde, as a playful, willful and ultimately disobedient and disowned daughter, to be so moving and convincing that tears streamed down my face when Wotan regretfully took his leave of her in the last act, saying that she would never see him again.

Before conquering the vocal demands, Voigt was almost vanquished by the set at the moment of her first entrance. But she somehow managed to stay completely in character and with the music, after completely losing her footing while attempting to ascend the set's monstrous, segmented contraption that kept morphing into different shapes and colors throughout the evening.

Instead of greeting Daddy Wotan with a big hug, the impetuous Brünnhilde slid haplessly down the "mountain," landing stage front, flat on her derrière (good bone-density test!). She energetically sprung to her feet, wearing Brünnhilde's plucky grin, and didn't miss a beat as she unleashed the opera's signature "Hojotoho!" from the spot where she landed (waiting for stranded bass-baritone Bryn Terfel to join her on terra firma).

As it happened, the Met had already posted on YouTube a video of this very scene (recorded during rehearsals), so I now know what I was supposed to have seen -- Voigt at the top of the mountain, Terfel (in fine voice throughout the evening) admiring her from below. Look closely in the rather dark lower right corner, and you'll see the leader of the Valkyries ascending to embrace the Norse god. (On Friday night, she never got that far.)

For the rest of Act II, my attention to the opera was distracted by my concern for the physical welfare of the singers (particularly Voigt). Later on, Brünnhilde screwed up her courage and approached the treacherous contraption again, treading very carefully. Mezzo-soprano Stephanie Blythe, hefty of girth and radiant of voice, was having none of it: She was trundled on and off the set in the relatively small but pivotal role of Fricka, Wotan's wife, securely ensconced in a rather ungainly mechanized throne, with armrests fashioned from enormous rams' heads. 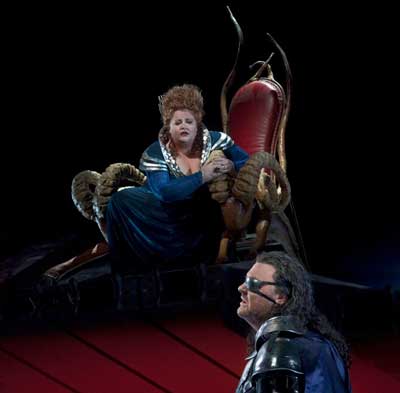 Stephanie Blythe and Bryn Terfel in the Met's "Die Walküre"

Aside from its perils, I had mixed feelings about the set: Sometimes it seemed ingeniously (and wittily) versatile, as in the famous "Ride of the Valkyries": 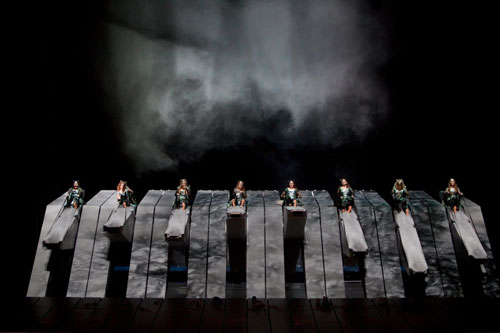 One by one, the woman warriors (intentionally this time) slid down those galloping planks at the end of their "rides."

Other times, Lepage's 90,000-pound gorilla (designed by Carl Fillion, also responsible, with Lepage, for the "Damnation of Faust's" damnable set) seemed ponderous and obtrusive, upstaging the music. It consists of 24 planks, constructed between two towers, running on a hydraulic system. It was also used in Lepage's new production of "Das Rheingold" and will be in operation throughout his re-imaginings of final two operas in the "Ring" cycle.

The only other major glitch in Friday's performance was the mid-opera substitution for the role of Sieglinde. The first act's vocal performances were disappointingly under-powered: Neither the indisposed Westbroek, nor the evening's hunky young Siegmund, Jonas Kaufmann (perhaps reined in by his partner's difficulty), soared in the sublimely rapturous moments of their love music. Siegmund's emphatic solo cries of "Nothung!" (the name of his enchanted sword), normally a high point of the tenor's role, were oddly subdued.

Before the second act, Peter Gelb, the Met's general manager, took the stage to announce that Westbroek was ill but would nevertheless continue singing. I was pleasantly surprised, therefore, that the soprano's voice (and also Kaufmann's) had unaccountably risen to Wagnerian proportions in the second act. Then, before the third act, another onstage announcer informed us that an understudy, Margaret Jane Wray (who has previously sung the role at the Met), had, in fact, taken over as Sieglinde in the second act.

Each time an announcer took the stage, I braced myself for what I thought might be a substitution of conductor. I assume that most reviewers, sitting in prime orchestra seats, didn't have the clear view of James Levine in the pit that I did, perched in my usual non-press Dress Circle Box seats.

Because of continuing back problems and other health issues, Levine had recently given up his music directorship of the Boston Symphony Orchestra and had withdrawn from a number of Met performances. From my vantage point in the theater, Levine, throughout the five-hour evening, looked to be in considerable discomfort, constantly adjusting his seated position and sometimes limiting his exertions. He began and ended the performance energetically enough, but his movements were seriously constrained for much of the evening: He wasn't cueing and exhorting the players with his usual verve.

Most alarmingly, Levine's left arm appeared to be only semi-functional. He would repeatedly use it and lose it: After a broad raised-arm gesture, he would recover by resting his left hand in his lap. For much of the night, he awkwardly extended the left arm behind him, to lean on (or, more likely, push against) the railing separating him from the audience. As an intermittent back-pain sufferer, I have a pretty good idea of what was happening: Jimmy was trying to take the strain off his bad back by bracing himself against the rail.

You can't conduct in discomfort for such a long stretch and not suffer any consequences. Levine's energy is causing him injury. For the curtain calls, the conductor did manage to to arrive at the end of the stage with the aid of a cane on one side and a helper on the other. To haltingly reach center stage, he needed to be propped up on both sides, with the sturdy Voigt and Terfel doing the honors.

Levine has repeatedly asserted that his "body's still getting stronger," as he told Daniel Wakin for a New York Times profile on Sunday of Fabio Luisi, the Met's principal guest conductor. Wakin calls Luisi "clearly the heir apparent" to Levine. On the other hand, veteran music critic Norman Lebrecht writes in the Wall Street Journal that "Luisi, who is taking over Levine's present cancellations, looks like a stop-gap, not an heir."

I don't like talk of Levine's retiring; the results he achieves are still too brilliant for us to lose him. But I don't think he can continue indefinitely without a fuller recovery.

Speaking of which, after the new production's premiere, Levine still had six more performances of "Die Walküre" to get through. I hope he makes it. After that, rather than subjecting himself to the wear and tear of the company's planned summer trip to Japan, I hope the Met's much beloved maestro considers giving his body a fighting chance to heal.