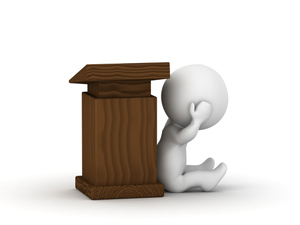 There is an affliction that threatens the livelihoods, as well as the very lives, of a great many people. I exaggerate not in the slightest when I assert, as a scientist and as a writer, that the fear of public speaking is the enemy of progress, the foe of education and the opponent of success in general.

Picture an economist with a breakthrough theory about reducing poverty, an academic who is too wary and timid to present his proposal to a major conference sponsored by the World Bank.

Imagine, too, a doctor with a novel concept about molecular biology and eliminating the risk of hospital-acquired infections, who is too nervous about revealing his findings before a packed auditorium.

Consider also the entrepreneur or established executive with critical insight about green energy or customer loyalty, who is too anxious to stand before a lectern and discuss ways to apply his recommendations.

In each of these instances, individuals lack the benefit of listening to—and the public at large loses a chance to learn from—the work of those respective pioneers referenced above.

So great is the fear of public speaking, and so grave are the stakes concerning the triumph of this aversion to taking the stage, that this problem (in addition to the diagnosis and treatment of related anxiety disorders) costs $42 billion a year.

That figure is one of several statistics from a variety of top-tier sources, including but not limited to the National Institute of Mental Health, Harvard Business School, Gallup, the Anxiety and Depression Association of America, and the Journal of Experimental Psychology.

Awareness of this problem is critical to overcoming this crippling mindset. But, inasmuch as this challenge is a matter of substance, solving (or significantly alleviating) this phobia is a question of style.

All of which brings me to Dave Ratner, an author, independent retailer, and sought-after speaker on a multitude of topics.

By reading about Dave's story, which is the culmination of having run a Google Search for Business Speakers, a seemingly straightforward process that yields an incomprehensible 305 million results, I now can attest to several things.

First, there are many self-described "Business Speakers" who are not, in my estimation, good communicators: They fidget or fumble, or they speak too quickly or too slowly, failing to capture the attention of the viewer and elicit excitement from the listener.

Secondly, many of these same speakers cause the viewer (at least this viewer) to wince, in embarrassment and pity, as these men and women attempt to summon some rhetorician's dream candidate; a combination of Julius Caesar, Abraham Lincoln, Franklin Roosevelt, Winston Churchill, John F. Kennedy, Ronald Reagan and Dr. Martin Luther King, Jr.

And thirdly, it is this failed effort to be an orator—it is the mistaken belief that all public speakers must deliver public speeches—that (partially) explains and worsens this phobia. For there is a profound difference between speaking publicly and speaking to the public.

The former is what a business speaker should do, which is what Dave Ratner does so well, while the latter is the responsibility of presidents and prime ministers, and of vainglorious generals and itinerant preachers.

Do, in other words, as Dave says . . . without him ever having to explain what he says, or why he says what he does.

This point is not some otherwise unimportant semantic distinction because, when you listen to how a speaker performs and when you then pay attention to how storyteller behaves, the two are worlds apart.

The lesson this writer derives from this fortuitous happenstance, a thunderbolt of online good luck (with ample scrutiny by yours truly, too), is the following: You can overcome the fear of public speaking by being yourself, by sharing anecdotes (both funny and inspiring) with an audience, by talking about what you know—by sharing what you love—with those who have a genuine interest in listening to, and asking questions (at a designated time) about, what you have to say.

I can, therefore, vouch for what I have seen because of what I have heard; that a master of conversation, a professional of Dave's caliber and modesty, earns your trust and deserves your applause because he is real.

His sincerity is his greatest asset, and his avuncular style is his strongest rhetorical device.

By conversing with people, and by the sheer act of repetition, you can become an effective public speaker.

You need not speak for the ages for listeners to know you are a sage about business, law, medicine, technology or any other discipline.

By showing up, without showing off, the conversation that ensues will be a personal victory and a professional accomplishment.