FringeFest NYC is our response to the Edinburgh Fringe Fest. This year it features almost 200 plays, musicals and dance pieces scattered throughout NYC over 16 days. Exhausting, fun and invariably a crap shoot where the one play you skip over turns out to be the hit of the fest. Here are four shows I caught so far.

One-person shows about famous historical figures seem so easy. You choose an important icon, preferably someone who said or wrote witty, insightful or just plain interesting things. Then you string together some of their best comments in a show that illuminates their life and times. If the person is an artist, all the better -- you get to include some of their artwork or quotes from novels or sing their songs. So why do they so often seem stiff and dull? Not so here. Writer and star Randy Noojin delivers one of the delights of the fest with his straight-forward, no-nonsense portrayal of singer, songwriter and activist Woody Guthrie in Hard Travelin' With Woody. Directed neatly by Richard Mover, the show is framed by Woody performing at a union fundraiser in 1940. Noojin avoids imitation but captures the spirit of Woody as he describes the mouthful of a name Woody had growing up (Woodrow Wilson Guthrie), his social awakening as a boom town goes bust when the oil dries up, his witnessing of the mistreatment of "Okies" in California and his aw-shucks approach to arguing for "sticking together" via unions, even as the people trying to unionize are beaten and killed. The story is punctuated with Guthrie's many terrific numbers, which Noojin delivers with aplomb, getting even an uptight New York crowd (not least of all me) singing along from the start. The show reaches a dramatic peak when Guthrie is auditioning for the Rainbow Room in New York City and feels tempted by the lure of fame and fortune. The rest of the show is descriptive and passionate, but this is the moment of real theater. More scenes of genuine dramatic impact like that would have made this piece truly great. (And while the focus is on social justice, a delightful song or two Guthrie wrote for kids would have provided a useful break in the mood.) But this is solid, entertaining work that should travel far and wide in these hard times, just like Guthrie himself.

Here's a play that should have hewed more closely to its title and description. Civilian is described as a documentary drama about veterans of the wars in Iraq and Afghanistan "transitioning from soldier to college student to civilian." Would that it were so. Perhaps 90 percent of the show covers far more familiar territory -- why soldiers enlisted, donning that uniform for the first time, firing their weapon, coming under fire, getting wounded and killing the enemy. Those stories -- based on oral histories recorded at the University of Kentucky -- are no less gripping for being familiar, though here they are rarely shaped by playwright and director Herman Daniel Farrell III. Instead, the 10 percent of the show that does indeed focus on their life at home and on campus is far more fresh and compelling. Soldiers who don't enter a classroom without planning an exit strategy, soldiers who have a panic attack when students "gang up" on a teacher, soldiers who get furious when a professor blithely dismisses U.S. troops as murderers, soldiers disdainful of students who describe an upcoming exam as life or death -- all of this is fairly uncharted territory and feels fresh. It's a pity so little of the show focuses on it. And the meta trappings of the show, such as having the actors rehearse their scenes and getting notes or having a student veteran interrupt their rehearsal to complain about the oral histories being turned into a play, serve no useful purpose. And why is one of the most compelling tales of civilian life reduced to a text message read aloud by several cast members? That cast is fine in a stolid, unemotional manner surely meant to reflect the demeanor of the veterans interviewed. Far weaker are the interviewers. It's hard to make banal questions seem interesting and then listen with a look of concern and empathy on your face, but whatever would have worked isn't accomplished by Katie Ochoa, who makes every question sound false and trite. But Andrew Zimmerman rings equally false as an interviewer, though when he returns to the stage as a soldier he delivers one of the show's lengthiest and most effective monologues. Too often, the stories aren't allowed to unfold this way, which is why his tale is so engaging. Better shaping of the material and a genuine focus on veterans as students might have made Civilian far more distinctive than it is.

A new college student seduces a vulnerable professor of literary theory in this gay noir. Or does he? Or is he? No one is quite what they seem in this melodrama by playwright Alex Defazio. Paul (Jody P. Person) is the professor who has just been dumped by his long-time lover. Manny (a comely Patrick Martin) is the 19-year-old student who has the body of a 16-year-old and the mind of Anne Baxter in All About Eve. This kid is trouble and Paul knows it, even as he falls for the lad's naughty charms. Manny is soon peaking into the professor's laptop, having online sex with strangers, getting drunk on Paul's alcohol and basically moving in, even as colleagues warn Paul about the danger he's in. 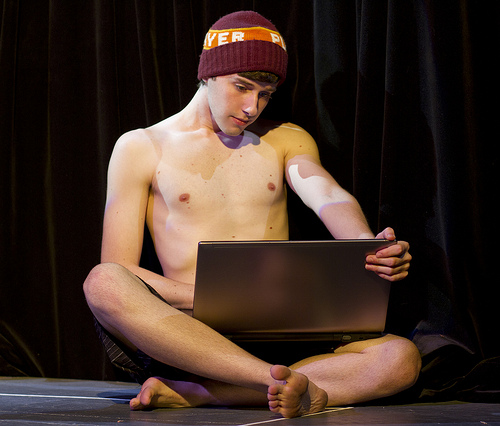 While noir doesn't necessarily have to be realistic, you better be so caught up in the passion and danger that you don't care. Instead, the world of the play just seems oddly divorced from the reality of campus life and what would happen if a professor did openly shack up with a student. Deena Jiles is the colleague and friend who bizarrely mocks her mentor's scholarship repeatedly (thank God that's addressed later on) and Michelle Wood comes off best as Sarah, the other woman, surprisingly enough. Perhaps Wood benefits from being a minor character with a clear focus and reason for behaving the way she does. Everyone else just seems to behave unconvincingly. It doesn't help that co-directors Jennifer Joyce and Person have the two female characters often on stage doing this or that for no apparent reason. They're not witnesses or reminders of the world at large or anything. They're just... there. Defazio's use of literary theory often sounds strained ("Love is just a social construct!" whines Manny several times, or words to that effect) but not as strained as the eye-popping plot twists and character revelations, each one more unbelievable and unearned than the last, right down to the gothic finale. Patrick has some fun with the obviously coy and self-absorbed Manny and the man next to me who whipped out his opera glasses certainly enjoyed Patrick's nude scene. But little pleasure can be derived from 2 Burn as a whole, not even the guilty kind.

I'm a huge Beatles fanatic so tell me that your play is set in a hotel room in 1974 with John Lennon separated from Yoko Ono and having imaginary conversations with Stu Sutcliffe, his mother and manager Brian Epstein (all of them dead in real life, of course) and I'm there. This show has the added benefit of being written by fellow Liverpudlian Scott Murphy and being staged there twice by the Liverpool Actors Studio. Unfortunately, it's strictly for Beatles fanatics like myself. Philip Quinn doesn't try and mimic Lennon but rather embody his essence in this character. But what might have been an interesting look at what kicked Lennon in the arse at this low point in his life devolves into a rehashing of the past. Its strongest passage comes first, with handsome devil Keir Howard playing the magnetic Stu, a (poor) bassist who quite the Beatles to stay in Germany and be a painter and bohemian, only to die at an early age. his give and take with Lennon feels the liveliest. Claire O'Neill has less luck as Lennon's mother Julia, who abandoned him. And Sam Inkson is unfortunately stiffest as all as closeted manager Brian Epstein, just as uptight in death as perhaps he was in life. None of the actors are helped by dialogue that spells out their feelings in blunt, obvious language. Quinn holds the stage decently, even as he's forced to make "predictions" about the future we all know will come true or paraphrase lines from future Lennon songs in his dialogue to give fans like me a thrill at "lyric-spotting." It's sincere but unaffecting, I'm afraid. This can be done, as movies like Backbeat and The Hours and Times proved. It's just not very easy. Here's Lennon with one of his biggest hits at the time.

Note: Michael Giltz was provided with free tickets to these show with the understanding that he would be writing a review.