The National September 11 Memorial & Museum foundation, with its new museum recently opened in Manhattan, often speaks of its "stakeholders": family members of victims, survivors, first responders, recovery workers, local residents, historic preservationists, and government officials. However, there is an additional possible "stakeholder" that could be conceived in two different ways, either as an almost 90-year-old sculptor from Landshut, Germany, or as a single piece of art, the respect for whose symbolic expression has its own weight.

Because the development of the World Trade Center, advanced by financial titan David Rockefeller, obliterated many acres of the low-rise "Radio Row" electronics district of the Lower West Side of Manhattan, architect Minoru Yamasaki had a great deal of space to work with. He fashioned the site's plaza as what he called "a mecca, a great relief from the narrow streets and sidewalks of the surrounding Wall Street area." In the middle, banded by concentric radial circles, he placed a large fountain and a 25-feet-high bronze sculpture by Fritz Koenig, an accomplished German artist. (Interestingly, architect Laurie Kerr has described the World Trade Center towers as essentially "minarets" for this design, with the sculpture acting as the Kaaba and with the decorative, yet functional "tridents" of the towers derived from the "pointed arches of Islam.") 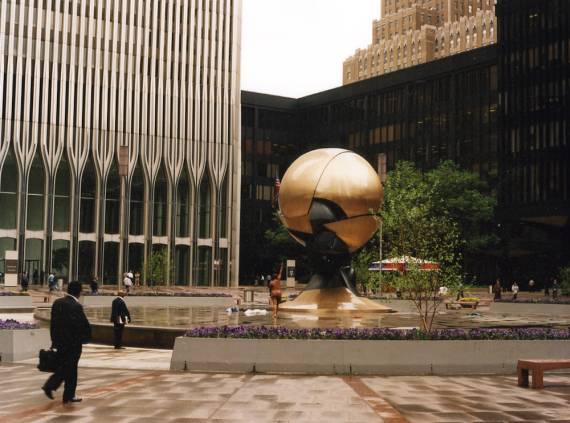 The sculpture itself, which had been popularly known as "The Sphere," quite remarkably survived the attacks, and its future has been debated since. In 2002, when the prospect of a proper memorial at "Ground Zero" was still a long way away, the sculpture was moved to Battery Park where it became a makeshift memorial with an eternal flame. Since then, however, its fate has been uncertain, although the artwork's original commissioner, the Port Authority of New York and New Jersey, would prefer that it be returned to the Memorial Plaza. The Battery Conservancy also wants it to leave, but the September 11 Memorial foundation, led by former Mayor Michael Bloomberg, has refused to place it in the section of the site that it controls.

One sincere and earnest man, Michael Burke, stepped into the middle of this impasse and established "Save the Sphere," an impressive grassroots campaign arguing for the sculpture's protection and return. The "chorus" that he led even encouraged Hans Rampf, the mayor of Fritz Koenig's hometown of Landshut in Bavaria, to call for the sculpture to sit in "its rightful place." Burke's commitment to the Sphere as a piece of art, and as a symbol of community and of historical memory, is admirable, and below is an interview about his motivation and vision.

1. Your brother, Captain William F. Burke, Jr. of FDNY Engine Company 21, died on September 11, and for years now you have led a grassroots campaign to clean and care for Fritz Koenig's sculpture and to secure its return from Battery Park to the World Trade Center site. What inspired and motivated your effort? And how have other 9/11 family members offered support?

Something definite happened on September 11, 2001, and the event demands our attention. At this location, "Ground Zero," we do not have the option of not confronting it. No one has the right to edit the history or to remake the site to impose a new meaning of their choosing (for example, as "a special place of healing" as the memorial jury said).

The very first display in the new museum's exhibition is dedicated to the Sphere, with photos of it before and after 9/11. They show it gleaming in the center of the plaza between the two towers, and, in a photo dated September 27, 2001, they show it standing alone and damaged in the ruins. The Sphere is an authentic artifact, and the museum recognizes its centrality and importance. Why not return it and allow it to speak for itself? 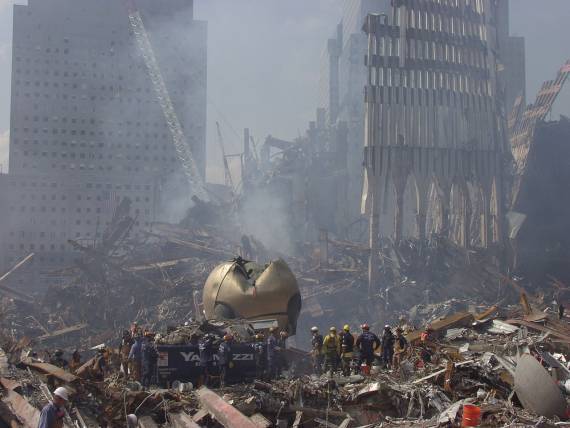 And, independent of its survival, I find it interesting that it was crafted consciously as a symbol of world peace. In its original fragmented, disjointed shape it offered a working reality of "peace," in place of the pure ideal. Now, bashed and broken but still standing, its artistic message is validated.

It is not inevitable that such artifacts and their embedded truths survive. Someone had to make the effort to save the Gettysburg battlefield, the buildings of Auschwitz, the USS Arizona, and the dome at Hiroshima. Imagine our world today if these artifacts were lost. Therefore, I took the initiate to argue for the return of this iconic artifact that should anchor the memorial site.

Scores of 9/11 family members have signed our petitions supporting the return of the Sphere, and many others have written letters to newspapers, spoken on television, and contacted government officials on behalf of the effort. In the various meetings with foundation and other officials during the years before the design was chosen and then built, many family members repeatedly advocated its return. Much of the core support, however, comes from ordinary citizens, including many downtown residents who have specific memories of the Sphere and of 9/11 itself.

2. The Port Authority of New York and New Jersey, which commissioned the original artwork and lost many people in the attacks itself, has affirmed your push, but the 9/11 Memorial foundation has said that including the sculpture would violate the "artistic integrity" of the memorial park. The new underground museum is filled with assorted symbolism, yet the above-ground memorial is notably devoid. In response to your efforts, has the foundation explained their definition of the memorial's "artistic integrity"? What is your theory as to why they rejected the Sphere?

In the public forums for the memorial selection process, participants overwhelmingly called for the return of the Sphere. A common refrain was incredulity. "It's just sitting down at Battery Park when it belongs at the memorial!"

During one of the 9/11 anniversary ceremonies, I told Michael Arad, the memorial architect, that we, the 9/11 families, largely wanted the Sphere returned to the site. He winced and told me, "That would be didactic." In other words, its placement on the plaza would tell people what to think about September 11.

Returning the Sphere, the last remaining intact standing structure of the World Trade Center, would not be "didactic" or "tell us what to think." This notion defies common sense. The memorial selection jury, in seeking to impose what I consider a narcissistic and esoteric experience upon visitors, clearly had Maya Lin's famous Vietnam War Memorial on the brain. Indeed, she was a member of the selection jury. However, this memorial in Washington, D.C. about a war fought on the other side of the world should not have been a viable model for what was chosen for the World Trade Center site. No battles of the Vietnam War were fought on the National Mall; the memorial did not replace any authentic artifacts of the war.

I sometimes ask: Would we replace a downed American jet fighter somewhere in Vietnam with some abstract artwork and claim it offers a better commemoration of the war?

The memorial is on the site of the event. We have to ask: What is our primary obligation here? To commemorate "absence," as in Arad's proposal? To offer prompting for abstract grieving? Or to faithfully preserve and convey the site's authentic history? I believe the jury and government officials, for various reasons including the corporate aesthetics of keeping things clean and antiseptic, wanted to simplify and sanitize the site. The powers that be, and this does not necessarily include the museum curators, wanted the Sphere off the site because they cannot control its message. They want to dictate an experience.

By restoring something of the site's authenticity, for me even its sacredness, the Sphere does violate the "artistic integrity" of the memorial. That tells us something about the memorial.

3. Although the World Trade Center towers were massive structures, the Sphere and its fountain offered a human-scale place where people could sit on surrounding benches and have lunch or socialize in the open air. What stories of people's memories of sitting near the Sphere do you find most valuable or remarkable?

For our online petition, the mother of one victim ("Matthew, age 23") wrote, "Those who perished [on] 9/11 walked by the Sphere every day. Give the rest of the world the opportunity to do so as well." Another signee wrote, "It's the first thing we saw after climbing down 90 stories [of] 2 WTC [on] 9/11. Preserve this memory."

I remember shortly after 9/11, a woman who worked at the World Trade Center called the fountain and the Sphere "our hometown." She beseeched that something of that anchor of community and socialization be preserved.

In the decades before 9/11, the Sphere was a key place to visit and to photograph. Office workers and tourists from all over the world gathered around it; families posed before it. I remember this from when I used to work downtown in the 1980s. Why would we exile these memories from the memorial, especially since they are acknowledged in the first section of the museum?

4. In light of the foundation's decision to place the unidentified human remains in the museum with its expensive ticket prices, a coalition of 9/11 family members is now proposing a sunlit, above-ground monument, like the Tomb of the Unknown Soldier, as an alternative. Do you think that this endeavor could possibly lead to new thinking or a solution for the Sphere?

Returning the Sphere to the memorial site would address the concerns about the high expense of entry for many families. It would offer an authentic artifact, at human scale unlike the World Trade Center tridents, that visitors would not have to pay to see. It would anchor the site in its actual history and provide a much needed icon for collective memory (heck, the gift shop could sell Sphere figurines rather than 9/11 cheese plates!). The Sphere would serve this purpose better than the appropriation of the "Survivor Tree," which was not a recognizable part of the World Trade Center site.

Furthermore, a flush-to-the-ground, black marble "Tomb of Unknowns," before an eternal flame and the Sphere, would provide the solemnity, for both the victims' families and for the global public, that the memorial site is currently missing.

Ultimately though, the story of the Sphere, and its contemplation as a work of art, resonates with me and many others. I think the sculpture should just stand on its own in the plaza as it did on the morning of September 11, which the world first believed to be just another beautiful late summer day. When the dust cleared and the area was bashed and torn and battered, the surrounding fountain and towers destroyed, the Sphere stayed standing.