When you think about eating sustainably, you might think of organic vegetables, grass-fed beef and small-scale farming. You may recite buzzwords like "local," "humanely-raised," or "GMO-free," and you may also suggest ways to save the absurd amount of food we waste. One food that probably doesn't immediately come to mind is bullfrog legs. Often associated with fancy French cuisine, frog legs don't exactly scream "accessible," and they almost certainly won't give you that warm and fuzzy feeling that the phrase "eating sustainably" imparts. Sustainable food isn't all peaceful and pleasant, however. In fact, when it comes to frog legs, it means war. 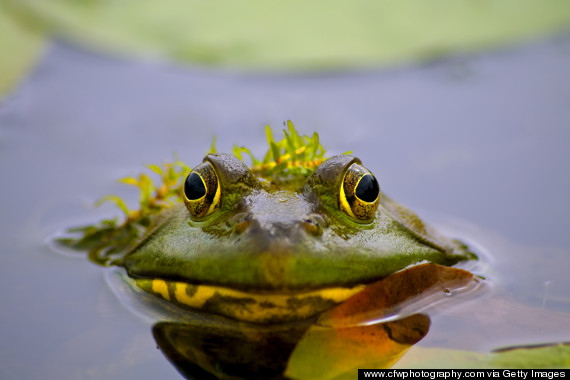 Bullfrogs, which are native to the Central and Eastern United States, are a seriously problematic invasive species in the western part of country, and one method of combatting them is to do what so many of us do best: eat. Invasive species are plants and animals that have been introduced into and reek havoc on a foreign ecosystem, and they can be very difficult to tame. According to the Oregon Department of Fish and Wildlife (ODFW), bullfrogs were introduced to the western United States as food -- yes, for frog legs -- in the early 1900s. Meghan Dugan, the Public Information Officer of the ODFW, told the Huffington Post that on a scale of 1 to 10, 10 being the most serious threat, bullfrogs are a nine across the western U.S. 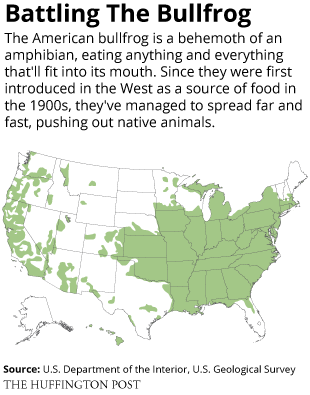 As National Geographic ominously puts it, "American bullfrogs will ambush and eat just about anything they can fit in their ample mouths." These indiscriminate appetites are dangerous for the species bullfrogs consume, and for the greater balance of ecosystems.

Bullfrogs are especially difficult to eradicate, however, because they lay so many eggs and are incredibly mobile. Their mobility makes them not only difficult to catch, but also gives them the ability to spread far and fast. They're also immune to a disease called chytrid fungus, which is one cause for declining amphibian populations across the world, Dugan explained. Some animals do eat bullfrogs, but it's not enough to compete with their mobility, extremely high egg count and immunity to this common fungus. Dugan told The Huffington Post that bullfrogs are actually cannibalistic, larger ones eating smaller ones. Heron, raccoons, mink, otters, snakes and warm water fish, like bass and pike, will also eat bullfrogs. Crayfish will occasionally eat bullfrog eggs or tadpoles. One species that could do well to up its bullfrog intake, of course, is humans.

If you've ever questioned the merit of eating frog legs, the serious threat that bullfrogs represent in states like Oregon and Washington should be enough to make you reconsider this somewhat misunderstood delicacy. What makes frog legs all the more attractive, of course, is that they taste damn good -- if you know what you're doing. Never ones to pass up the opportunity to learn more about a unique food or dish, especially if it involves unconventional ingredients and techniques, we sought out one of the most exciting frog legs dishes on the New York restaurants scene. At Do or Dine in Bedford Stuyvesant, Brooklyn, chef Justin Warner is serving an innovative take on bullfrog legs that will convince you to move them to the top of your list of ways to eat sustainably. 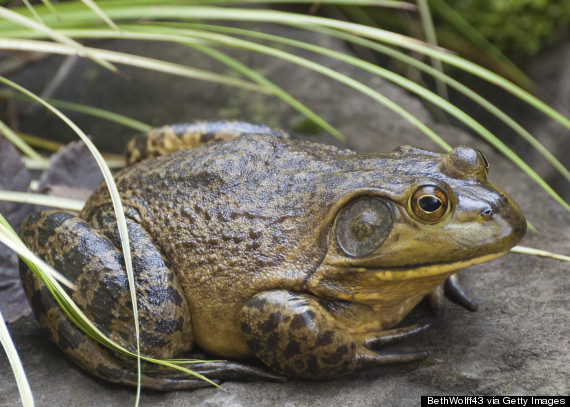 Warner uses bullfrogs that he gets from Chinatown. He marinates the legs -- whose thighs he likens to super hero thighs because they're so big and meaty -- in buttermilk and sriracha before frying them in soybean oil. Then he covers them in a house-made Dr. Pepper glaze. Brilliantly, Warner calls the legs "pond wings," because they're sort of like chicken wings of the pond. The meat tastes like a cross between catfish and chicken, and the glaze, which consists of gochujang, caper berry juice and Dr. Pepper, is sweet and spicy. Watch the video to see how Warner works his frog legs magic and fights the invasive species war one bullfrog at a time.