San Francisco -- My husband and I, Tyler, the featured couple in the recent documentary 8: The Mormon Proposition, were present at the courthouse this past week when Judge Vaughn Walker issued his 136-page decision in the case challenging California's Proposition 8. His words, issued as they were as part of a thorough, compelling edict bearing the imprimatur of a Federal Court of the United States of America, were powerful: "Moral disapproval alone, is an improper basis on which to deny rights to gay men and women. . . The evidence shows that the state advances nothing when it adheres to the tradition of excluding same-sex couples from marriage."

Thank you, Judge Walker. Your words, for us, are long overdue. 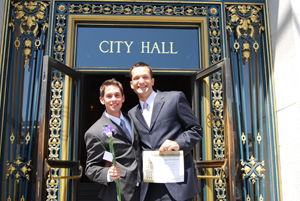 I met Tyler while home in Utah on winter break from college in December of 2001. He was twenty, I was twenty-three. The connection was immediate, the elation and emotion I felt new and exciting. But trouble lay ahead. Tyler and I were both from religiously devout Mormon families. We'd been taught from a young age that marriage was the ultimate goal for this life -- to grow up and find a life partner with whom one could share all of life's joys and trials, to start one's own family, and to instill in one's own children good values. We were also taught that to be gay was an abomination second only to murder.

And as a former Mormon missionary who worked very hard for two years in Japan to share what I thought at the time was the ultimate and complete message of truth, hope, and happiness, I struggled a long time to reconcile being gay with being Mormon. Sadly, many Mormon gays and lesbians don't prevail in that struggle. But thankfully, in large part because I'd found Tyler and was feeling for the first time the joy and wholeness that comes with allowing oneself to love and be loved, my personal convictions and relationship with God evolved. No omnipotent God, I became convinced, would deny any of us the opportunity to lead a life that is fully lived, fully shared, or fully loved.

Fast forward six years. The California Supreme Court, in May of 2008, found that the state's denial of the recognition of civil marriage and its attendant rights and protections to gay and lesbian couples violated equal protection. Our deeply engrained Mormon ethos kicked in, and we knew it was time to take our relationship to the next step -- to take on the ultimate, solid, and commonly understood status of a committed relationship. It was time to get married, time to start our own family. So we did, on June 17, the first day it was legal to do so, among a frenzy of media and happy couples at San Francisco's City Hall. It was a beautiful, historic day, full of love, commitment, and community.

The ink wasn't dry on our marriage certificate, however, before opponents of marriage equality kicked their efforts into high gear to permanently ban same-sex marriage in California with a constitutional amendment -- to pass Proposition 8. The next five months were a surreal time, as we saw our relationship demonized and attacked from all sides in misleading television ads, by confused and fearful emails from friends and families, by political grand-standing by politicians we'd previously trusted. The amount of misinformation being spewed was appalling. How did the basic issues of tolerance, equal rights, the separation of church and state so quickly become twisted and warped? By the time Prop 8 passed, by a slim 4-point margin, on November 5, 2008, a principal reason for its success was already clear: the involvement and financing by Mormon Church members.

Mormons make up only 2-percent of California's population, yet Mormon members contributed as much as 71% of the money, 90% of the volunteers, and much of the behind-the-scenes organization and messaging. It was frightening to see a single church--working in concert with other faith groups -- plainly and unabashedly leapfrog the religion/state divide to spearhead a political campaign that essentially wrote its own religious views into the Constitution of our state. And it was equally heartbreaking to see this church, an organization that purports to champion family values, inevitably tear families apart because of its efforts. My own family was quick to flatly refuse support for our marriage, and a painful rift emerged between us that only deepened as the Prop 8 fight heated up. When my hometown newspaper in Utah rejected our wedding announcement, causing a media brouhaha in the state, several siblings wrote letters to the editor in support of his discriminatory decision. Prop 8 turned our family upside down. And its passing brought a stinging slap of indignity that I'd not felt before. A majority of the people of the state of California spoke loud and clear: Tyler and I don't deserve the same legal rights and protections afforded everyone else.

Thankfully, the level of Mormon involvement in the Prop 8 fight has not gone unnoticed. Soon after its passage, Tyler and I were asked to share our story with Reed Cowan, a documentary filmmaker. Reed assembled an astounding array of stories from other Mormons, as well as a mountain of documents, financial disclosures, lobbying videos, and other evidence into a new film titled 8: The Mormon Proposition. The documentary, which premiered at the Sundance Film Festival and released to theaters in June and to DVD last month, serves as an emotional outcry against the Mormon Church's extensive involvement with Prop 8 and its historical mistreatment of its gay and lesbian members. It is instrumental in bringing needed transparency to and accountability for the real harm that has resulted from the Church's efforts.

Tyler and I have already seen the impact of sharing our story in 8: The Mormon Proposition. At screening after screening, audience members conveyed their outrage, their regret, and their new resolve to continue the fight for equal rights for gays and lesbians. We may have lost the battle, but we will not lose the war. Our central foe in this fight is not the Mormon Church, of course. It's the more fundamental misinformation and fear that breeds intolerance and discrimination. Through my experience with the documentary, I've become convinced that there's really only one way we can ultimately prevail against the false stereotypes and bogeyman myths: we must all commit to telling our stories and to showing our neighbors, co-workers, and faith groups who we are and why marriage and equal rights is important to us.

It was Harvey Milk who famously said "If they know us, they don't vote against us." We've got Judge Walker's vote, but we've still got a long way to go to the Supreme Court and in the broader court of public opinion. I hope you'll join us in telling your story and in helping to put a human face on this issue. As Tyler says at the conclusion of 8: The Mormon Proposition: "It's simple, it's just love."