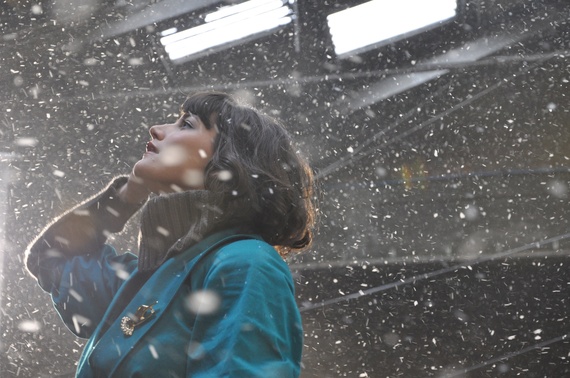 The Ninth Cloud, the latest film from Zurich-based American director Jane Spencer, leaves an indelible imprint of lovely, surreal snippets on the audience, full of beautiful quirkiness. The movie follows the adventures, or misadventures, of a young woman named Zena, who views her vagabond life with an endearing wide-eyed, open-minded innocence. The film carries a surreal sense of detachment, or even seems to warn us of the dangers of attachment in a profound sense.

As an American expat in London, Zena meets characters, like superficial, moneyed members of the Upper Crust who party off their inheritance. Her two female roommates, one a sex addict and another an agoraphobe, also supply aggravation and support. She also finds herself enthralled by an older American artiste named Bob who implies he's gay to shake off any advances. Still, it doesn't prevent her from pining for an unattainable love. She learns later it's also a worthless hope. It's nice to have ideals, hoping others can really live up to our expectations. However, Zena learns that pinning her own dreams and hopes on idealized demigods, like Bob, in Zena's case, is more foolish than taking control of your aspirations. At times, the film can move a little disjointedly and you wonder why Zena isn't showing a bit more backbone earlier on. Still, I felt sympathy and compassion for the naive soul.

As one of the few female directors around, Spencer finds the European independent filmmaking business far different than the American scene. "In Europe, there does not seem to be such a difference whether it's a man or woman directing a film. All of the films are not hugely budgeted either way, and it's a law regarding co-productions that the director - man or woman - is paid a certain amount. Honestly, it's just less sexist here. Also, there are great ways to finance here through their tax credit systems and many funds are available," explains Spencer.

In Hollywood, where it's less of a government-funded industry, it's a different scenario, which could very well be contributing to fewer female directors. Spencer says, "Hollywood has consistently not allowed female voices to come through as the artistic voices and leaders of film. I have no answer as to why that is, other than just conditioned sexism. ...Studios act as if audiences are only men and therefore should only promote a male point of view, when that isn't even true, and they know it! It looks like, however, this is changing as there is a strong movement now to correct this, at least within the studios. ... A lot of women now are demanding change and I believe there is now a great movement being made through support of each other as filmmakers - and by women like Geena Davis or Maria Geise - and many more working towards making it an equal world for women as directors in the U.S. But for now, Europe is great for women as directors, as again, here you are the 'director' -- it's not really about your gender, but about your vision and what you have done before."

In The Ninth Cloud, Spencer's vision follows along the European film genre whcih she's been a fan of since her time in the States. She explains, "I like character-driven, theme-driven films full of irony, rather than just figuring out what the plot is. And these tend to be usually European films or with a European sensibility. I have always been inspired by British film from the 1960s, most anything by John Schlesinger that he made in the 60's, a lot of the 'poetic realist' stuff from that time which was sort of grainy and realistic but caught such poetry in its visuals. I also love French film from that time and so, I tried to somehow bring this to mind when shooting The Ninth Cloud." 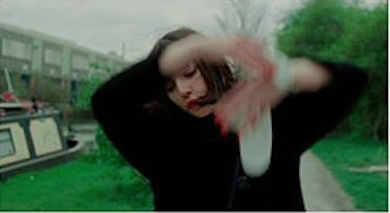 Throughout the film, Zena wears a coat. Spencer says she did the same. "When I was just out of university, I had gone through a bit of a tragedy with the death (through illness) of my mother, and took to wearing a coat all the time. It was almost a sort of second skin. I went in and out of this phase for several years living both in New York and in London, but was teased about it a lot by my friends. So, when I wrote the script I decided to give Zena, the main character, a coat she is always wearing to hide from what is called 'reality.' She doesn't want circumstance to define her; she wants to make her own reality. I had decided to do a study, with the film trying to control one's own world by almost steamrolling it through, and hiding at the same time."

It's a splendid film with Zena engaging us as we root for her, as she faces down debaucherous snobs and the betrayal of Bob. Ultimately, the human spirit does prevail and transforms Zena to be something more beautiful and elevated than the materialism and banality of bad behavior in her circumstances.

The Ninth Cloud is screening at the Cannes Film Festival on May 17, 10 a.m., at the Palais.