The Year of Yoani 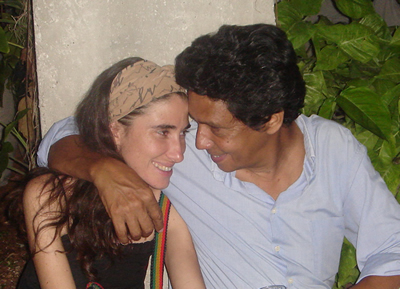 Note: The following post is from Desde Aqui, the blog of Yoani Sanchez's husband, independent journalist Reinaldo Escobar. It is both a tribute to his wife and an outstanding summary of how Yoani has emerged from complete anonymity to move the world's conscience, in the short space of a year.

Although it was April 2007 when Yoani Sanchez began her blog Generation Y, the moment when her name passed from anonymity to popularity was the year 2008. Perhaps it all began a little earlier when, in October 2007, a Reuters correspondent released a dispatch that was subsequently published in several newspapers around the world. That drew the attention of the Wall Street Journal, which devoted a full page article with a headline naming this insignificant citizen. It was followed by the Spanish newspaper El Pais on January 3rd of this year, with one of those interviews placed on the front page titled with a phrase from the one interviewed: "Life is not on the other hand, it's in another Cuba."

On the 23rd and 24th of February, when Cuba was in the process of electing a new President of the Councils of State and of Ministers, Havana was full of reporters from the most important media in the world. As if it were a Caribbean Mecca, most of them made a pilgrimage to the 14th floor of the building where this blogger lives. Literally, we had them lining up to interview her. The New York Times, Die Zeit, Newsweek, the Washington Post, Reporters Without Borders, German and Spanish television, Al Jazeera, and many more, wanted to let the readers of their different publications know about this new phenomenon.

In March, the portal desdecuba.com, which hosts the blog Generation Y, along with others, was blocked by the Cuban authorities and since then no one can access it from Cuba. Thanks to good friends living outside the Island, it's possible to update the blog and now, thanks to other friends, it's possible to read it in 12 languages.

In April, Yoani learned she had won Spain's Ortega y Gasset Prize for Digital Journalism, and in May, Time magazine named her one of the 100 Most Influential People in the World in the "Heroes and Pioneers" category. The Cuban government then denied her permission to leave the country and go to Spain to collect her prize. At the ceremony, the glaring absence of the Cuban blogger was evident, and another Cuban blogger, Ernesto Hernandez Bustos, accepted the prize in her name. The solidarity sparked by the travel ban was as gratifying as the ban was frustrating.

A month later the book Fidel, Bolivia and More was published. Fidel Castro wrote the prologue and, without directly mentioning her name, alluded to this young woman who received "one of the many awards granted by the imperialists to blow their own horn." Yoani decided not to respond, among other reasons because she started her work with a policy of not responding to attacks. She then asked that I be the one to respond. Some people didn't get the joke about invoking the macho principle that, "When a man insults a woman it should be her husband who takes her side;" maybe they should receive therapy at the National Center for Humor, or simply ask for an explanation of the joke.

In late August, Gorki Aguila, the leader of a rock band, was arrested by the police on a charge that could have earned him four years in jail. Yoani, along with other friends, went to the so-called "Jose Marti Anti-Imperialist Grandstand" where the famous singer-songwriter Pablo Milanes was giving a mega-concert, to ask, banner in hand, for freedom for the rocker. The small group was dispersed with blows, but the next day, in front of the tribunal where the trial was held, all were present and chanting the name of Gorki when they saw him freed, subject only to a fine.

On September 4 Yoani turned 33, but the gift didn't come until twenty days later when, for the second time, the government denied her permission to leave the island, this time to accept an invitation to a journalism festival in Ferrara, Italy.

In November, Yoani won the Jury Prize in the Spanish contest Bitacoras.com, and barely a week later she won the prize for Best Weblog in The BOBs contest, which involves over 12,000 participants worldwide.

In early December, a group of bloggers joined with the journal Convivencia [Coexistence] and the portal Desde Cuba to organize a meeting to exchange knowledge. The political police, knowing that Yoani had worked like no one else to enlarge the Cuban blogosphere, called her in her to tell her that the activity could not take place. When they refused to put this in writing, she told them they didn't dare to do so because they were cowards.

The newspaper El Pais's weekly magazine included her in its list of the Year's 100 Most Notable Hispano Americans on November 30th; the magazine Foreign Policy chose her in December as one of the Ten Most Important Intellectuals of the Year, as did the Mexican magazine Gato Pardo. Yoani Sanchez is named on all these lists and is the only person who appears on more than one of them.

All of these events have only served to draw more attention to the blog Generation Y, which averages ten million hits a month, with each post receiving between three thousand and seven thousand comments. In fact, it has become an authentic virtual public square where thousands of people come to debate the articles that Yoani writes and the comments posted by those who visit.

There is an unwritten rule that states that popularity attracts enemies. Throughout these months the hostility has come from two extremes: the first and most logical, are those fundamentalists who cannot accept even the smallest criticism of the government. They call her an employee of the Empire, CIA agent or, in the more benign cases, a confused person who doesn't know the evil that lurks in the outside world. The second extreme is the other fundamentalists, those who believe that anyone who can put their fingers on the keyboard of a computer must be an agent of State Security.

Among them we find some who won asylum arguing a persecution they never suffered and who now say they can't understand how it's possible that the blogger is not in jail or has not left the island. There are many who can't accept that she has been given prizes and recognition instead of other independent journalists who have suffered beatings or are serving long prison sentences. I can assure you that none of the awards received, nor the mention by the prologue writer, Fidel Castro, have been managed by Yoani.

Fortunately, there are more friends. Unlike those who denigrate her, they show their faces and give their names. There are many -- and I am privileged to witness this -- who stop her in the street to say they are readers and supporters. Among them we find some public figures, Cubans living abroad, people from here who know her through satellite dishes or CDs that circulate freely, young and old, men and women who do not know that this woman is one of the shyest people in the world, to the point that among her friends she's said to possess the gift of invisibility for her great ability to avoid being the center of attention of others.

I enjoy the infinite pleasure of sharing my life with Yoani. We have been a couple since July 1993, when she hadn't yet enrolled in the Pedagogical Institute nor dreamed of changing schools to become a philologist. We have a 13-year-old son, a goldfish bowl, and a mutt. I am entitled to say that no one knows her like I do. Her worst personal faults are a secret to her most bitter enemies and her greatest virtues have not yet been discovered by her most fervent admirers.

Because of my profession as a journalist, there has been no shortage of people who claim that I am the one who writes her articles. It's enough to stop by my blog (which almost no one visits!) to confirm the difference in styles. This doesn't mean I don't deserve part of the credit, because if I, with my emblematic floral apron, didn't wash the dishes, clean the house and water the plants on the terrace, Yoani wouldn't have time for her blog. She is generous enough to let me read her work before she publishes it in order to give me the illusion that I'm helping.

Without a doubt, 2008 has been The Year of Yoani. What no one knows is, her lucky number is 9.