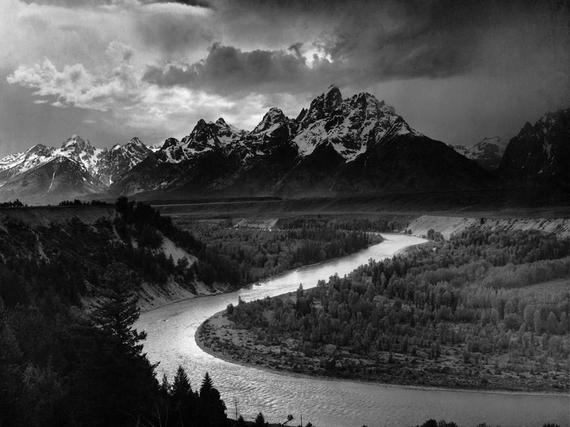 We Americans love grand, gorgeous landscapes of natural scenery. Landscape photographers and painters produce a never-ending stream of pictures of Edenic beauty. We buy images by Ansel Adams -- such as this famous view of the Grand Tetons and the Snake River -- by the hundreds of thousands, in coffee-table books, calendars, datebooks, posters, and framed reproductions. In magazines, calendars, and publicity materials, environmental organizations use photographs by him and many others.

Most of this art shows the timeless ethereal beauty of nature. It also lacks or minimizes the presence of people. The American love of the empty landscape originated among Protestants from northwestern Europe, and especially among Calvinists. Calvinism, a.k.a. Reformed Protestantism, was the theology of Puritans and Dissenters in England, Presbyterians in Scotland and America, and Puritans and Congregationalists in New England. It strongly influenced British Anglicanism and early American culture. 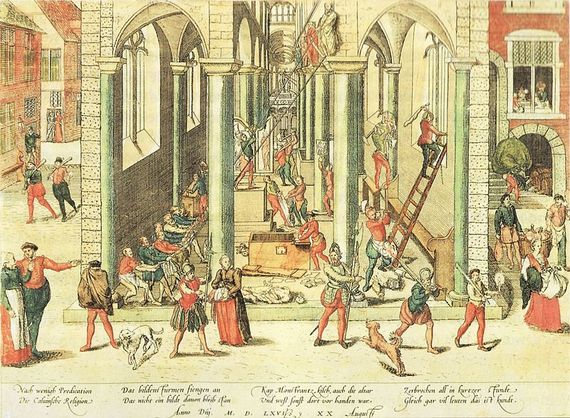 Actually, it's surprising that any art tradition came out of Calvinism at all. Calvinists were notoriously hostile to images, especially in churches. Wherever Calvinists held sway, they removed (sometimes violently) all "idolatry" from religious buildings. Since the Catholic Church had been a major employer of artists and sculptors, they were thrown out of work when the Reformation came.

Calvin did not disapprove of all art, however. He especially commended portraits and landscapes. Portraits depicted humans, the crown of creation. Landscapes depicted creation, the work of God, and reminded the viewer of his power and goodness. 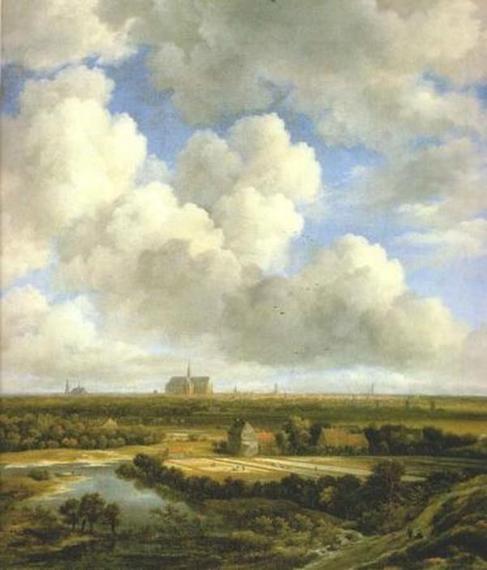 The Dutch were the first to develop a Reformed Protestant art. Calvinists were terribly worried about hypocrisy and lying, so the Dutch developed an intensely realistic style whose minute details were "truthful" to life. Obsession with "truth" would be a hallmark of Reformed Protestant artwork. The Dutch painted everyday scenes that usually illustrated a moralistic point or a popular saying. They also created astonishingly realistic landscape scenes. 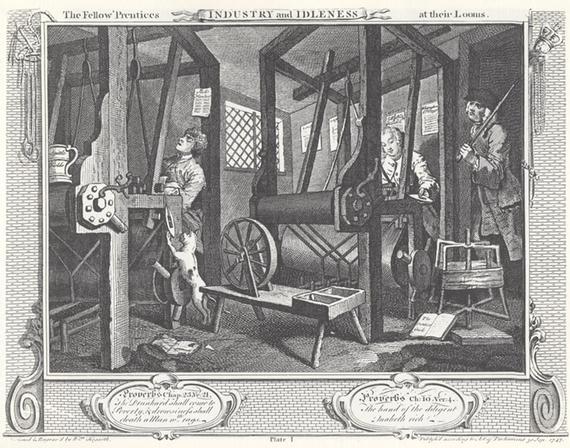 Across the English Channel, the Reformation scotched a flourishing art tradition. English art revived in the 1700s with the career of William Hogarth, a Dissenter. A successful portrait painter, he innovated on Dutch moralistic genre painting and mixed moralism and art in several popular series of paintings or etchings that illustrated the consequences of vanity, idleness, drunkenness, and other sins. Hogarth also promoted young artists. 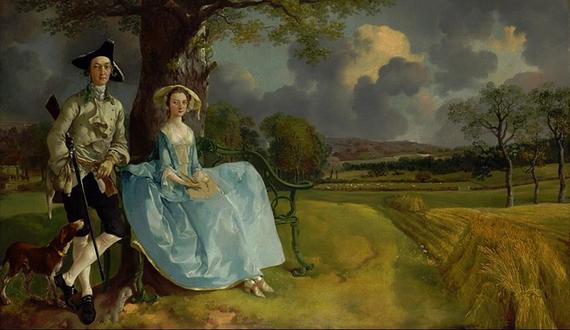 One of Hogarth's students was Thomas Gainsborough. A Dissenter from the former Puritan stronghold of Sudbury, Gainsborough painted superb portraits for a living, but he preferred landscapes. When possible, he combined the two and portrayed wealthy clients on the grounds of their estates. He included a good deal of moral commentary in his paintings. Mr. and Mrs. Robert Andrews of ca. 1750, for example, prominently includes straight rows of wheat on the right. They told the viewer that Andrews had adopted the latest agricultural invention, Jethro Tull's seed drill, and by good stewardship increased agricultural abundance. A steeple that rises above the greenery in the distance suggests piety, while a barn implies prudence and providence. Gainsborough was the first in the line of great English landscape painters, including Constable and Turner. 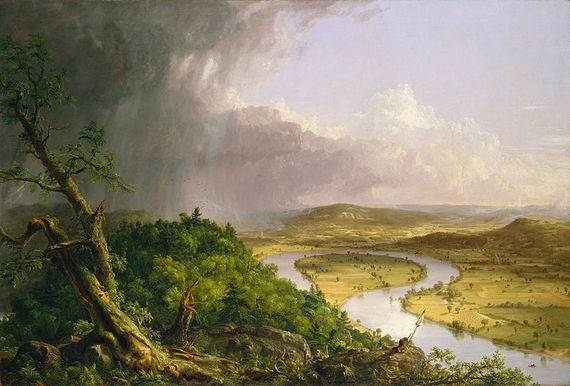 In America, Calvinist prejudice against fine art was pervasive. No painter did more to convince Americans that art could serve higher, moral goals than Thomas Cole. Cole was born to Dissenters in another former Puritan stronghold, Bolton, England. He came to the United States as a teenager, determined to be a great artist. Religious purposes informed his art.

Cole's biggest legacy was his role in founding the Hudson River School of landscape artists. They reveled in wild scenes of New England, the Catskills, and the Adirondacks, which unlike long-civilized Europe showed the direct hand of the Creator. In Cole's famous Oxbow of 1836, God's presence speaks from the storm in the wilderness on the left side, while the peacefully prosperous landscape to the right, as with Gainsborough, told of the bountiful stewardship of a godly, moral people. It was a New England landscape, where dwelt the Congregational descendants of Puritans. 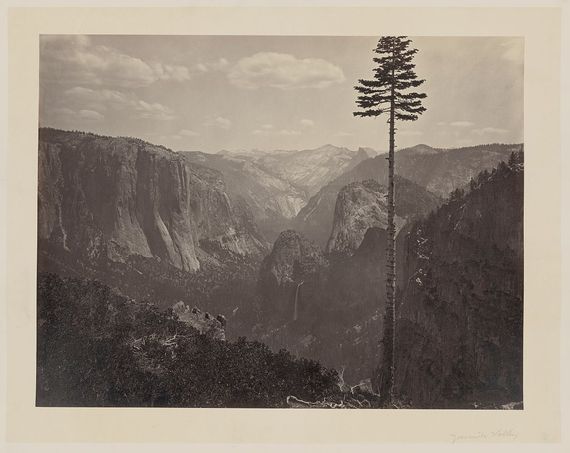 Photographers discovered Yosemite Valley even before most painters got there. Men like Presbyterian Carleton Watkins and Congregationalist George Fiske took the first photos of many now-iconic views. Adams knew and studied his predecessors' images. His photography captured physical as well as a spiritual truth of landscapes. He also spawned imitators. 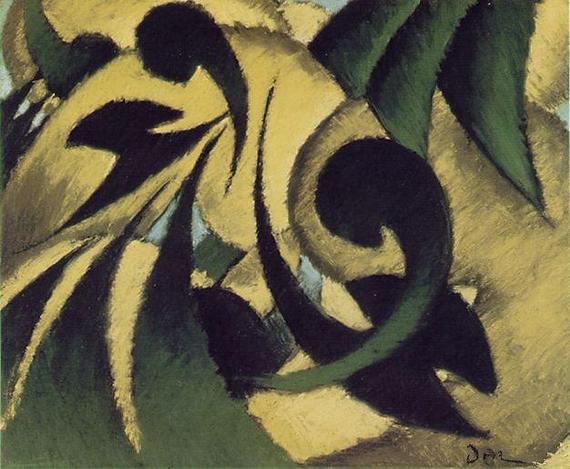 Painting could never be as faithful to the truth of nature as photographs were. By the early 1900s, many abandoned obsessive realism and expressed the spiritual truth of landscape through abstraction, as in Arthur Dove's Nature Symbolized No. 2 of 1911, with its suggestion of wind and trees. 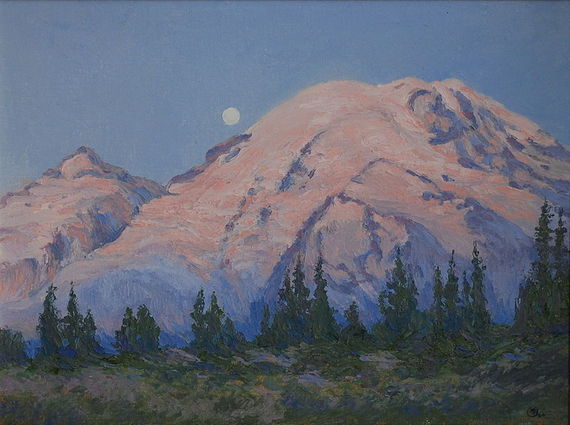 Strict Calvinism faded. Yet denominational cultures still fostered Calvinist values. For example, painter Mary Agnes Yerkes, raised Congregationalist, continued through the twentieth century to paint ethereally beautiful landscapes of nature, usually excluding people and their works from the frame. You don't have to grow up in a Reformed church to appreciate the art of the pristine landscape, but it is no surprise that such a large proportion of the artists themselves did. More than five centuries after Calvin and almost two centuries after Cole, the art of beautiful uninhabited landscape still moves and inspires us.