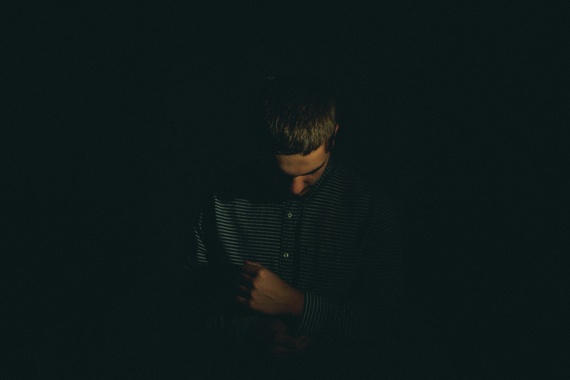 I talk a lot about failure. It's something that I've come to grips with many times over the years, failure and rejection and that feeling like your stomach has dropped away from your body.

People ask me how I got to the point where I can write and have an audience who give a shit, where I can work and create and make things for a living. I think there's this idea that maybe I have a simple hack or methodology that can make it all fall into place. But it's just perseverance, and stubbornness, learned through years of rejection.

I've become so accustomed to having people say no, to having people reject me, that I've learned how to claw my way back from every failure. That's the trick, is to always find a way to get up, dust yourself off, and go tearing back into the ring.

I went through my emails today, and I read rejection emails from 20 companies who wouldn't hire me. 20 companies and jobs I applied for, with a success rate of absolutely zero.

I honestly thought that I was amazing enough to deserve these jobs. It turns out, I wasn't. Each of these companies said no, for good reasons. And every rejection was a challenge, proof that I had work to do. A lesson in how to get up and keep going.

There's literally hundreds more, but these were the dream jobs. And I didn't get 'em. The point is, I've faced the same rejection you've probably faced yourself. I've had to open up those generic emails, all of which say something like this:

Hi Jon,
We feel honored that you've shown an interest in [Super Awesome Company]. Thank you so much for exploring opportunities with us. We acknowledge that a career move is a big step, and we want to keep you informed of where you stand in the recruiting process. Unfortunately, there are other applicants whose qualifications are a better match.
Thank you again,
Super Awesome Company.

Over, and over again. Feeling the rush of possibilities, every time my phone vibrated, only to read a rejection that hadn't even been personalized for me. I felt lost, and I felt hurt, and I took it personally.

I was entitled, and at first, I thought every one of those places should have realized how lucky they were to have an application from me.

Fast forward a few years, and I'm still standing. I survived. The rejection didn't fucking kill me. I made my own way, I got back on my feet, I got back to doing what I do best -- making killer content and trying to start businesses, no matter how likely they are to fail -- and I'm still punching.

Rejection is something that happens, and it happens over and over again, and it will keep happening no matter how far you get. But you keep working, and you don't let it drag you back into the shit. Every rejection, every "No", is a challenge to rise to.

When I got those rejections, after the feelings had subsided, I started to ask why I had failed to get one of those jobs. And it wasn't because they hated me, and there wasn't any excuse I could fall back on. I just didn't have the skills, or the experience or the qualifications they needed.

If you're experiencing rejection, right now, it doesn't mean you always will. It probably means you've got some work to do.

You know Buffer, one of the companies I applied to? Back when they turned me down, I had nothing, and no reason for them to want me on board. But today, their CEO, Joel Gascoigne reads my blog and follows me on Twitter.

You know HubSpot? I missed out on the job because I didn't have the edge they needed, and that was fair enough. Yesterday, their Australian marketing director, Ryan Bonnici sat down with me at their Sydney HQ to do a live broadcast on their show and talk about how to build an audience. It was awesome.

Why? Because I've spent the last years building my skills, listening to their feedback, working my ass off and proving that I can do this. Following my passions and putting in the time, instead of expecting the world to be handed to me.

My goal is to one day meet some of the CEOs of those companies, every one that didn't hire me, or to get up and give a talk to them about entrepreneurship and writing and all the things I'm passionate about. From Apple to Buffer, from Google to Buzzfeed.

Not to prove anything to them -- but to prove something to the kid I used to be, who faced rejection and hadn't yet learned what to do with it.

When you get rejection, it's a call to action. It's a piece of positive feedback that says you're not ready just yet, but someday you might be. Someday you could be. Someday, you will be.