The New York art scene isn't only about New York anymore: across the country, artists are collaborating digitally and virtually; gallerists are looking beyond their own backyards for work; and buyers are venturing to neighborhoods outside of Chelsea and Williamsburg to discover the next art star.

Case in point: Near the railroad tracks on Atlanta's Westside, artist Karen Schwartz paints in her studio. Through the open window, the sound of birds wafts into the space along with shafts of sunlight. When I meet Schwartz for an interview in April, she is preparing for a one-woman show in Brooklyn, New York, and her nearly-finished work surrounds us. Expressionist yet contemporary, the figurative paintings are dark and deliberate, with a sense of humor and a fluidity marked by bats, bunnies and other animal references that flutter, bounce and stomp through her canvases. Schwartz says it required a lot of deep digging to do the "physical and visceral" work of self-discovery that these emotive paintings transmit.

A native New Yorker who headed South to earn a doctorate in psychology, Schwartz, a practicing psychotherapist, began to fully realize her artistic talent when she attended the Fine Arts Atelier at the King Plow Arts Center. Here she met fellow New York transplant, Michael David, a prominent painter who became her teacher and mentor. David teaches in Atlanta and is also the curator for Life on Mars Gallery in Bushwick, a neighborhood in Brooklyn that's exploding with art spaces of every size and kind.

Schwartz's show, titled "Down the Rabbit Hole," opened at Life on Mars April 24 and runs through May 31. Although it's not specifically dedicated to the memory of her mother, who passed away while Schwartz worked on the series of paintings, the collection displays an element of feminism disguised as motherhood - that of her mother and her own.

Schwartz admits it was difficult to fly the ATL-LGA route several times per month to be with her mother during her last year. Yet, the cacophony of Manhattan faded each time she stepped into her Atlanta studio. "There's something freeing about getting out of the center of the action. I think painters have always done this," Schwartz says."It's stimulating to capture something with your mind and then to be alone with it somewhere else."

The heartache was not erased by the miles nor the Southern train whistle on the nearby tracks, however. The result of the months of back-and-forth travel influenced a show that is full of vibrant hues, edgy lines and vigorous motion punctuated by resolute stillness and sadness. The red lipstick that dances across the mouth of "Pink Lady," a portrait in Schwartz's show, says it all: in life and in art, it's easy to paint on a smile to mask the layers of emotions underneath. What's more difficult is to convey the nuances as brilliantly as Schwartz has done in her work.

It's fitting that the exhibition is up during Mother's Day; last year Life On Mars hung a group show called Motherlove, which also featured Schwartz's work, along with paintings by Joan Snyder and quilt artists Mary Lee Bendolph and Loretta P. Bennett. This year, the theme of celebrating women artists continues: the gallery continues its nod to "The Women of Ab-Ex" with a May 20 symposium featuring art scholar Eleanor Heartney; Norman Kleeblatt, chief curator of The Jewish Museum; art historian/author Irving Sandler; and critic Phyllis Tuchman.) 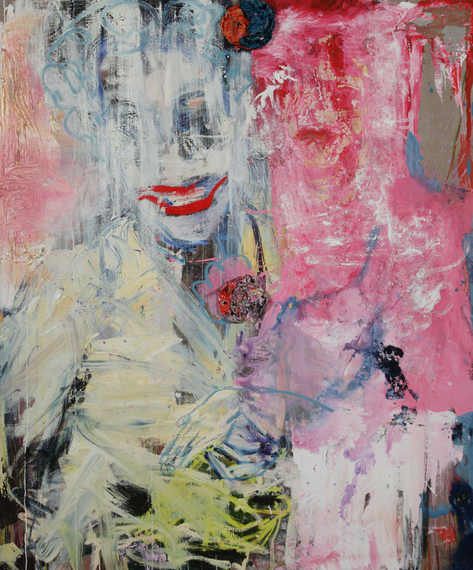