"That one sounds like mortar fire," Mohamed said to me. "And that was definitely a sniper." My Iraqi friend and I were in Coney Island for the Friday night summer fireworks. Listening to the thunderous explosions over the water as we rode the Wonder Wheel, memories of life in war-torn Iraq inevitably came to mind.

I wondered what else must be going through his head. Just two weeks ago, he had been a refugee living in the slums of Damascus, Syria.

To date, 1 in 5 Iraqis have left their homes. Two million have left the country, and another two and a half million are internally displaced. After the 2003 bombing of the Shiite shrine in Samarra unleashed a wave of sectarian clashes, those with the means to do so began fleeing in droves. Many have chosen to wait out the violence in urban areas of Jordan and Syria, the two countries that host the most Iraqi refugees.

Mohamed had been living like most of them. Unable to work legally in Syria, he relied on the meager savings his parents could send him from Iraq. Over the course of one year, he moved 16 times to a series of filthy, roach-infested, overpriced apartments. It's a seller's market. Iraqi refugees are taken advantage of by just about every crooked landlord who realizes how desperately they don't want to be sent back -- war profiteering on a new level.

I first met Mohamed in 2007, when I interviewed him for a video piece on refugees. We became fast friends and during my time working in Syria, we spent our days exploring Damascus, a city foreign to both of us.

There during the presidential referendum, we found that Mohamed's Western appearance made for some interesting fun. We crashed referendum parties and told the revelers that we were both models from New York City -- everyone from average citizens to high government officials wanted a photo with "the foreigners." Little did they know, Mohamed was one of the 1.2 million Iraqi refugees who were placing a severe economic, social and political burden on their country.

The more I got to know him, the more I wanted to document his life. Yet at the same time, sitting by and simply watching his life unravel didn't seem right to me.

I wanted to bring Mohamed to the United States. The eternal optimist, I took a photo of a bench on the Brooklyn Heights Promenade, where one can take in the quintessential view of Manhattan. "We'll be sitting there together one day," I promised him.

I spent a collective five months in Damascus with Mohamed. Throughout this journey -- at times both tragic and entertaining -- I made a good friend, became part of an Iraqi family and realized the reach of the power that I have as a U.S. citizen in doing my part to clean up the mess that's been made in Iraq.

Life Before the Invasion

The son of a diplomat and an attorney, Mohamed's middle-class family lived in a large house in central Baghdad.

Socially, his life was not unlike that of men his same age living in a Western culture. As a teenager, he joined a garage rock band. His father begged him to cut his long hair, disapproved of his attire and was incensed when he got a tattoo.

Obsessed with American culture, he taught himself English by watching American sitcoms and music videos, covering the Arabic subtitles on his television with black tape. His two favorite shows were Friends and Frasier.

Unfortunately, what passed for teenage antics was not condoned as he came of age, and his American affectations became the subject of suspicion and ridicule.

Despite being a cultural outsider, life was manageable. Scouted by a modeling agency at the age of 18, a new world opened up to him. He flew to Lebanon and Turkey and had his first taste of life outside a culture he too restrictive for someone like him. Sipping champagne at fashion industry parties and kissing a man for the first time, he felt truly alive.

Mohamed's budding modeling career came to an abrupt halt in March of 2003, when, in the middle of his 20th birthday party, his country was invaded and the war began.

In 2005, a note arrived on his family's front doorstep: "Get your gay son out of the country or we'll kill the whole family." Two weeks later, Mohamed's tearful mother put him on a plane to Jordan.

Seeking Asylum, Pleading for His Life

When a refugee arrives in a host country, they have the option to register with UNHCR, after which they submit to a series of interviews with the agency. UNHCR primarily keeps track of and distributes aid to refugee populations. In rare cases, UNHCR refers them for resettlement to another country. This would be our ultimate goal for Mohamed.

In the fall of 2005, Grand Ayatollah Ali al-Sistani called for the killing of homosexuals "in the worst, most severe way possible." As a result, a spate of brutal attacks against homosexuals began throughout the country.

Being "different" was something Mohamed had considered a curse his whole life. Now we hoped it could turn into a blessing.

I sent Mohamed's story to a number of people in positions of power. Representatives from Human Rights Watch and Refugees International, and openly gay Congresswoman Tammy Baldwin, gave me letters of support on his behalf.

Using connections I'd made as a journalist, I presented Mohamed's case to a representative at UNHCR. She sent his full dossier to the Senior Protection Officer. The next day, he received a call - instead of having to wait six months for an interview, like most Iraqis, he would be seen right away.

The night before his interview, Mohamed crouched before my feet on the floor of my apartment, desperately sorting through the pile of documents he'd had to scramble together before his swift departure from Iraq. His passport, personal IDs, modeling contracts and college graduation certificates were the only proof of his former life.

Here he was -- preparing to meet with a complete stranger working for an enormous bureaucratic organization, to plead for his life.

Mohamed went through four UNHCR interviews, and ultimately, was recommended for resettlement to the United States. It was a huge reason to celebrate, but certainly not the end of the road.

He would spend the next eight months anxiously waiting to meet with representatives from the United States.

These multiple "life interviews" were humiliating and exhausting. Mohamed interviewed four times with the State Department, each time recounting the painful story of his two years in exile. Before meeting with The Department of Homeland Security, he realized that this moment would shape the rest of his life.

This time, the questions were tougher. "Have you ever had sex with a man?" Mohamed found this too personal to answer. He was also forced to sign the Selective Service Registration forms, stating that if there was a draft, he may have to go back and serve in Iraq. This further unnerved him.

Over the next few months, Mohamed's heart raced every time the phone rang, as he hoped it was news he wanted to hear.

Soon Christmas arrived, and Mohamed's mother and extended family came to spend the holidays with him. Having been apart from his young nieces for close to a year, Mohamed was saddened that they'd developed the same habits of the adults in the house -- staying up throughout the night and sleeping all day. The lifestyle had taken its toll. Five year-old Noona's skin had become jaundiced from lack of sun. 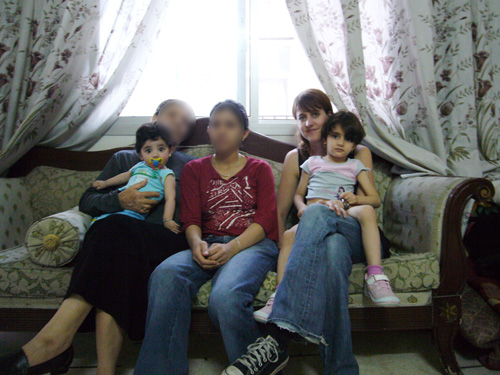 Unaware of the severity of the situation, she kept asking her parents to take her back to Baghdad so she could play with her friends. As a Westerner, I tried to provide her with new distractions. We played hide-and-seek, had fun with coloring books, and became so close that she insisted on sleeping with me every night.

Mohamed's mother, once an established civil rights lawyer, was hoping to return to work in Baghdad. She had asked me to bring her a large bag that looked like a purse -- something big enough to carry her files, but inconspicuous enough to not draw attention to her as a lawyer, since professionals have been targets for murder in Iraq.

She shared with me her feelings of degradation and loss, both of her career and her now struggling family. "I used to work. I wasn't only sitting around the home, preparing meals and watching television, like you see me now. We used to have a good life in Baghdad."

Through this family, I met a broken people, Iraqis living in a physical and emotional void, yet trying desperately to hold onto some vestiges of their former selves.

Good News, and a New Life

In July 2008, I got the call we'd been waiting for. After one and a half years of advocacy, Mohamed had been accepted as a refugee. 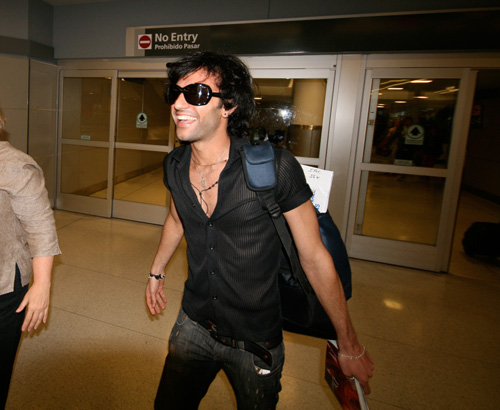 He flew to New York a month later, and I started introducing him to life in the United States. I taught him how to navigate the subway system, gave him advice on finding a job, and struggled to explain our confusing health care system. The U.S. government would provide Mohamed with Medicaid, food stamps, and a stipend of $240 per month, as well as $900 toward rent. But the financial benefits only last for three months; he had to get acclimated quickly.

Mohamed is staying with me in Brooklyn as he gets on his feet. I see him going through various stages of excitement, optimism and fear on a daily basis. After having lived in forced stagnation for over four years, it's hard to find the motivation and confidence to revisit the dreams he once had.

Mohamed Is the Exception, Not the Rule

In recent months, much has been said in the media about Iraqi refugees going back to Iraq as a result of the success of "the surge." The truth is that most of those who return are doing so because either they've run out of money or their visas have expired. Many of those who return find that another family has taken up residence in their home.

After receiving criticism for not having done enough to respond to the crisis, the Bush administration recently began taking in more Iraqi refugees -- in 2008, more than 14,000 Iraqis were accepted into the United States. But for the country that started this war, that's a drop in the bucket - just a third of 1 percent of the total number of those displaced. After the Vietnam War, hundreds of thousands of Southeast Asians were authorized and ensured admission to the United States each year.

Today, Mohamed says that without having had me as an advocate, he could have never done this on his own. As an American and a journalist, I was able to make him stand out as more than a face in the crowd, and helped him navigate the perplexing bureaucracy of being a refugee.

His painful story is one of many. Mohamed and I sit on "our bench" frequently, taking in the magnificent view of Manhattan and reveling in our victory, but we can't help but remember all those who were left behind.