After spending the last year and a half soaring high above the stage floor of the New Amsterdam Theatre aboard a magic carpet, Courtney Reed (who plays Princess Jasmine in the Broadway production of Disney's Aladdin) was ready for some more down-to-earth activities. 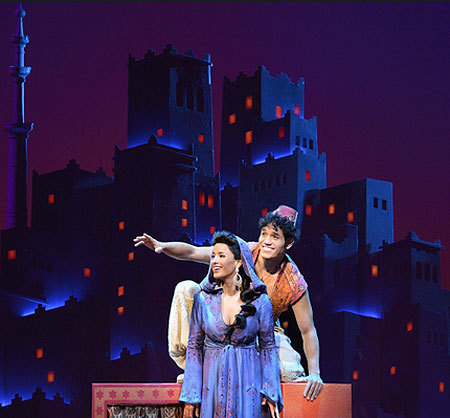 "I was looking forward to spending some time on the Outer Banks of North Carolina. My family and I go there every year. We've been going to this beach house there ever since I was born. It's a family tradition," Reed recalled during a recent phone interview.

But when Reed tried to get her vacation request approved back in late May, Disney Theatrical came back with one caveat.

"At that time, they asked if it might be possible -- right in the middle of my vacation -- for me to leave the Outer Banks for a day. To come back and do something really special," Courtney continued. "Mind you, the people who produce Aladdin couldn't tell me what I'd be doing. Not yet, anyway. They were being pretty mysterious about this whole thing." 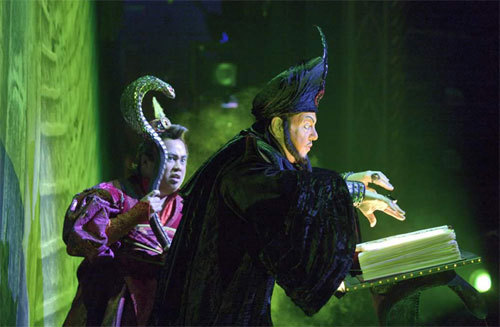 Reed agreed to Disney Theatrical's terms but then couldn't stop wondering what they were being so secretive about. In the end, it was Courtney's boyfriend who put all of the pieces together.

"When I mentioned that they needed me to come back from my vacation for a day to do this thing that I wasn't supposed to tell anyone about, he immediately said 'I bet it has something to do with the White House,' " Reed said. "And in the end, that's exactly what it was."

The cast of this Tony Award-winning musical had been asked to provide the entertainment at the 2015 Kids' "State Dinner." Which was held in the East Room at the White House back on the morning of July 10th. 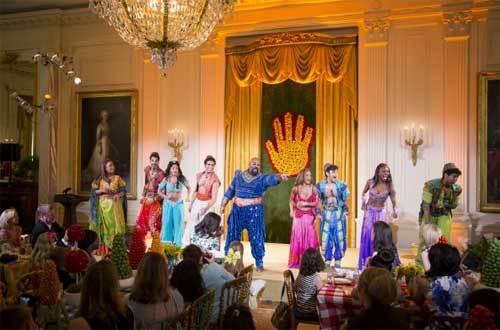 Now contrast that with what poor Adam Jacobs, James Monroe Iglehart, and 20 members of the cast and crew of Aladdin went through on the night of July 9th as they schlepped from NYC to DC. To explain: Disney Theatrical had arranged for this bus to arrive at the New Amsterdam right after the curtain came down at that night's performance of Aladdin. And Jacobs, Iglehart and the other cast members were supposed to hop on board sometime between 9:30 and 10 p.m. and then doze while this bus is driven down to their hotel in Washington DC.

"But for some reason or another, the bus never shows. And it takes 'til almost 1:30 for the other bus to arrive. Which means that they then don't get down to DC 'til almost 6:30 in the morning on the 10th," Reed remembered. "And given that we were all supposed to be at the White House at 7:15 a.m. that morning ... Well, everyone's in pretty rough shape at this point." 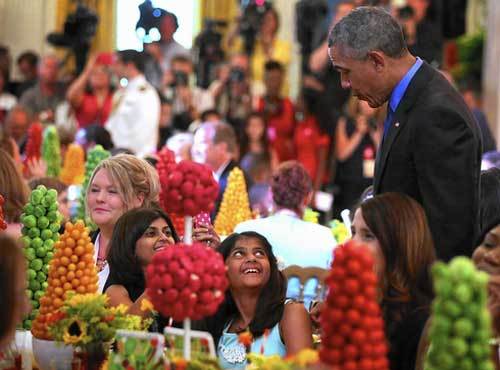 So the cast of Aladdin is then taken a quick tour of the White House before they're then taken upstairs to a function room. Where these still-road-weary performers can prep prior to taking the stage in the East Room.

"Now we had been told in advance that the Kids' 'State Dinner' was really more of a First Lady thing. That -- because teaching kids to eat right is Michelle Obama's passion project -- we shouldn't expect to see the President during our time at the White House," Courtney continued. "So when the staff comes in, gathers us up and then starts putting us in specific seats -- ladies in the front, guys in the back -- I just figure that they're getting us ready to have our picture taken with the First Lady. But then in walks the President!"

Evidently President Obama had heard about everything that the cast of Aladdin had gone through in order to make it down to DC that morning. And because he wanted to personally show his appreciation for these folks making such a big effort to be part of the First Lady's event, he headed upstairs prior to the kick-off of the Kids' "State Dinner." 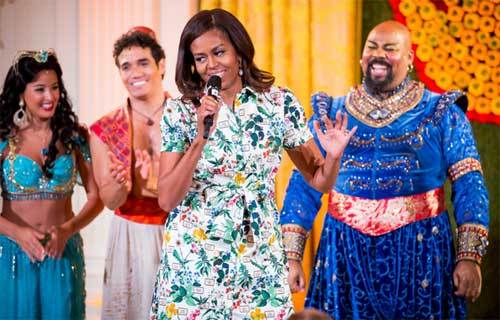 "And when the President came in the room, everyone forgot about all of the sleep they didn't get. No one knew what to say. Everyone was speechless," Reed recalled. "And the President was just so charming and so delightful. He shook all of our hands and repeated our names back and looked us all straight in the eye with a firm handshake. It was an experience I'll never forget. When he left, that's all we could talk about 'til the performance. 'Oh my goodness, I can't believe that that happened.' Girls were crying. It was this whole slew of emotions. It was amazing. It really was."

Newly energized, the cast of Aladdin then headed downstairs to the East Room. where they then performed a 20 minute concert version of this Disney Theatrical production (which -- over the past few months -- has blown past The Book of Mormon to become the third best-selling show on Broadway, right behind Wicked and The Lion King).

"Now you have to understand that the stage in the East Room was really small. And our job that morning was to take a show that's big as Aladdin and then make it work on this tiny, intimate stage where the wife of the leader of the free world is sitting just six inches away from you. Now factor in that you're doing this having had no sleep," Courtney enthused. "That's why I'm so proud of our company. Even working under this kind of pressure, these sorts of conditions, they were total pros. Their voices were still on point. They were able to sing that early in the morning. They just dazzled this group of kids who -- as the First Lady reminded us later -- had probably never flown on a plane before, never mind not having seen a Broadway show before." 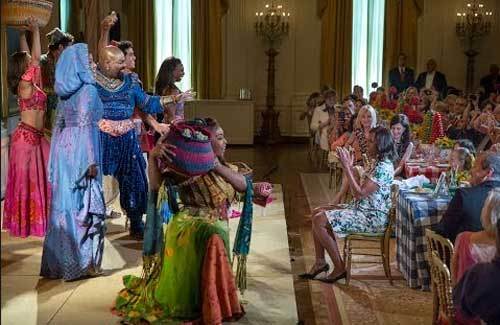 And once Jacobs, Inglehart and the other members of Aladdin's ensemble had finished performing at the 2015 Kid's "State Dinner," after a quick photo op with Michelle Obama ... Well, it was time to get back on the bus. Because -- believe it or not -- they needed to back in New York City by 8 p.m. for that night's performance at the New Amsterdam.

"Whereas I hopped on a plane and -- by 8 p.m. -- I was back on the Outer Banks with my family having dinner. And they were all talking about how they'd just seen me on television at the White House performing for the First Lady," Reed laughed.

So long story short: If you're looking to win this year's "How I Spent My Summer Vacation" competition, don't go head-to-head with Courtney Reed. Because Princess Jasmine's tale of how-she-met-the-President-of-the-United-States will almost certainly beat your falling-asleep-at-the-beach-and-getting-a-third-degree-sunburn story.