Leading cryptocurrency news outlet Bitcoin.com echoed my earlier reporting of Digital Currency Group's Barry Silbert in a well written piece by reporter Jamie Redman. You can read their round-up of my claims here.

My reporting on every aspect of that story is sound and well sourced. Barry Silbert's Digital Currency Group did indeed buy out CoinDesk earlier in the year, and CoinDesk's coverage of Ethereum since that acquisition has shifted to a degree that is "discernible."

Barry Silbert, previously an investor focused only on Bitcoin, has exploited the resources of his name and platform to promote Classic, despite the fact that it is arguably useless - an insecure orphan chain with insufficient hash rate to guarantee long-term network health. At time of publication, Classic has a trifling 647.3 GH/s hash rate, whereas the main Ethereum chain is running at around 4,404.6 GH/s.

Silbert was indeed investigated by the S.E.C. and subsequently forced to disgorge some of his firm's gains in connection to a prior project, BIT Shares; I linked to the S.E.C.'s case law file in that piece. It's not my "opinion" that Mr. Silbert faced regulatory scrutiny - it is simple reality and a matter in the public record.

I own only two cryptographic assets, Ether and Bitcoin, and have never held more than US $10,000 of any "alt coin" project I have covered, making it awfully difficult for critics to brand me as a "pumper" - although deflection and ad hominem are common enough tactics when a wealthy man is questioned by the media.

During a RT America broadcast a couple years ago, I suggested that viewers "Go out and buy some Dogecoin," a moment frequently used to brand me as an alt coin pumper. Of course my detractors don't ever tell the full story: that was clearly a joke if you watched the full segment. I was being interviewed by a friend, former RT host Abby Martin, and we were discussing how cryptocurrency is a more valid technology, in my view, than centrally issued fiat currencies. My argument was that in contrast to the absurdity of central banking, even going out and buying some silly Dogecoin makes more sense. At that time, and at every other time in my life, I have not held any Dogecoin - I didn't find its economics or community to be compelling enough.

Separately, yesterday's reveal that Swiss financial services giant UBS is working with Ethereum and will soon be making an announcement was, and is, well sourced. Other multinational banks are expected to announce involvement with the Ethereum protocol, but since their discussions with The Huffington Post have been off the record, I will not be sharing details of those projects until the firms themselves choose to do so - or until their involvement becomes public knowledge through independently sourced pieces elsewhere.

For what it's worth, Barry Silbert appears as publicly committed to Ethereum Classic as ever: 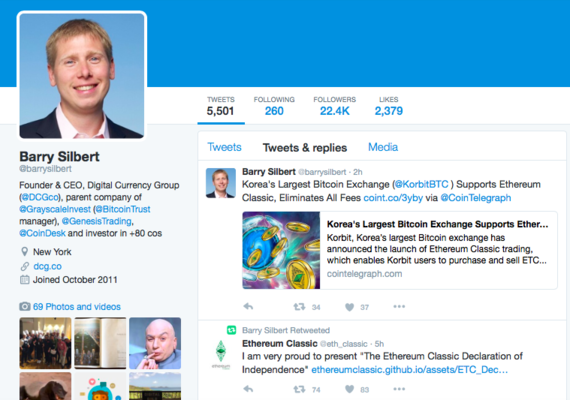 Disclosure: At time of publication, I hold some bitcoin, ether, U.S. dollars, and gold in my long term portfolio.