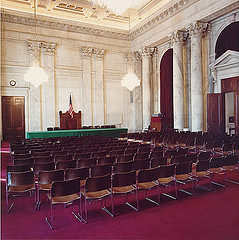 The setting was the beautiful Caucus Room in the Russell Senate office building (pictured above). The event focus was "Afghanistan: Basic Questions - Strategic Choices," organized by the Rand Corp., with Steve Clemons of NAF. The backdrop was Pres. Obama's nighttime visit to Dover AFB, doing something George W. Bush never did or allowed. Not only being present when the C-17 landed with coffins coming back from Afghanistan, but with family permission, allowing the public to view the cost of the wars we fight. None of this is making a dent with Charles Krauthammer, who today writes that Pres. Obama should wave his magic wand and rectify Bush's actual "dithering" on Afghanistan for years to make a war gone wrong years ago turn right. As Rand's Arthur Munoz said yesterday, our Afghanistan strategy "has been incoherent for years." Mr. Krauthammer missed it:

It's as if Obama's presidency hasn't really started. He's still taking inventory of the Bush years. Just this Monday, he referred to "long years of drift" in Afghanistan in order to, I suppose, explain away his own, well, yearlong drift on Afghanistan.

[...] In Iraq, the heavy footprint -- also known as the surge -- dramatically reversed the fortunes of war. In Afghanistan, where it took longer for the Taliban to regroup, the failure of the light footprint did not become evident until more recently, when an uneasy stalemate began to deteriorate into steady Taliban advances.

That's where we are now in Afghanistan. The logic of a true counterinsurgency strategy there is that whatever resentment a troop surge might occasion pales in comparison with the continued demoralization of any potential anti-Taliban elements unless they receive serious and immediate protection from U.S.-NATO forces.

This is so typical. All that Afghanistan needs is more troops, according to the Krauthammer crew. Well, yesterday, Sen. Levin, the last to speak at the event, made a point of putting them in their place:

"Fueling the drama, there are some in Washington who are willing to toss cheap and easy lines about presidential 'dithering,' or alleging the president is 'afraid' to reach a decision, in an effort to push him to immediately, indeed automatically, endorse recommendations from a general who is highly capable, but whose focus is understandably more narrow than that of Secretary Gates or President Obama." - Senator Carl Levin

Levin went on to invoke John F. Kennedy and the fact that the Bay of Pigs likely made Kennedy wish he'd deliberated a little longer before that ill fated military adventure was launched. Reporting live from the Caucus Room, the actual place where John F. Kennedy announced his presidential run, the room resonated with history's lessons.

The list of luminaries at the Rand event is long. Everybody in the room understood the gravity of the situation, with Zalmay Khalilzad putting it bluntly:

"Policy in Afghanistan is in a state of crisis."

The event yesterday was sterling, that needs to be said before continuing.

The panelists all qualified, varied and intellectually impassioned, however, every single participant was male. The word "girls" was not uttered until Ambassador James Dobbins did at the end of the program; not one person referencing Afghan women, even as they gave speeches and delivered eloquent defenses of their positions, some saying there was no hope for Afghanistan, none understanding the irony that without women involved in the process Afghanistan will never be stable, so in their forgetting their importance rendered their judgment on Afghanistan obvious. There was one moment when Stephen M. Walt broke out, making the point that there is an argument to be made on humanitarian grounds for being in Afghanistan, but no one's making that argument for our occupation. That he'd be glad to discuss it on these grounds, but no one is making that argument. But again, women were not mentioned, not part of any calculus, minus Dobbins.

It wasn't until Zalmay Khalilzad, then Sen. Levin, that any humanity crept into the discussion. Yes, the panelists talked about making Afghans central to the new strategy, but again, how can you talk about Afghanistan without talking about women who are central to any developing nation's promise? I've done so many times, delineating what we owe Afghanistan. Levin at least brought a real empathy towards the Afghans, as did Khalilzad, especially on the economic front. Levin's remarks stressed Afghanis over our involvement, with troops secondary to so many other issues, something I'm convinced of as well.

I've spent hours and hours and days and days over the last 6 months going to every conference you can name on Afghanistan (and Pakistan), listening to experts from across the spectrum in my work. I've reported on every one. There isn't one person making the case that more troops is the silver bullet, the magic answer, the one thing that will solve our challenge in Afghanistan.

Frankly, you can count me among those who are a bit worried that the deliberation is taking longer than I'd like, but considering winter is coming in Afghanistan it's not like fighting will escalate any time soon.

As for those waiting for the Nov. 7th run off, it has been described to me over and over again in one word: charade. Some saying there isn't any or much work being done on the ground in Afghanistan to secure a fairer vote.

Yesterday at the event, an Afghan American citizen got up at one question period and said something impassioned: Karzai must go.

Mr. Karzai has been an enemy to the women of Afghanistan, which he's proven over and over again, including earlier this year when he sanctioned the Marital Rape Law that caused an international uproar. Talking privately with Fred Kagan, who was a panelist, I reiterated that women in the Afghan parliament are often paid proxies of powerful men, with threat of death over their heads if they don't do as they are told. Of course, Kagan said it's not just the women. That may be true, but no man lives under threats that challenge their very human rights like Afghan women and girls do under Karzai's rule.

The looming question over anything Pres. Obama is weighing remains: What if Karzai "wins" the runoff? After the story about his brother being linked to the CIA, do you think any Afghan isn't aware of the collusion to take power, all seen as being orchestrated by the U.S? A centralized government is something Afghans will never embrace. Just look at their history, something we must use as a guide not fight against to change.

Bottom line of yesterday's conference came from Rand's Arturo Munoz, who also made brilliant arguments for tribal engagement and utilizing Afghans at every turn:

"We're in a life and death situation."

Deliberate, Mr. President, but with due haste.