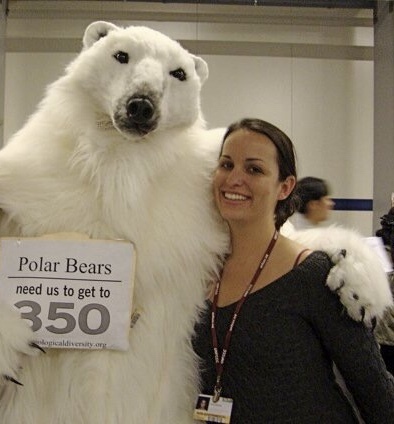 The author of this article at COP in Copenhagen, December 2009

The deadline for two long weeks of climate negotiations in Peru had already passed when the man who had presided over the entire event Manuel Pulgar-Vidal, Peru's environment minister, announced the Lima Call to Climate Action. At five pages, the document is modest but significant: It represents the agreement of more than 190 countries to bring firm national commitments for action on climate change to next year's meeting in Paris.

As an observer of the negotiations who is active on climate issues, I was relieved to see the agreement and grateful for the leadership of Minister Pulgar-Vidal, as well as the efforts of thousands of people who worked through the painstaking process of achieving unanimous agreement of 191 countries and the European Union. While this document alone does not, of course, set us on an all-clear climate path, the name of the document -- a "Call to Action" --encapsulates well its value. This document offers moderate but still visible momentum forward and encourages broad ownership of the responsibility to confront climate change, both of which were nowhere to be found in the aftermath of the same global meeting, five years ago.

In December of 2009, when I was a graduate student studying environmental policy at the London School of Economics, attending for the first time a United Nations climate change conference (commonly called a COP, for Conference of the Parties to the UN Framework Convention on Climate Change), I was deeply interested in the event and the outcome. I'd entered grad school envisioning myself eventually becoming a part of this process, working through the international negotiations to stop climate change.

That year, global hopes were high for that particular meeting, the 15th since the first COP in 1995 in Berlin. The United States looked as though it could finally show leadership on climate change: President Obama had just begun his first term, and a cap-and-trade bill to reduce carbon emissions had been working its way through Congress earlier that year, with bipartisan support. Environmentalist Bill McKibben was stirring up protestors around the country with his "350.org" campaign, drawing popular attention to the scientific consensus around the necessity of reducing the amount of CO2 in the atmosphere. The key message of the 2006 Stern Review, a 700-page report on climate economics that essentially said the costs of not acting on climate change would be higher than the costs of acting on it, seemed finally to be catching hold.

I was one of more than 10,000 people who descended upon Copenhagen that December; many of these participants had very high expectations that this COP would be a milestone in climate change history -- as I did.

It was a milestone, it turned out, but not in the way that we expected. We got no elegantly crafted, unanimously agreed plan that could take the world off its default path toward catastrophic climate change. In fact, we got no plan out of Copenhagen. The U.S. ended up pulling together a kind of unofficial side agreement that recognized the need to stay below a two-degree increase in global temperature, initiated a process through which countries could voluntarily log their own commitments, and pledged a lot of money that has not yet materialized -- not exactly a major breakthrough. In other words, COP15 was an epic fail.

At an impromptu gathering after the holidays, I commiserated with grad school classmates with similarly quashed hopes. A few people threw out ideas about how we could still act on climate change, focusing on local politics or on work with the private sector. Feeling disillusioned with the process of international climate negotiations, I switched the focus of my graduate thesis to community-based climate change adaptation.

I left the COP in 2009 reflecting on the premise behind the negotiations: that any solution on climate change--indeed, the future of our planet--was in the hands of an esoteric, nation state-led process. And such a process was not working, either at COP15 or before, as had been seen in the floundering of the Kyoto Protocol.

But the debacle at Copenhagen forced a reconsideration of that premise, and consideration of the importance of non-state actors who could lead and contribute to the solution. The powers that drive climate change (energy, transportation, and agriculture) are split kaleidoscopically--between not only national governments, but also subnational governments (states, cities), communities, businesses, and industry groups. Perhaps strategies to confront climate change would have to reflect this kaleidoscope structure, as well.

I began to see how solutions on climate change might seed, take root, and flourish independently of a top-down, international agreement. I began to envision my career after graduate school as connected to more nimble, innovative ways to tackle climate change, including adapting to the changes in climate that are now inevitable. I work now at the nonprofit Forest Trends, where I can do exactly that. My particular focus is on creative, new solutions for water resources, the primary way in which we'll feel the effects of climate change.

On a global level, the hard lessons learned from that COP have pushed leaders from all sectors and levels of government to take some responsibility for addressing climate change--while also opening up a space for this kind of leadership. For example, at the time of the next COP, in Cancun in 2010, I was working with an international coalition of local governments working on sustainability, which coordinated a global mayoral declaration of action on climate change.

The Year 2014 Sets a New Tone, and Peru Shines a Light

This year, the tone leading up to the 20th COP in Lima was different from in 2009. The Climate Summit hosted earlier this year by Ban Ki-moon emphasized this spirit of action and leadership across sectors and levels of government. It was complemented by a People's March on climate change that reflected the strongest and broadest public enthusiasm for action on climate change that I can remember since Copenhagen. The U.S. has committed to climate leadership with China, in a historic announcement made just a few weeks before COP20. California's cap-and-trade program has rolled out successfully, and carbon taxes in places like British Columbia and Mexico are demonstrating how tax reform can be green.

And the environmental economics message that has emerged this year--bolstered by real examples, from reducing deforestation in the Brazilian Amazon to making urban transport and energy systems more efficient--is that action on climate change and economic development can, and must, be fully complementary. At a Forest Trends conference that was co-hosted by the Peruvian government and held in Lima ahead of the COP, Carlos Gustavo Cano, co-director of the Bank of the Republic of Colombia, even suggested that capitalism itself was at risk of failure if it could not appropriately account for environmental costs and benefits. During the COP in Lima, at the Global Landscapes Forum, former President of Mexico Felipe Calderon explained, "We do not need to choose between fighting poverty and fighting climate change."

This year also marked the first time that a COP was held in a tropical South American country, where the role of nature is exceptionally important for regulating the global climate and adaptation to the regional effects of the climate crisis. In Peru, almost half of emissions come from deforestation and land use change, and glacier-capped mountains feed downstream populations, so the integrated management of natural resources--across sectors, borders, and levels of government -- is crucial. Highlighting these issues is important globally, too, as about one-quarter of global carbon emissions originate from deforestation, agriculture, and other land uses.

As the COP host -- providing the meeting's backdrop and framing the many side events happening in addition to the official negotiations -- Peru demonstrated to the world the importance and opportunity of taking on the climate crisis through strategies that recognize the value of forests, wetlands, grasslands, and glaciers as "natural infrastructure." Several events during the negotiations recognized the value of a recently passed ecosystem services law in Peru, which provides public approval for projects that compensate land users for being good stewards of productive ecosystems. Peru's water regulator, SUNASS, even got in on the action, hosting their own COP side event highlighting the importance of ecosystems for the country's water resources, especially in the context of climate change.

A Call to Action

Five years ago, my career in this field was just beginning. Navigating my way through the December Copenhagen cold, surrounded by negotiations that seemed to be going nowhere on one side and any number of people in polar bear costumes demanding swift, simplified action on climate change on the other, it was easy to be daunted by what seemed to be an enormous and saddening reflection on what I was already sensing to be the arduous task of finding climate change solutions. But these years later, I see that COP15 forced a necessary shift in perspective--for me, and the world.

I am no longer a graduate student, but I am still learning -- especially about shifting expectations and about facing mountains that appear daunting, one innovative step at a time. And at this year's COP -- a warmer December, this time in Peru -- I was again filled with hope. I am also filled with gratitude, as I listen to President Calderon and others express optimism and determination to tackle one of the most pressing issues of our time. I am grateful that leaders have emerged from many different sectors to take on this responsibility.

Despite setbacks and the temptation to succumb to nihilism, we are moving forward to solutions. The answers won't come in a neat package, handed down by representatives of 191 countries. As I reflect on the evolution of the approach to climate change since Copenhagen and the outcome of the most recent COP in Lima, I fully agree with a statement by President Obama earlier this year: "The most important thing is to guard against cynicism ... There's a lot we can do about [climate change]. It's not going to happen as fast or as smoothly or as elegantly as we like, but, if we are persistent, we will make progress."