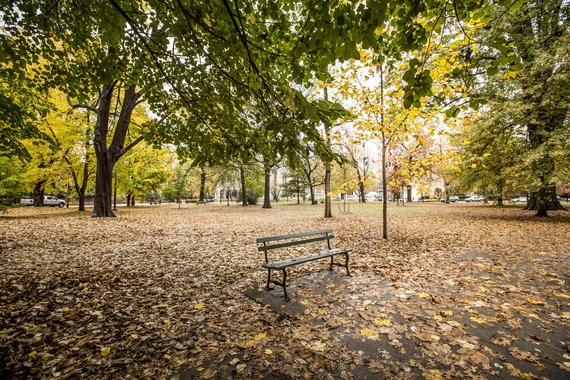 By Mark Tercek and Pascal Mittermaier

Mark Tercek is the president and CEO of the Nature Conservancy and author of Nature's Fortune. Follow Mark on Twitter: @MarkTercek.

At the World Economic Forum in Davos this week, the important topic of urbanization keeps coming up in various discussions. For environmentalist like us, it's a critical issue, too.

As the world's population grows and as our planet increasingly urbanizes, we need to redefine the relationship between cities and nature. It is no longer enough for us to "protect the last great places," as we used to say at our organization, the Nature Conservancy.

Don't get us wrong -- nature needs TNC and the other great environmental organizations to continue championing protection of the lands and water on which all life depends. But if we are going to have a broader impact and if our work is to be relevant in the future, we need to expand our environmental mission to include work in cities.

We need to unleash the power of nature to help make cities more resilient, livable and ultimately flourishing so both nature and people can thrive.

We now need to work closely in partnership with the people and organizations who have been focusing on cities for a long time.

Since our founding more than 60 years ago, TNC has built a strong track record of helping solve major environmental challenges. We have developed world-leading expertise in science-based outcomes, worked hard on inclusive policy work and have often acted as reliable conveners in multi-stakeholder approaches. We have always worked hard to collaborate with others.

We can now bring these same skills to our work with cities.

Nature can help cities solve some major environmental, social and financial challenges. Nature-based solutions can play a major role in providing clean drinking water and cleaner air, and they can help lower pollution impacts from cities.

And, perhaps even more importantly, our work in cities can help connect new, younger and more diverse people with nature to ensure the next generation of environmental stewards and supporters.

Take our work to provide clean water, for example. We are working with more than 40 cities around the world on water funds -- using a small levy on urban water consumption to help preserve the pristine area above a city, thereby ensuring clean, cost-effective drinking water for city residents.

What about the impact of water once it leaves a city? Stormwater -- rain that falls on paved areas, flows into overtaxed sewers and then carries all the pollutants directly into rivers and oceans -- is now the biggest form of water-related pollution coming from cities. Two trillion gallons of untreated water per year flow out of cities in the U.S. alone.

Several TNC pilot projects in cities such as Washington, D.C., Detroit and Bridgeport, Conn., show that deploying natural -- or green -- infrastructure can dramatically reduce the speed and pollution content of stormwater at much more cost-effective levels than traditional manmade -- or gray -- infrastructure like sewers.

Green infrastructure's potential is enormous here -- not to mention the benefits for biodiversity in an urban context.

Nature can also help clean dirty city air. TNC is working in several cities to examine nature's role in removing pollutants from the air. In Louisville, we are working with several partners, including the city and the University of Louisville Medical School, to demonstrate the beneficial role of trees and vegetation on asthma and cardiovascular health.

This first and largest study of its kind will help us understand which kind of trees, deployed in the right context, can strategically improve air quality. The outcomes of this and other studies will no doubt help redefine planting trees and vegetation as a major strategy to combat poor city air.

We are exploring the health and well-being power of nature even further. TNC is working with schools, hospitals and offices to prove the power nature can have on cognitive learning, hospitalization time and increased well-being, productivity and engagement in the workplace.

These impacts can be dramatic, and they're increasingly drawing the attention of researchers. Which school administration, hospital director or corporate CEO wouldn't want to explore this?

Additionally, as many biophilia studies have shown, people who experience the positive impacts of indoor nature become more engaged with and care more about nature in general.

One last, important strategy: The more projects we do in and around cities, the more we can expose urban dwellers -- many of whom are young -- to nature.

Author Richard Louv said we don't just need to preserve nature -- we need to create more of it, particularly in cities, so people can benefit from its healing powers.

And for TNC, it is crucial we engage and enthuse the next generation of nature supporters to ensure that our mission is relevant 60 years from now.

The time is right to unleash the power of nature in cities.