Before he was selected in WWII's first draft for 18-year-olds, Detroit's Lawrence Dupuis didn't know the value of being color-blind. "They would take me up in the aircraft and I could detect where the landscape had been disturbed and camouflage was laid down." 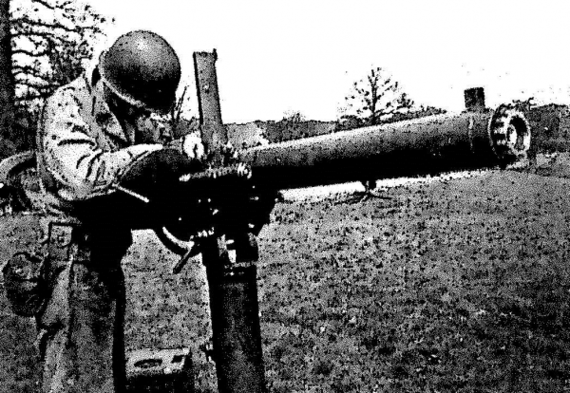 His cartooning skills were even put to use, although someone else would have to color the wall-sized illustration below: "This drawing was painted on the stage of the Great Dunmow Airport Building that was to be used as an all-purpose room by the 8th Air Force who were to take over the field. They sent over a sergeant to check the work which he would color later. I don't remember how I got involved but I do remember spending my nights after supper -- for a month!" 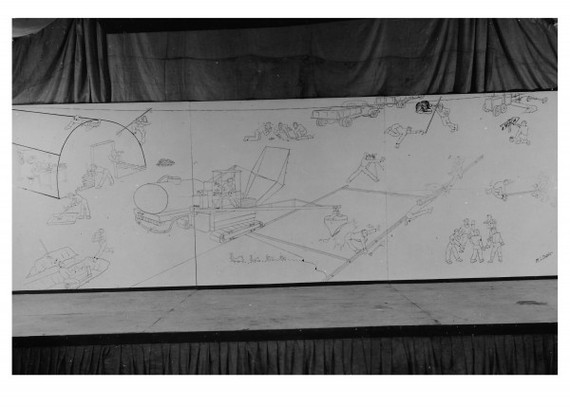 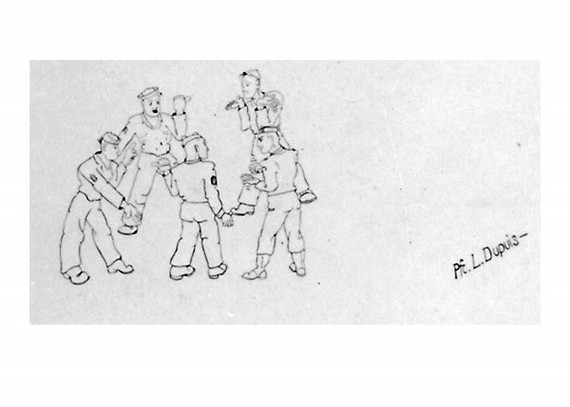 "I got called down to the chief's one day and he informed me that I was to go to London to be a part of a special unit. Turned out to be a color-blind group. We reviewed aerial photos, turned out later to be the coast of Normandy. The assignment lasted almost a month." 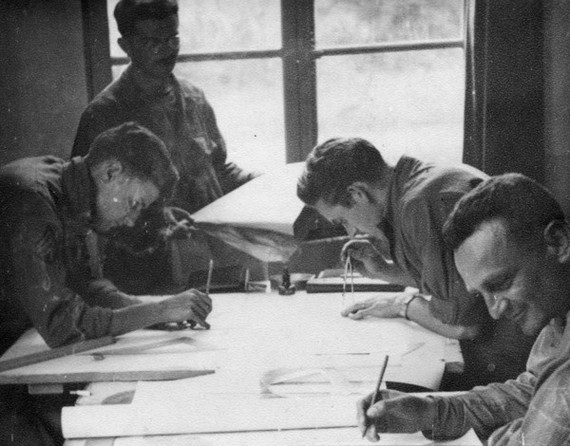 Great Dunmow, England. We were drafting an airfield -- one of the cement landing fields. (Dupuis is third from left.)

Dupuis graduated from Detroit Western High School in 1942 and was drafted the following February after just one semester at Lawrence Technological Institute (housed beside Ford's Model T assembly plant in Highland Park). 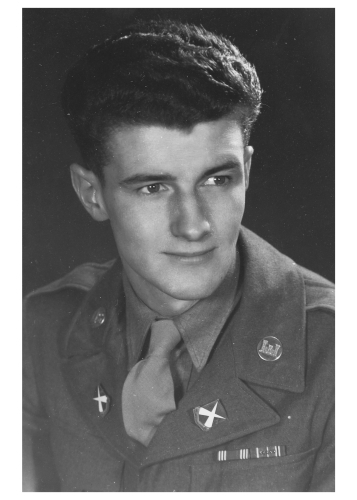 "Over the next eight months, I trained in eight locations -- from Fort Custer, Michigan, twice in Missouri, Virginia, Maine then New Jersey before sailing for Scotland on the Queen Elizabeth. The US was in such a hurry to get troops abroad that we never completed training in any of those stops."

In England, Dupuis was a replacement and assigned to the 818th Engineer Aviation Battalion -- an old army outfit "bugles and all" who had been overseas a year already building concrete airstrips for the 8th Air Force. "The field was bombed frequently so I was trained twice in anti-aircraft schools."

"Then off to Normandy -- Utah Beach." 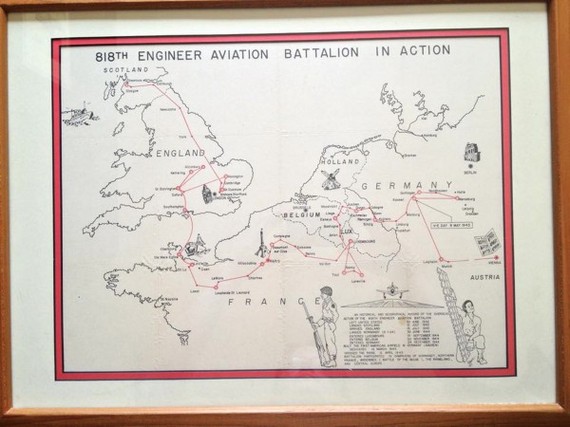 One historian notes, "As an "engineer aviation battalion," Dupuis' unit's job was to support the Army Air Force (the USAF as an independent service didn't exist until after the war), primarily by building airfields as the ground forces advanced, which is borne out by the reference in the bottom right of the map to building the first US airfield in Germany near the end of the European war. These airfields would be for squadrons supporting the ground forces, rather than for squadrons involved with the strategic bombing of the Third Reich."

"From the map, much of the path of the unit's advance after leaving Normandy -- i.e. south-southeast down to Le Mans and the Loire valley, eventually east towards Verdun and Nancy -- suggests it was following in the path of Patton's Third Army (rather than the neighboring US formation, the 1st Army, which was to Patton's immediate north). It eventually goes north towards Bastogne, indicative of participation in the Battle of the Bulge as Patton's forces turned north to help stem the German advance , and then to Liege, and Aachen, indicative of a new mission to support the air units behind the US armies to the north (1st or 9th), rather than Patton's. The unit crosses the Rhine at Remagen, gets almost as far east as Leipzig, in what would be the eventual Russian occupation zone and, ultimately, East Germany, before being pulled back and going to Munich in the south and eventually Vienna. 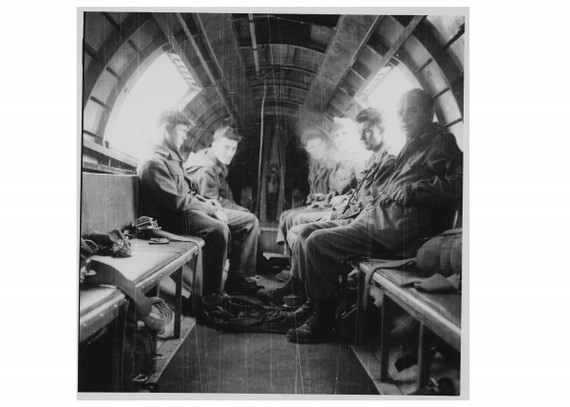 Though a large number left by train for Bangor, Maine to transfer to the glider engineers, when we arrived there were no openings, so we took a train to New Jersey to head to England. We did get a ride in this tow-plane!

The historian adds, "Like the other major participants in the war, the U.S. struggled with its mobilization of manpower for the military vs. that for industry. And there were significant issues even within the military. The Army tended to send its most intelligent recruits to the more technical and specialist disciplines, such as the engineers and the Army Air Force, at the expense of the infantry. As a result, the effectiveness of the US Army in combat suffered, because, among other things, the ability to demonstrate initiative correlates with intelligence. Late in the conflict the War Department had to comb-out personnel from the supporting disciplines to augment the depleted ranks of the infantry."

It was a true honor to share such an amazing chronicle of WWII through the images from Lawrence Dupuis. Below are just a few of the pages of his amazing historical album. Special thanks to his daughter Patty who interviewed her father as they went through these images. 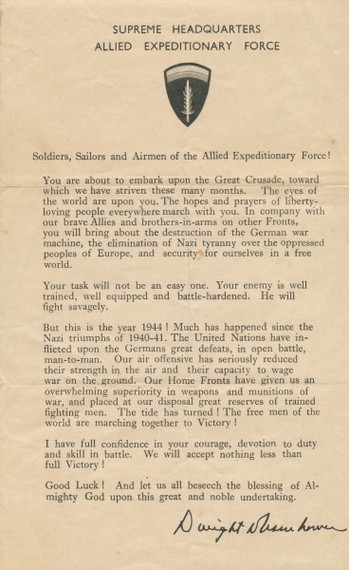 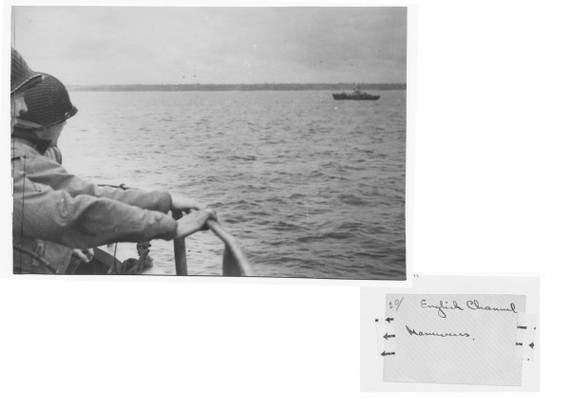 We did two maneuver practice runs prior to Normandy. 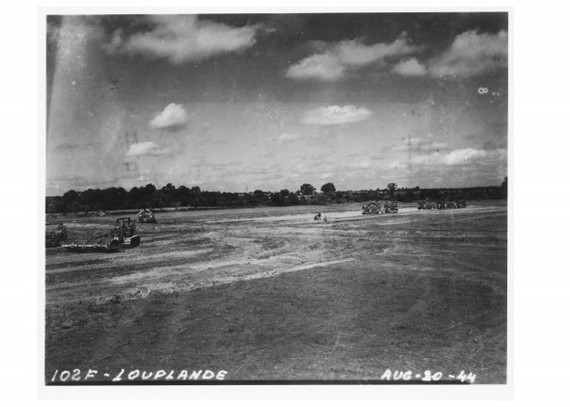 The beginnings of airfields somewhere. We typically had less than a week to get the field up and running. I have great respect for the airmen and the job they did during the war. 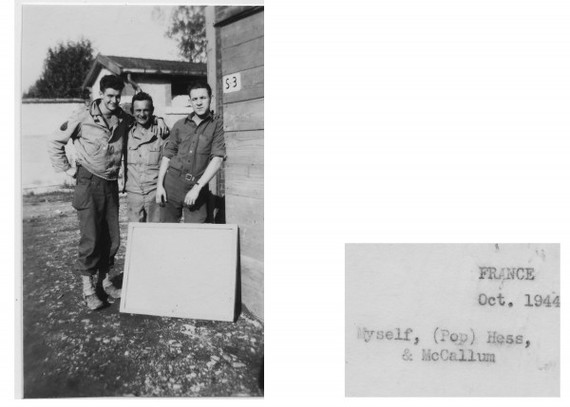 This is how we made blueprints. We had to put that screen in the sun to make a print, so while it was in the sun, we had a few minutes to mess around and relax. 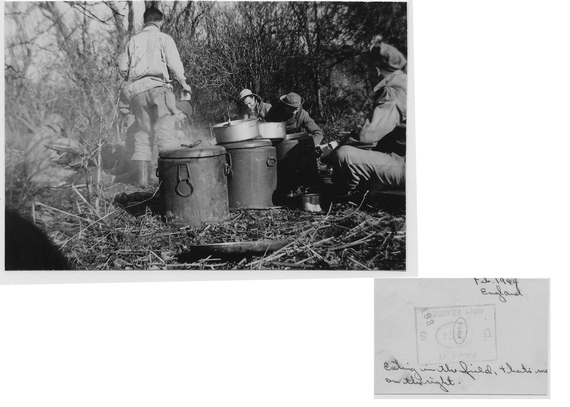 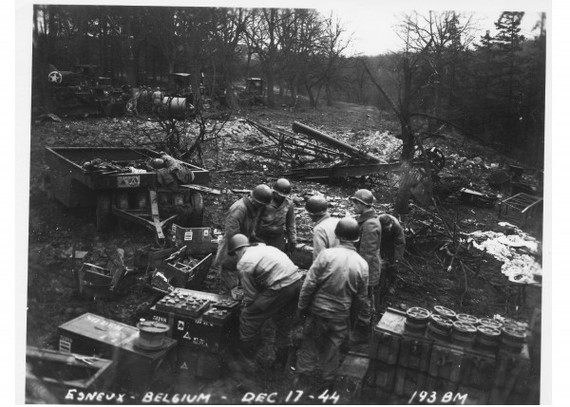 Note the canisters of film in foreground. The press photographer was embedded in my unit; he and I became friends, so that is how I got so many pictures of myself! The photographer would print out an extra copy of anything that he thought I might want. 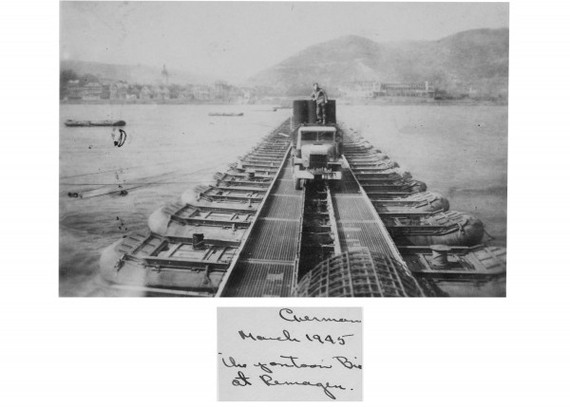 The Ludendorf Bridge, also know as "The Bridge at Remagen" which was captured intact and allowed the Allies to cross the Rhine. Additional pontoons were added to augment the capacity for the heavy load. The Germans eventually collapsed the bridge, killing 19 Army corpsmen. But with so many pontoon bridges up by that point, the loss of the Ludendorff Bridge was negligible. Dupuis is particularly proud when looking at this photo 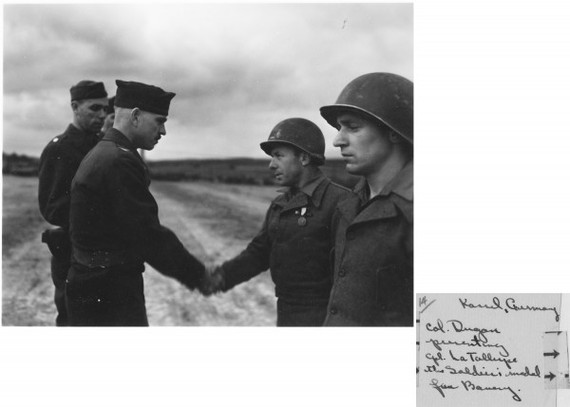 Two men of the 818th receiving ribbons for their action in the Bulge. 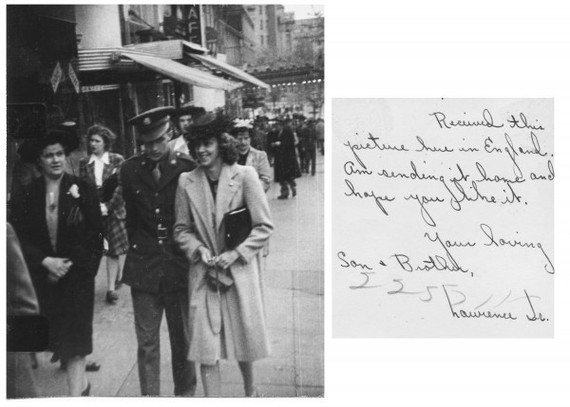 Washington D.C. with my sister and Mom. 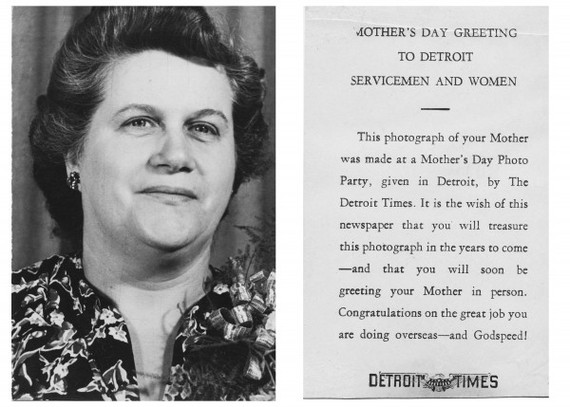 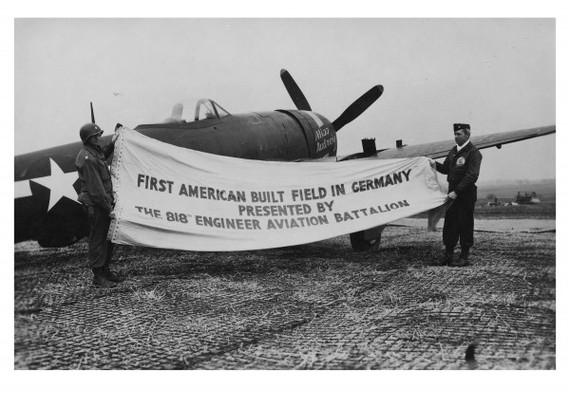 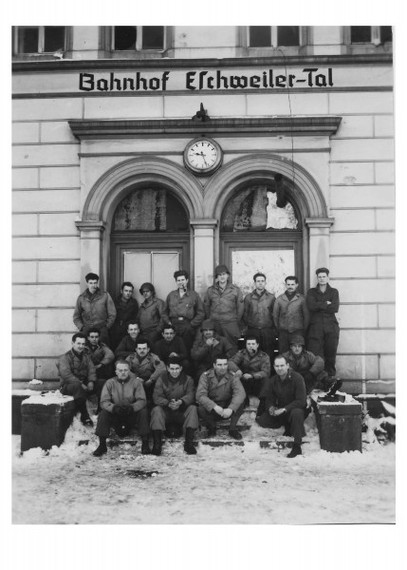 Headquarters for the Engineers' section. 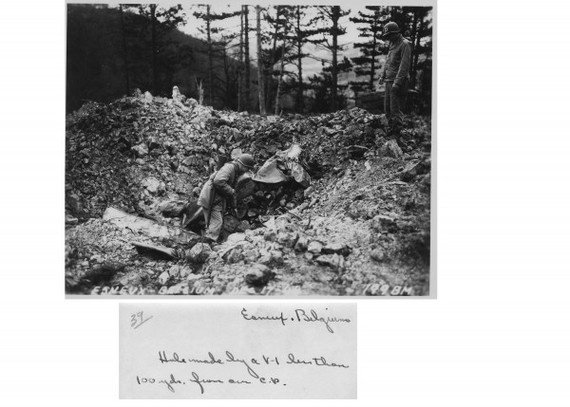 A crater from a V1 rocket that landed 100 yards from us. 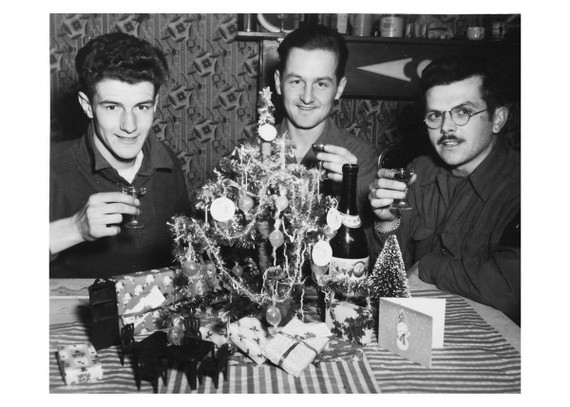 Most likely in England 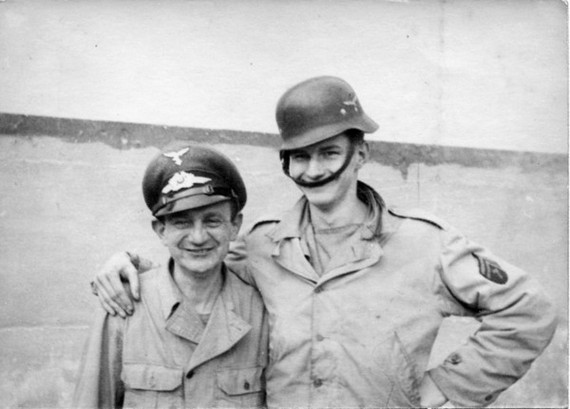 This guy on my right was 42 year old draftee--a great guy! 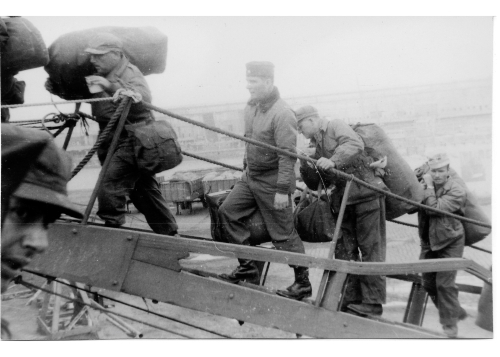 Coming home: The 818th boarding the Costa Rica in Marseille--November, 1945. 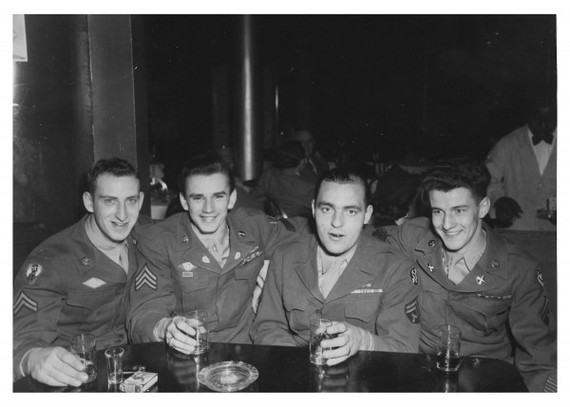 I love this picture--just after the war, when all of his local Detroit buddy's met up at a neighborhood bar, Pete Hengy's (on Vernor near Springwells). From left: Don Scharf, Eugene Cotter (silver star recipient), Cal Hoffman and me, Lawrence Dupuis.

After the war, Dupuis attended Lincoln Chiropractic College in Indianapolis on the GI Bill. He reunited often with his fellow veterans who were recognized for their valor. 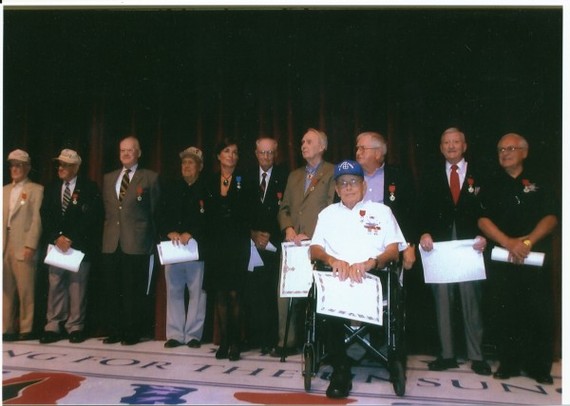 French Legion of Honor presented by Brigitte Dagot of Honorary Consul of France for North and Central Florida. 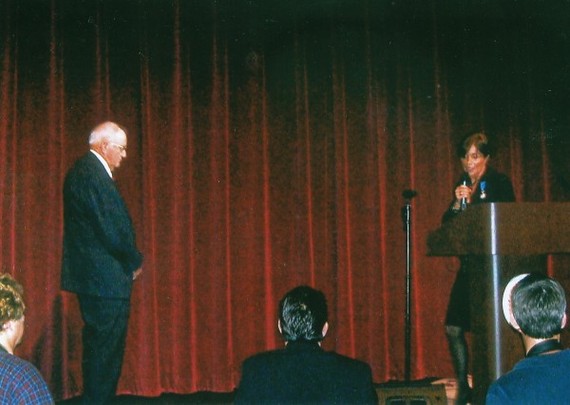 Thank you, Mr. Dupuis, for your service to our country and for sharing these priceless images.