The US social fabric is going through a test whose outcome is anyone's guess. If you look at the history of unrests in the US, it is clear that they are on an upward trend.

It is not that there haven't been contentious times before. The 1960s and the 1970s were very active as far as civil disobedience is concerned. And yet,it seems that there is something more belligerent, more sinister about the riots taking place these days in Baltimore, and only a few months ago in Ferguson, Mo. The pain and frustration expressed in these places, and the coast-to-coast protests after the non-indictment following the death of Eric Garner, should draw attention to the polarization of American society.

The American Dream is founded on self-centeredness: Everyone tries to achieve the most, through one's own efforts, and strives to reach the top of the heap. But at what cost? How many people does one have to step on in order to get to the top? And if someone did get to the top, can we expect that person to have any compassion for others? Our society is built on self-indulgence, so by default, had our leaders been compassionate, they wouldn't be leaders; they'd be among the trampled.

I believe that the patience of people is running out. Without urgent social transformation, the American society might implode and collapse. But for transformation to occur, there has to be general support. In an integral society such as in the US, where all factions are tightly connected and interdependent, if one of the parties disagrees with a proposed process, no initiative will succeed.

To restore social stability, all parties must realize that they will not succeed without everyone's participation. It is unreasonable to think that one faction of the population can be oppressed and exploited indefinitely. Sooner or later, that faction will explode and will take over through violence. It has always been the case, and there is no reason why history should not repeat itself if human nature hasn't changed. And in my view, we're at tail end of the calm before the storm.

In simpler terms, we need to establish between us a very "un-American" concept: mutual guarantee. Every military unit and every sports team knows that unless everyone covers everyone else's backs, the result will be defeat, in combat or on the court. And yet, we idolize the stars, the heroes, people who fought their way to victory all by themselves. Rambo is great for Hollywood, but his way of life won't make people happy. One who nurtures mutual guarantee, who dedicates one's life to bringing people together, that person will make a lot of people happy, and not just for ninety minutes in a theatre, but for the rest of their lives.

The Me! Me! Me! culture caters to our generation's spirit, but the reality of life is that we're living in the We! We! We! era. When you think about it, there is not a single product that we wear, or a single gadget that we use, which does not come from virtually every country in the world. Even our thoughts are influenced by people and things that happen thousands of miles away from us. And if this seems far-fetched, think of the number of recruits that ISIS is drawing from the West, and you will realize that Syria isn't really across the Atlantic; it is far closer to home than we would probably want it to be.

There are ways to solve conflicts. One such way is the Round Table, a method of discussion implemented by the Arvut (mutual guarantee) movement in Israel (the name is not coincidental). The movement has succeeded in bridging Jewish settlers in the West Bank with their Arab neighbors. It brought together rival parties in small towns, bridged between orthodox and secular Jews, and held a Round Table event at the Israeli President's residence. It even held a Round Table event at the Knesset (Israeli Parliament) with representatives from all parties! Clearly, such an event would be much harder to achieve today, but the idea is that when there is a will to bridge gaps, there is a way to achieve it.

I am not suggesting that the solution to all of America's problems is the Round Table. All I'm saying is that everyone, whites, blacks, affluent and needy, Jews, Christians, Muslims, and all denominations and non-denominational individuals, every man, woman and child should know that if not all are satisfied in the land of the free, then no bravery will suffice to build a home. The United States of America can be a land of unlimited possibilities for all, or the land of no possibility for peace. 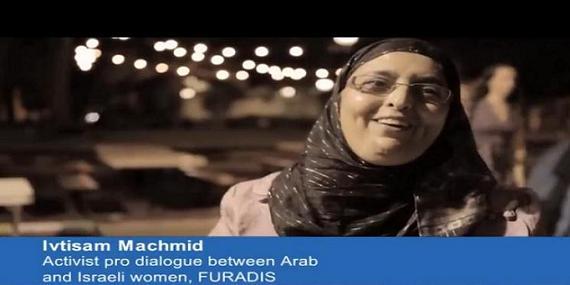 Participant in Round Table in Tel Aviv, 2013

Choosing a new paradigm is tough. The same old same old is much more convenient, but these days it's a luxury. The American people are special. It is a nation of pioneers who feared nothing and conquered new frontiers. Now they face a new one--forging unity among all factions. Like all frontiers, it is replete with mystery and uncertainty, but then, so is every great adventure.