I don't normally use Huffington Post to talk about business but the other day something reminded me of my childhood, which made me think about how I got to where I am now. For those who don't care about life stories, I suggest you turn the page now. For those who have some time to kill, let me tell you a little more about my entrepreneurial journey.

It all started with freeze cups.

If you grew up in a poor neighborhood like I did, then you know all about freeze cups. I would like to say that my sister and I were the inventors, but many would disagree and I don't think the U.S. patent office would even take the time to consider it.

For those of you unfamiliar, a freeze cup is simply Kool-Aid frozen inside a plastic cup. Once the juice is frozen, you flip the concoction over to eat from the smaller end, using the plastic cup to hold it in place.

My sister and I were the freeze cup entrepreneurs of Benton Harbor, a small town in Michigan, located about halfway between Chicago and Detroit. I believe I was about 8 years old at the time and it was good money for someone that young, especially coming from a low income household.

The main part about this story that I like to share is that it made me feel accomplished. I knew that I could make a difference in the world as people were coming to me for a need that I was able to fill. Of course it was just frozen Kool-Aid, but a need nonetheless.

I took many jobs after we moved out of the city. From cooking to farming to even running my own auto detailing business. All of which were hard work and provided little income, just enough to make me know I needed to do something different. This led me to college and an eventual career working for the man. It was under the gun of working for a government agency that made me start thinking about becoming an entrepreneur.

Alas, I found the internet

The internet was one of the weirdest ideas I had ever heard of. I remember being at a flea market in Florida when a vendor was trying to explain to me how it worked. Of course, I was pretty young and wasn't even quite sure how they put the cream inside of Twinkies, so understanding the internet wasn't very easy.

It wasn't until years later when I purchased my first PC for word processing that I became hooked on what is now a life necessity. After a few years of playing around and trying to get to the bottom of the web, I decided to make use of it for e-commerce. I was 22 years old at the time and wanted out of my life of answering to superiors. 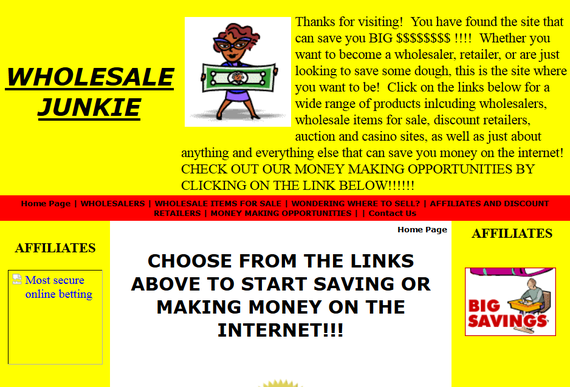 Along came Wholesalejunkie.com, my first website creation which was done with manual html coding and a little help from primitive website building software (WordPress had just been released and wasn't a viable option).

I purchased items from liquidators such as Direct Liquidation and then split the merchandise into smaller allotments. I would make sales on eBay and then send the buyers my website address in case they wanted to buy additional items (also placing flyers in the packages sent to them).

Not knowing anything about SEO, the site quickly flopped as it cost more money to maintain than I was making in sales. I used eBay to clear out the rest of the items I had in stock and moved back to settling in with my government job.

Still playing around with the internet.

It was around 2008 when I ran across a website that allowed me to feel like I did back when I ran my own Wholesalejunkie.com. I had the opportunity to help a community build the website with content and it cost nothing for me to maintain. Great idea and I was quick to sign up.

I am talking, of course, about Wikipedia. I joined the community and began editing like many volunteers do, editing pages on topics I enjoyed or was familiar with. I edited for a few years before stepping aside to again concentrate on my real job (as Wikipedia didn't pay money). I later found a way to get paid to edit Wikipedia, but that's a different story for a different time. Wikipedia editing is what brought me back to the internet and entrepreneurship.

So after a successful career in government and a law degree on my wall, I now run a successful online business (that has nothing to do with the prior two) and I'm happy that I no longer answer to bureaucrats.

Now I'm not saying I miss being part of the corporate world. I often think about it when I'm kicked back enjoying my freeze cup.