The elusive "generation gap" is construed as being widest when one of the two generations is the adolescent. While the gap exists in almost all facets of social and personal domains, never is it more evident than in the field of technology, where one of the generations is a digital native and the other, an immigrant or even an alien, depending upon the stage of the continuum of adulthood.

The use of gadgets itself is markedly influenced by age, as shown in Pew Research Center's Internet & American Life Project that studied how different generations use technology. 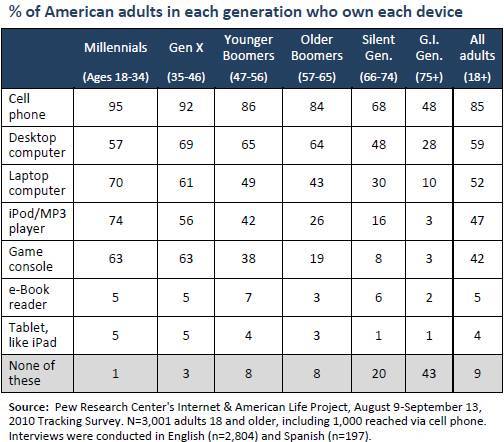 Although cell phones are now the predominant form of interpersonal communication, the way they are used significantly varies between generations. Youngsters use their phones for a variety of activities such as taking photos, texting, going online, instant messaging, emailing, playing games, listening to music, and even recording and watching videos while adults progressively according to their age progression, restrict the use of these devices to fewer and fewer activities. Interestingly, Pew Research found that the one cell phone activity that transcends age is taking photos, with adults just as likely to click photos on the cell phone cameras as the young. However, the type of photos taken differs, with adolescents clicking more selfies that adults.

The Internet seems to be a good leveler of digital use, at least within the US. While fewer than 60% of senior citizens (ages >65) are conversant with and use the Internet in 2014, the percentages are comparable for all other age groups; 92% for teens, 97% for young adults (18-29 years), 94% for the mid-lifers (30-49%) and 88% for older adults (50-64%). How the internet is used also varies among age groups. While teenagers and young adults under age 30 use the Internet to find information, socialize, play, shop and perhaps conduct business, older users visit government websites or seek financial information online. However this gap is narrowing, according to Pew Research, and activities such as emails and search engines being increasingly used by all age groups that are online.

Adolescents use the social media platform as a conversation space and an outlet for self-expression, aimed largely at building new relationships while adults use social media to maintaining existing relationships. Adults have fewer contacts with a third of the adults in social media admitting to having family as their main contact group. Contrast this with the fact that only 10 and 15 percent of adolescents reported to have family in their social media contact list.

The type of material people post on social media sites differs as well. A surprising observation has been that teens post fewer photos on social media sites (like Instagram, for instance) than adults. Teens also post more selfies than adults, which is directly related to the fact that they click more selfies than adults. Teens also appear to post material that depict "mood/emotion" and "follow/like" topics, which are geared towards attracting more followers. Adults however, post under topics that included "arts/photos/design," "locations," "nature" and "social/people."

It is generally believed that young people are risky users of social network sites, because they apparently share more information about themselves than is safe and care little about their privacy. This contention is backed by countless examples of catastrophic outcomes of such exposures. However, the media frenzy around such incidents belies the real situation. Youngsters, especially teens, have been found to make better use of the privacy settings provided by social network sites compared to adults. This is probably because they tend to separate their offline identity from their online identity in order to manage their reputation.

Two other areas where reality defies expectation are online shopping and gaming. Although it is generally believed that teens and millennials drive e-commerce trends, a survey has shown that a large number of middle-aged consumers shop online. More interestingly, seniors are also increasingly adopting mobile commerce - one in four mobile shoppers in the US is over the age of 55.

As for gaming, the following graph shows an unexpected trend where older adults game more than young adults (teens not included). This is probably not shocking in that older adults tend to be retired, and hence have more time to spend on activities such as gaming. 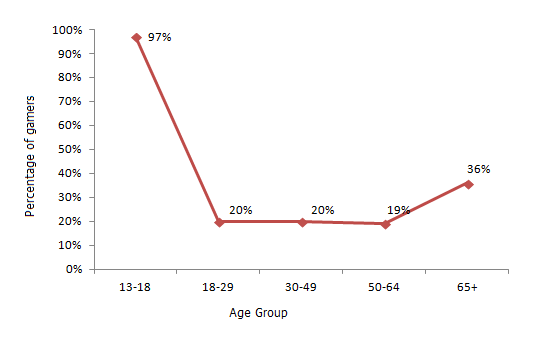 While the relationship between age and technology use is, if not always as expected, not really shocking, there is a growing disparity in the tech industry - the generators of technology. According to a survey by PayScale, the median age of workers at many of the most successful companies in the technology industry hovers well below 35. Older companies had a higher median age, and younger companies had medium age of 30 or younger. This is despite the fact that the people who heralded the IT revolution are now in their forties and beyond. This disparity has been attributed to the change in technology tools and platform over the years. It can be argued that the comfort level that the younger generation has with technology is manifesting itself in them helping find newer ways to improve productivity and efficiency of our lives. What this bodes for the future of human-kind can only be speculated at this point, but it certainly portends to be an unprecedented chapter in the history of civilization.