This last year of sports has focused on two main themes: the G.O.A.T. and social justice. From the Olympics to the death of a boxing icon to the Cleveland Cavaliers' championship there have been frequent discussions about the G.O.A.T. Distinct from the type of goat that plagued the Cubs for over a century, G.O.A.T. stands for the athlete who is the "Greatest Of All Time." Phelps, Bolt, Ali, and James all make compelling arguments. This year has also seen social justice intersect with the world of sport in more pointed and direct ways. This year saw a direct plea by top athletes at the ESPY Awards show, culminating in Colin Kaepernick's (and others') visible protests during the national anthem. As the G.O.A.T., football, and social justice collide, it is worth noting that the groundwork was paved for this long ago by a titan of the sports world, Jim Thorpe.

Without question, Thorpe has an astonishing resume: NFL Hall of Famer, Olympic gold medalist in the decathlon and pentathlon, and Major League Baseball player. He is what Bo Jackson was supposed to become had a tragic leg injury not derailed his career. The King of Sweden summarized Thorpe's status by stating, "You, sir, are the greatest athlete in the world," as he awarded him his Olympic gold medals in 1912. In 1950, the Associated Press named him the greatest athlete of the first half of the 20th century (and also the period's greatest football player). In 2000, an ABC Sports poll named him the greatest athlete of the 20th century.

In addition to this unparalleled career the month of November recalls several events related to Thorpe that were important to the history of civil rights. Several months after his Olympic success, he went on to star in quite possibly the greatest football game ever played. It was a game which would feature a future president, Dwight D. Eisenhower, and would help make Pop Warner famous: the battle between the Carlisle Indians and US Army Academy on November 9, 1912. At that time, Native Americans and the U.S. government were at odds and continued to be so for over a decade after the game was played, so it was an athletic metaphor for the battles being waged daily. Most Native Americans were not given U.S. citizenship until 1924, and derogatory terms like "Redskin" littered sports pages and news to describe them. The Carlisle Indians' shocking 27-6 upset of Army brought pride and respect to an oppressed people and helped to propel Thorpe into the history books.

Decades later, also in the month of November, 89 members of the Indians of all Tribes occupied Alcatraz. Thorpe's daughter, Grace, was one of the leaders of this 19-month occupation that began in 1969 and was instrumental in bringing awareness to their protest by inviting celebrities to the island. Currently on Alcatraz, I have an art exhibition which is focused on several social justice issues and the island's storied history.

One of the central messages is the need for the NFL to rid itself of the offensive word "Redskin." Reflecting on Reverend Martin Luther King, Jr.'s words "they will not be judged by the color of their skin but by the content of their character," it is mind boggling that over 50 years later, we still have the term "Redskins" emblazoned on football uniforms and fields. As my installation is also focused on irrationally long prison sentences, one of the dominant elements of the exhibit are 133 NFL football jerseys spelling out the first 266 digits of the number PI (the jerseys refer to the slang expression "football numbers"). I chose Washington's team to feature the digits of pi related to the occupation (19 and 89) with the word "Redskins" covered with duct tape silencing this offensive term. 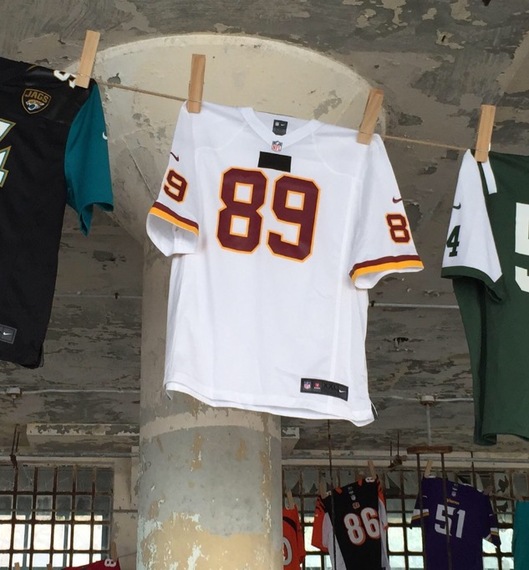 Is it too much to ask the NFL's leadership to show basic dignity and respect to one of its greatest heroes with a name befitting this proud people as opposed to disparaging them?