Call it the pond-scum sustainability solution. Green algae has a promising future as an alternative energy source -- assuming that the right kind of biochemistry is liberally applied.

Algae is everywhere, it grows easily, and it's full of lipids that, when successfully extracted, have the perfect chemical makeup to be transformed into hydrocarbon fuel. The trick, as always, is to do the processing in a cost-effective and cost-efficient way, a goal that has been elusive so far. Enter Nevada-based Algae Systems, which has built a test plant on Alabama's Mobile Bay to not only turn algae into diesel fuel but extract potable water out of sewage and manufacture fertilizer. In fact, this solution is as much about wastewater treatment as it is about alternative fuel production. 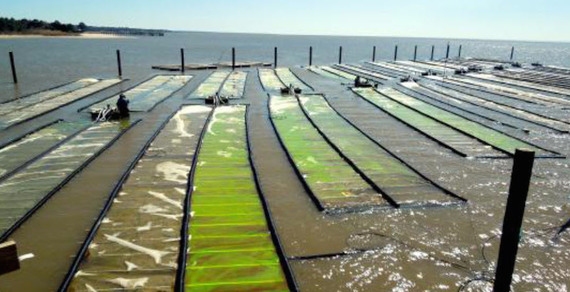 Algae grows inside large floating bags that take advantage of wave action and the ambient water temperature. Within a few days it's ready for harvesting. (Source: Algae Systems)

The company grows indigenous algae in a nursery and scales it up in a greenhouse. Then it's transferred to big floating bioreactor bags offshore, where it consumes CO2 from the atmosphere and nutrients -- including nitrogen and phosphate -- from the disinfected household wastewater in which it is bathing. Wave action does the required mixing, and the water temperature is just right to stimulate the process. After a few days the algae's finished eating, and it's harvested and de-watered.

Next it undergoes painful-sounding "hydrothermal liquefaction," a process that cooks the algae under extreme pressure at 550 degrees Fahrenheit, yielding a liquid not unlike crude oil right out of the well. That liquid is sent to a lab, where hydrogen is added, and the result is a hydrocarbon fuel. The bottom line: carbon-negative wastewater treatment, alternative fuel, and useful byproducts. 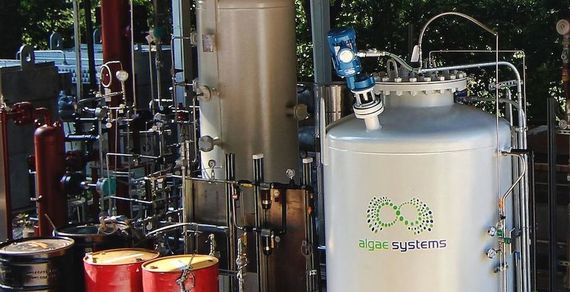 The obvious issue that Algae Systems and its competitors need to address is the cost and impact of the high-powered heating process, but the U.S. Department of Energy has been impressed enough to award a $4-million grant to the company to keep the experiment going, and supporters include not only a Japanese firm that has invested $15 million but former Grateful Dead lyricist and Electronic Frontier Foundation co-founder John Perry Barlow, who brings some serious flower-power cred to the project.

It will likely cost Algae Systems up to $100 million to get its plant up to scale, but its business plan includes charging cities for wastewater treatment, selling the potable water it creates, and selling the potentially valuable renewable fuel credits that the EPA offers to low-carbon biofuel producers. It's about as close as anyone has gotten so far to a self-sustaining and potentially profitable way to turn green slime into green energy.

Interested in energy and the environment? Click here for more XPRIZE Grand Challenges and to vote on future prizes. You can also sign up for our exclusive newsletter!