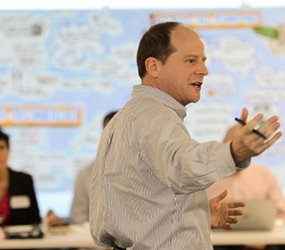 While small businesses are a major source of employment in America and huge contributors to the nation's GDP, when it comes to the election, so far they've been a bit of a non-story.

Small businesses need the right mix of leadership, policy and support to thrive. There are about 28 million small businesses spread across America, each with its own set of agendas and priorities, so it is almost impossible to lump them all into the same bucket. None-the-less it's a critical voting bloc for any presidential candidate.

Jamie: What should small businesses be looking for in a candidate?

Gene: That's an impossible question to answer. There's between 20 and 30 million small business owners in America, they're all from different regions, backgrounds and have their own agendas. If you're in the gun industry, you're going to support a candidate that's backing your industry. You have to ask the questions, what's in the best interest of your business?

Jamie: How do small business owners figure out what their priorities are?

Gene: There's a micro way and a macro way to look at it. The micro way is to look at the candidates who support those issues which affect your business or your region.

On a macro level, a lot of business owners will look at presidential candidates to see what their views are of the economy in general. Particularly around issues like national debt and what's going to be done about that. They know that there are large, macroeconomic issues which will affect everyone in years to come if nothing is done about it.

Right now, our national debt is approximately $18 trillion and our Gross Domestic Product is about $17 trillion so for the first time in history, we've actually surpassed our GDP with debt. We all know that can't be sustained and something has to be done to reduce that debt. It has a long-range impact on this country.

The only way to do that is to raise revenue through taxes or cut costs. All of that stuff disrupts the market and can be a killer for industries and cash flow.

Jamie: What do you see as the big issues for small business which will be discussed over the course of this election?

Gene: Small business, right now, isn't a big political issue for the presidential candidates because, for the most part, they seem to be doing ok.

There are a whole bunch of issues which are affecting small business owners and they're part of the campaign.

If there is a repeal, it's going to be expensive and disruptive for businesses who have plans for healthcare.

The other issue is some of the recent executive orders that the President has issued the Department of Labor and the National Labor Relations Board. There have been new orders on raising overtime pay across the country, there's a push to increase the minimum wage, there are new orders to increase time off. None of these have become law yet but they're all moving in that direction. Some businesses support these, and some do not. They all have a significant impact on small businesses as they can add a lot of cost.

We went through some significant tax increases over the last few years, a lot of them to fund the Affordable Care Act. There were increases to medicare taxes, increases to the top tax bracket and capital gains as well.

America has been pretty stable when it comes to tax increases and the good news is, there seems to be a lot of agreement in Washington right now about having some type of large tax reform in America to simplify the tax code and to make some deductions, like the cost of equipment, happen right away instead of depreciating it. There's also discussion happening around making things like credits for research and development permanent instead of having to renew it every year.

But none of that's really going to happen until the next President comes into office. Democrats want to raise the capital gains tax again, the Republicans don't, but they do want to lower individual tax rates.

They all agree on simplifying the tax code and getting rid of certain tax loopholes.

Jamie: Despite being the largest job creators in America, the disjointed nature of small businesses means they don't have a combined voice, how much influence and power do they actually have as a voting block?

Gene: As a voting block all together, not much because there isn't one group that represents all small business. Their influence comes through their industry groups. When you ask small business owners what they do, they don't necessarily say "I'm a small business owner" they say "I'm a lawyer" or "I'm an architect" or "I own a gas station or a pizza shop". They associate themselves with the industry that they're a part of.

If you want more say with what happens in Washington, you should get involved with your industry group.

Jamie: What do you see as the biggest challenges coming up to the election for small businesses and the American economy?

Gene: The good news is there is less uncertainty than there ever was. Barring any terrorist attack or any national issues, there's less uncertainty. You've got a lean back president and you've got a congress which is pretty much gridlocked so not a lot's going to happen in the next year, year-and-a-half.

As far as challenges for a business owner, it's about getting your house in order. Making sure you're doing everything you can to keep your costs under control. You've got a year to make sure everything is running as well as it possibly could because the next election is going to have a serious impact on the economy. You've got a brand new President coming in, who may or may not have support of congress, and will want to do some new things, like all presidents do in their first term. All of these things could very well affect your business and affect the economy.

You want to make sure that you're in the best position possible financially to navigate your way and absorb any impact on your business or your industry which might come, depending on who's in office in Washington.

We're in a very low growth environment right now so you need to make sure you're operating as efficiently as possible.

Jamie: Breaking it down, let's talk about the front-running candidates and their policy stances which support small businesses.

Gene: At this stage, anything can happen.

On the Democrats' side, there are three main candidates who are running.

Hillary Clinton, Bernie Sanders and Martin O'Malley all do share some principles. They're supporters of the Affordable Care Act, they're supporters of worker's rights, they do support national increases in the national wage. Sanders is even more further to the left than Clinton, he calls himself a socialist.

Hillary Clinton supports national legislation for paid time off and an increase to overtime pay. She also wants to restrict what she calls some of the "abuses" of corporate America, including companies pushing money overseas to avoid paying taxes. But Clinton is a little bit more moderate than President Obama, she's not anti-business by any means but she does support the worker.

On the Republican side you've got Donald Trump. Everyone laughs about Trump but he's leading in the polls. Whether or not he'll be the nominee, that remains to be seen. He's got a business background and there are a lot of concerns with him about how he would negotiate. He's known to be a deal maker. He's a pro-business guy to have in the White House. But he's also supported raising taxes on the rich to pay down deficits, he's not an anti-tax guy. He hasn't come up with any specific policies on tax reform or deficit reduction, yet. He's running on his personality right now.

At the other end of the spectrum we've got Jeb Bush. Bush is more pragmatic, he's an experienced governor, he comes from a family of ex-Presidents and governors as well, so he's got all that baggage of the Bush legacy. He's introduced a very detailed tax plan where he wants to lower both individual and corporate tax rates. He wants to eliminate certain deductions. But he's very pragmatic, he favors a decrease in the capital gains tax rates. He's more moderate when it comes to employee rights and raising national minimum wages compared to Hillary Clinton. He's a typical conservative Republican. Not super right of centre but conservative when it comes to economics. More pro-business than say, Clinton.

It's tough to talk about some of the candidates while it's still so early on. We're really not going to know for another six months or so until we really have a clear picture of who's going to be left.

It's an interesting period that the country is in right now. It's interesting that small business is a bit of a non-story when all these policies affect them. But then, no news can be good news.

Absorb and watch but don't make any decisions yet, gather your information, we've got a long way to go.