The lingering consequences of nuclear testing

Just a few weeks after the 70th anniversary of the nuclear bombs over Hiroshima and Nagasaki, August 29th marks the International Day against Nuclear Testing.

Well over 2,000 nuclear detonations have been conducted around the world since 1945, each one leaving a deadly legacy for humans and the environment.

Trinity from Orbital Mechanics on Vimeo.

Nuclear tests have been carried out in more than 60 locations around the globe. The targets have often been the lands of indigenous peoples, their remoteness, both geographically and politically, determining their selection for destruction. While local populations were forcibly removed from their homes in the name national security, precious little was done to guard against the exposure of "downwind" settlements, who were exposed to an unacceptable health risk from the nuclear fallout.

With the exception of North Korea, nuclear weapon states have ceased the testing of nuclear weapons. However, these states still collectively hold nearly 16,000 nuclear warheads in their stockpiles today. Many of these weapons of mass destruction are ready to be launched in minutes. Whatever the nuclear weapon states learned from the tests, the overriding lesson for us must be: the continued possession of nuclear weapons exposes the entire world to an unacceptable risk of a humanitarian catastrophe.

The nature of nuclear weapons

Nuclear weapons are weapons intended to destroy cities. These are weapons that are incapable of distinguishing between civilian and a military targets. As evident in Hiroshima, Nagasaki, and all the various nuclear test sites around the world, the effects of a nuclear detonation remain devastating for decades and can harm unborn generations.

Nuclear weapons fundamentally violate the principles of international humanitarian law. They are morally intolerable and illegitimate instruments of terror, and as the International Committee of the Red Cross stated, "[T]heir destructive power is unrivalled, their potential impact catastrophic, and yet they remain the one weapon of mass destruction not yet banned."

We have banned chemical weapons, biological weapons, landmines and cluster munitions because of the unacceptable humanitarian harm they cause. Yet, the biggest - most destructive weapons of them all, remains legal for some.

A new focus on the humanitarian effects of nuclear weapons has emerged in the past few years and civil society is leading a new mobilization effort for a treaty banning nuclear weapons. 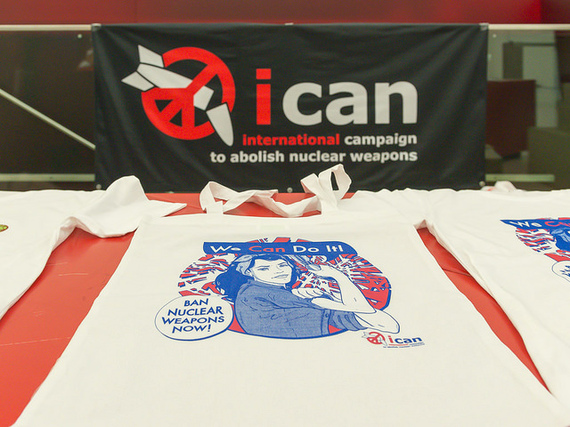 Through three fact-based conferences on this topic in Norway, Mexico, and Austria, evidence of the catastrophic humanitarian impact has been presented. The uncontested conclusions of these conferences highlighted that any detonation of nuclear weapons, either by accident or design, would be a wide-scale humanitarian emergency, to which no meaningful response could be provided.

The conference in Vienna ended with a conclusion that despite non-proliferation treaties and tools, a ban on nuclear testing, and several nuclear weapon free zones, there is no comprehensive legal norm universally prohibiting possession, transfer, production and use of nuclear weapons." A "legal gap" for nuclear weapons exists and must be filled with urgency.

Leading the charge, the Austrian government issued a "pledge" to fill this legal gap for the prohibition and elimination of nuclear weapons and invited other governments to join the commitment. Since the Vienna conference, states have been associating themselves with this Humanitarian Pledge, and as of today, 114 states have declared themselves ready to move forward.

The International Campaign to Abolish Nuclear Weapons believes the Humanitarian Pledge should be used as a basis to launch negotiations for a new international treaty prohibiting nuclear weapons.

On the International Day Against Nuclear Tests, we must remember the unspeakable suffering that nuclear weapons have caused all over the world and call on our governments to start negotiations for a treaty banning nuclear weapons.