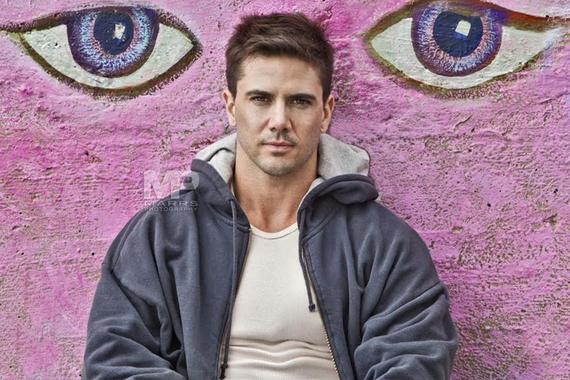 I had been struggling with heroin addiction for nine years and tried everything to get clean. I was barely keeping a job and frequently going to twelve-step meetings, but I could not stop using heroin because every time I did, I would end up with terrible physical withdrawal. Occasionally I would make it through the withdrawal period, forgetting how horrible it was only to use heroin again, believing this time I could handle it and do it right without becoming addicted. This mindset is common among opiate addicts, and it kept me locked in a repetitive nine-year cycle of addiction. I didn't want to die from addiction and needed to make a drastic decision. Drugs and alcohol had destroyed everything in my life; I ended up homeless and moved from rehabs to mental institutions, and I quit a very promising future in the sport of gymnastics at the age of eighteen. My biggest regret in life had been giving back my gift of acrobatics so I could use more drugs --gymnastics was getting in the way of getting high. In my mind, I believed I was a failure, and this belief kept me running back to the euphoric effects of drugs and alcohol to forget the dreams I had abandoned.

When I was twenty-seven years old, I worked as a clerk for The New York Times, and the company sent me to a rehab. While at the facility, a counselor said if I got clean I could potentially go back to the sport of gymnastics, as she knew how much I loved it and thought it would reignite a passion for life that burned out from addiction. She believed if I found something in life to love again, I would stay clean for it. But how could I get back in shape after shooting heroin for nine years? After that session in rehab, I went up to my room and started doing handstands and pushups. I was ridiculously out of shape but slightly inspired. I returned to work at the paper after rehab but relapsed ninety days later. I was mortified and embarrassed because my job had given me a chance to get my life together. I kept training to get back in shape because I wanted to go back to a normal, fulfilling life, but I kept sliding back with frequent relapses. I was desperate to change and heard from other addicts that there was something called a naltrexone implant that would prevent me from having these relapses.

At this time, the implant procedure was not FDA approved, but I found a doctor in New Jersey who would perform the procedure. The doctor told me I had to be fourteen days free of opiates because the interaction between the medication and opiates would cause instant withdrawal. So I worked hard to get fourteen days clean and was ready for the implant. The doctor made a small incision on my left tricep and inserted a capsule containing the long acting opiate antagonist naltrexone, which slowly released the medication. With this implant I would be safe from heroin for three months, and I went back to get another one before it wore off because I still didn't trust myself.

Subsequently, the naltrexone procedure became unnecessary because a monthly injection that goes by the brand name of Vivitrol became available, which does the same thing in blocking the euphoria and high from heroin. The medication works because, like most addicts, I tried to get high and absolutely nothing happened. This was a bittersweet moment.

I can't even begin to describe what it is like for an addict to be physically blocked from the drugs he or she is addicted to. For five months, I felt a freedom that I hadn't felt since I was a child--knowing that even if I tried to use it wouldn't work. For someone who had been destroyed by addiction for countless years, this was an absolute miracle and changed my life. During those five months of not being able to use, I was able to get back in shape and start training as a contortionist. I was flexible--thanks to my acrobatic background--but contortion was extreme stretching. In the same way body builders tear muscle fibers to get bigger muscles, I tore muscle fibers by stretching them to make them longer. Instead of my usual lunch break of heroin, I stacked boxes of copier paper in the copy room at The New York Times and stretched like a madman on my lunch break, determined to become something else than the self-made junkie I had become. I worked out like an addict and tried to turn all my negative behaviors into positive ones; instead of obsessing about heroin, I obsessed about training; instead of destroying my body with heroin, I destroyed it with exercise.

Five months later my hard work paid off, and I booked my first Broadway show with the legendary Twyla Tharp called The Times They Are A-Changin' with music by Bob Dylan. It was strange to actually meet Bob Dylan as a newly sober man because I had listened to his music extensively high and out of my mind. Addiction is said to be a three-fold disease: physical, mental, and spiritual. The naltrexone took care of the physical aspect, which allowed me the safety to begin to work on the other parts, changing the entire course of my life.

I continued on my path of recovery and worked harder than I ever had before, which allowed me to perform as an acrobat in a production of La Damnation de Faust at The Metropolitan Opera House, directed by Robert Lepage. Mr. Lepage inspired me with his genius direction and kindness, and, in turn, my story inspired him while he wrote a Cirque du Soleil show called Totem. He asked me if I would like to be one of the main characters in Totem, a character called Crystal Man who embodied spiritual and evolutionary change. My character in the Cirque du Soleil show represented my new life.

I toured with Cirque du Soleil for three years; while touring with the show, I wrote my memoir called Acrobaddict, which chronicled my acrobatic and addicted experience in an attempt to help those who are suffering from addiction. Publisher Weekly stated, "A more powerful anti-drug missive would be tough to find," and I am honored and blessed to be able to reach others who are battling with their own demons.

I had eight years of sobriety on March 25, 2015, and continue to credit this to the aid of the medication along with a spiritual foundation. I am not an advocate or representative for the pharmaceutical company and wanted to share my own experience as it could help others who are in a similar problem of endless relapses.

Life wasn't all roses, consisting of several ups and downs, but I did remain sober through it. During these tough and triggering times, I had to do the work and learn how to cope with powerful emotions without using my old, negative coping behaviors. In hindsight, naltrexone gave me an opportunity to show up for myself in ways that weren't possible while using. It essentially helped me get over the difficult physiological hurdle associated with opiate addiction and allowed me to deal with my substance abuse. I'm never too far away from the person I used to be, and I don't take my recovery for granted. I know I could lose it at any time, so I try to help others seek their own path to getting clean because, for some strange reason, this kind of service seems to quiet the demons that used to circle my head.