This is the fourth installment in a series of posts on mosques as seen through the eyes of some of the great novelists, poets, and journalists of the last three centuries. See the third installment.

Having a vast ocean between them, American writers of the 18th and 19th centuries couldn't easily share in their European cousins' fashionable romance with North Africa and the Levant. Even when Americans began to travel to Muslim lands, from the start they displayed a more diverse response to Islam and its mosques, which over the course of a century graduated from the crude to the reverent.

Should scholars wish to settle the debate over whether the author of The Adventures of Hukleberry Finn had racist inclinations, they need look no further than Mark Twain's travel journal of 1869. For Innocents Abroad is the record of a man clearly more enamored with the donkeys of Egypt than with Muslims in general. It's a prejudice that disinclines Twain from the great mosques he encounters in Turkey, Palestine, and Egypt.

I do not think much of the Mosque of St. Sophia. [See Slideshow.] It is the rustiest old barn in heathendom... They made me take off my boots and walk into the place in my stocking-feet. I caught cold, and got myself so stuck up with a complication of gums, slime and general corruption... Its immense dome is said to be more wonderful than St. Peter's, but its dirt is much more wonderful than its dome, though they never mention it. The inside of the dome is figured all over with a monstrous inscription in Turkish characters, wrought in gold mosaic, that looks as glaring as a circus bill. The people who go into ecstasies over St. Sophia must surely get them out of the guide-book... Or else they are those old connoisseurs from the wilds of New Jersey who laboriously learn the difference between a fresco and a fire-plug and from that day forward feel privileged to void their critical bathos on painting, sculpture and architecture forever more.

On Jerusalem's Dome of the Rock, Twain is characteristically pithy:

I need not speak of the wonderful beauty and the exquisite grace and symmetry that have made this Mosque so celebrated -- because I did not see them. One can not see such things at an instant glance -- one frequently only finds out how really beautiful a really beautiful woman is after considerable acquaintance with her; and the rule applies to Niagara Falls, to majestic mountains and to mosques -- especially to mosques.

Yet even Twain defers wit to humanity when he distinguishes himself from his company of Christian pilgrims hailing from New England, the American South, and the Mississippi Valley -- though it's difficult to discern if his final pronouncement is ironic or consensual.

In Nain, where Christ raised the widow's son to life... A little mosque stands upon the spot which tradition says was occupied by the widow's dwelling. Two or three aged Arabs sat about its door. We entered, and the pilgrims broke specimens from the foundation walls, though they had to touch, and even step, upon the "praying carpets" to do it. It was almost the same as breaking pieces from the hearts of those old Arabs. To step rudely upon the sacred praying mats, with booted feet -- a thing not done by any Arab -- was to inflict pain upon men who had not offended us in any way. Suppose a party of armed foreigners were to enter a village church in America and break ornaments from the altar railings for curiosities, and climb up and walk upon the Bible and the pulpit cushions? However, the cases are different. One is the profanation of a temple of our faith -- the other only the profanation of a pagan one.

The response to mosques gradually refines as Americans grow increasingly cosmopolitan. In Morocco, Edith Wharton's 1917 memoir of her travels to Rabat, Salé, Fez, and Meknes, while steeped in aesthetics lost to Twain, also betrays a mind altogether more regimented for exporting the American enthusiasm for Manifest Destiny -- the belief in the taking of territory that "lay waiting" for colonization by those "most capable" of seeing its unlimited potential. Upon her arrival in Tangier, Wharton notes satisfactorily:

Three years ago Christians were being massacred in the streets of Salé... Now, thanks to one of the greatest of colonial administrators, the country, at least in the French zone, is as safe and open as the opposite shore of Spain... Until a year or two ago, the precincts around Moulay Idriss and El Kairouiyin were horm, that is, cut off from the unbeliever. Heavy beams of wood barred the end of each souk, shutting off the sanctuaries, and the Christian could only conjecture what lay beyond. Now he knows in part; for, though the beams have not been lowered, all comers may pass under them to the lanes about the mosques, and even pause a moment in their open doorways. Farther one may not go, for the shrines of Morocco are still closed to unbelievers; but whoever knows... or has stood under the arches of the Great Mosque of Kairouan [see Slideshow], can reconstruct something of the hidden beauties of western Africa.

Although Wharton can catch sight of only the ruins of mosques, or the exteriors of those in use, her commentary assumes an authority of discrimination. Her judgments on the surface ring out admiring tones, yet absent any description of the culture and the people who produced and inhabit the mosques and madrasas (Muslim colleges and student lodgings) of which she writes, her commentary assumes the formal yet discreetly Eurocentric language of early 20th-century modernism that represses local values and beliefs in favor of abstract qualities. In Marrakech she writes:

It is difficult, in describing the architecture of Morocco, to avoid producing an impression of monotony. The ground plan of mosques and medrasas is always practically the same, and the same elements, few in number and endlessly repeated, make up the materials and the form of the ornament. The effect upon the eye is not monotonous, for a patient art has infinitely varied the combinations of pattern and the juxtapositions of color; while the depth of undercutting of the stucco, and the treatment of the bronze doors and of the carved cedar corbels, necessarily varies with the periods which produced them.

Nearly forty years later, Paul Bowles counters Wharton's arch formalism in Spider's House, a novel that gauges the disruptive effects that European colonialisms, and their successors the Nationalists, had brought on Moroccans by using the mosque as his symbolic standard of past and present, and that has been made to alienate his lead character, Amar, from his father.

Amar was astonished. He had taken it for granted that since the arrival of the French soldiers many years ago, his father had never gone outside the walls of the Medina... Ever since he could remember, the schedule of his father's life had been the same, had consisted of the five trips a day he made to the mosque, together with the hours he spent in conversation at the shops of friends en route to and from the mosque... When his father went out into the street he had only the mosque, the Koran, the other old men in his mind. It was the immutable world of law, the written word, unchanging beneficence, but it was in some way wrinkled and dried up...

Amar had never formed the habit of going to a mosque and praying. For all but the well-to-do, life had become an anarchic, helter-skelter business, with people leaving their families and going off to other cities to work, or entering the army where they are sure to eat. Since it is far more sinful to pray irregularly than not to pray at all, they had merely abandoned the idea of attempting to live like their elders, and trusted that in His all-embracing wisdom Allah would understand and forgive. But often Amar was not sure; perhaps the French had been sent as a test of the Moslem's faith...

Although Elijah Muhammad and his Nation of Islam introduced the first significant American variation of Islam, it would be his apostate, Malcolm X, who ironically brought Islam to the doorstep of white America. In 1964, when Malcom Little, now calling himself El-Hajj Malik El-Shabazz, embarked on his spiritual journey through the Middle East and West Africa, it was on his pilgrimage (or Hajj) to Al-Masjid al-Haram, the great mosque of Mecca [see Slideshow], that he first encountered throngs of people of all complexions mingling together. "The feeling hit me," he wrote in his autobiography, "that there really wasn't any color problem here. The effect was as though I had just stepped out of a prison."

In the grip of his great epiphany of universal respect and brotherhood Malcom at once voids his belief in black separatism.

"My vocabulary cannot describe the new mosque that was being built around the Kaaba... a huge black stone house in the middle... being circumambulated by thousands upon thousands of praying pilgrims, both sexes, and every size, shape, color, and race in the world... My feeling here in the House of God was numbness... America needs to understand Islam, because this is the one religion that erases the race problem from its society."

Go to Part 5: Colonizing the Mosque 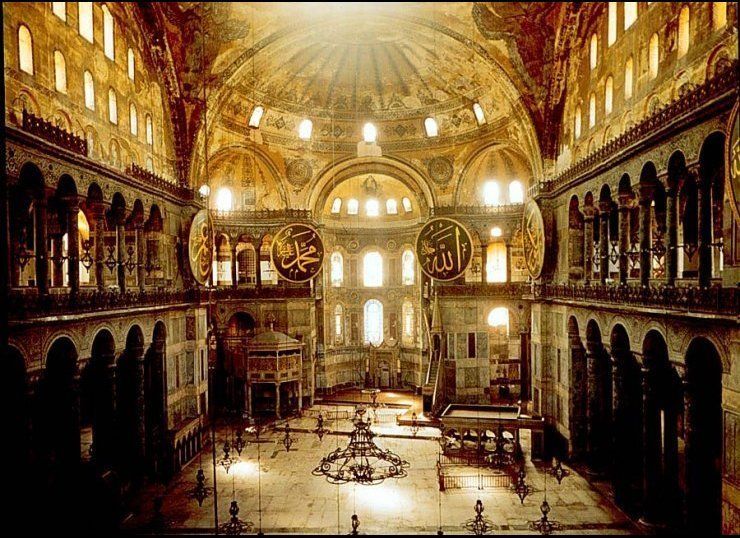 The Great Mosques of Africa, Arabia, and America