The following section is an edited excerpt from the Prologue of Sonia Faruqi's Project Animal Farm: An Accidental Journey into the Secret World of Farming and the Truth About Our Food.

Growing up, I seemed almost earmarked for the financial world, as I was both studious and materialistic. I was a small mass of seriousness--a little librarian--completing my assignments early and happily. But my core longed for more, mentally, materially.

My wallet was wide enough to fill the well of my needs--food, school, shoes--but not the valley of my whims and wishes. I craved more clothes, more books, more boxes--dainty little tins in which to cherish my dainty little things. My mother occasionally said, "You like having things for the sake of having them; you have the joy of possession." I interpreted her comments as compliments: how sophisticated I was, I thought, to be possessed with the joy of possession. 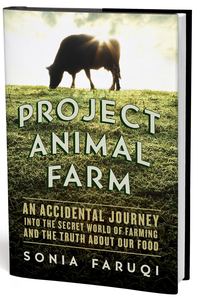 After high school, I attended Dartmouth College, a small, liberal arts university with a campus dotted with trees. Each of its classes was an ingredient you were supposed to select, slice, and stir in the pot of your mind, toward the aim of not merely faring but flourishing. Dartmouth urged that for "bonding" purposes, its students hike together in small groups for five days before the start of school. I'd never hiked before--because I'd never wanted to, and I'd grown up in city apartments--but I decided to participate because everybody else did. Two hours into my outdoor excursion, however, I realized that it was, as I termed it then, "the biggest mistake I've ever made."

My backpack felt like a rock strapped to my back, despite the fact that I'd reluctantly unloaded my makeup and chocolates at the insistence of trip leaders. Worse, there was nothing for me to eat: I ate only meat--shunning fruits and vegetables since childhood--and there was no meat, as it would have spoiled over the course of the trip. I decided to stop eating. An even more pressing issue than food was facilities. There were no toilets; we were supposed to go in the woods like chest-pounding cavemen.

Finally, there was the wildlife: I felt sure a bear would attack me as I slept. One night, I thought I heard an animal panting and salivating right beside my ear. "GIVE ME YOUR FLASHLIGHT!" I yelled at the snoring, sleeping bag-encased form next to me, rattling him awake. I flashed his light everywhere, but there was no bear; there were only my trip members, awake and annoyed. I resolutely avoided the outdoors after that. The rugged life clearly did not suit me.

I graduated from Dartmouth with a major in economics and public policy, and a minor in government. Degree in hand, I joined my classmates in a stampede to Wall Street. Wall Street was the money business, the fast track, a meal ready to eat, without the costly condiment of a graduate degree. I felt pleased and fulfilled when an investment bank offered me employment.

Investment banks had just one requirement of their young employees. They required that as the moon revolves around earth, employees revolve around work. As an investment banker, I did not work to live, I lived to work. I did not eat to live, I ate to work--and I ate at work. All of my meals--breakfast, lunch, and dinner--I consumed in my cubicle, gobbling them up rapidly so that I could continue typing, calculating, working: a machine in the form of a woman.

But I enjoyed it. I liked feeling important. I liked having a paycheck. I liked wearing a suit. I liked racing my fingers across my keyboard and my eyes across my computer screen. Every morning, I awoke like a golden retriever puppy salivating to start the day, unfazed by my seventy-hour work weeks. Wall Street was where I was meant to be, I felt.

Until I was let go.

The American economy began hemorrhaging immediately after I joined, starting with the subprime mortgage sector. The pain spread outward, until the entire financial system convulsed in its throes. Investment banks decreed that it was no longer profitable for them to continue to feed the small fry they'd lured into their nets with baits of bonuses. So they cut the nets. They laid off hundreds of thousands of employees. After two years of living in my cubicle, I was forced to leave it.

I planned to apply for roles at other financial firms, but after a break. I'd worked nonstop on Wall Street, taking not even one sick day, and I thought a break would recharge my battery and help me recommence with renewed intensity.

During my break, I read books. I contemplated life. Since I had plenty of time on my hands, I also decided to volunteer at a farm, imagining that the experience would be an adventure. I contacted a dozen organic and small farms with an enthusiastic offer of free assistance toward the production of their food. I was sure they'd be thrilled and grateful; most of them were cold and uninterested. Only one--an organic dairy farm--accepted my ambiguous offer, and only under one condition: that I volunteer with them not for a week at the most, as I'd hoped, but for two weeks at the least.

I'd devoured the Little House on the Prairie books as a girl, and my mental image of organic farms resembled the pastoral, prairie-like setting of the books. I imagined that my farm stay would be both an education and a vacation, and that, shortly after, I would return to the prosperous world of suits, spreadsheets, and skyscrapers.

I had no idea what I was getting myself into.

Excerpted from Sonia Faruqi's Project Animal Farm: An Accidental Journey into the Secret World of Farming and the Truth About Our Food (July 2015). Sonia's website is www.soniafaruqi.com and she can be found on Twitter @Sonia_Faruqi. An unconventional author with an original approach, Sonia stands primed to become one of the most important voices in food issues today.