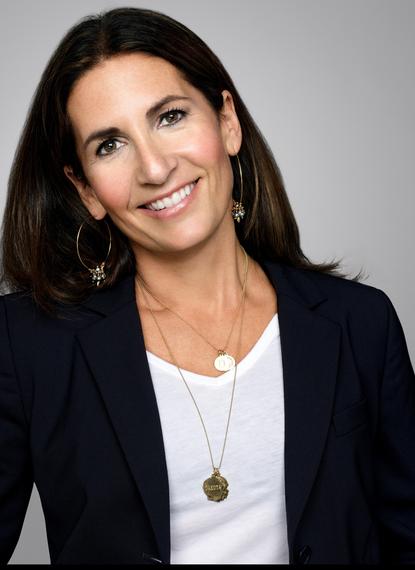 A couple of years ago, then three years of age, my son evaluated me while I was in the midst of my morning routine and what followed was a question that surprisingly felt like a loaded one: "Mom, why are you putting on makeup?"

Who better to address the artistry of appeal (internally and externally) than industry powerhouse and philanthropist, Bobbi Brown? While recently sitting in a restaurant booth in downtown Washington D.C. -- just prior to her scheduled meeting with the First Lady at the White House to discuss education for girls -- she told me with great transparency what she's learned along the way about priorities, losing and grasping confidence, what makes her happy and the power of a lipstick.

Wearing a simple, dark, long-sleeved shirt, her signature black-rimmed glasses (the inspiration behind her recently internationally launched eyewear line), dainty drop pearl earrings and her dark, shiny hair parted perfectly down the middle, she donned barely-there makeup -- light foundation and minimal eyeliner. "I like that you're wearing a bright color," she told me. "My husband hates when I wear dark colors all the time."

Unlike most people in her line of work who have taken residence in New York, Bobbi, her husband and three sons enjoy a quieter pace in New Jersey's suburb of Montclair.

Early on I learned what made me happy. I knew that going to a lot of late night parties and traveling a lot wouldn't make me happy. I never was a networker. I would rather be at home with my family. I can think of five or six times in my life when I've had to choose between something that could have been potentially big in my career, or the people close to me. Would my life really be any different if I did another celebrity's makeup? I always chose friends and family.

And even Bobbi has endured the overt pressure that so many women face today:

There weren't a lot of successful working mothers when I started. People in the fashion industry would say to me, 'Don't tell people you're married, live in New Jersey, or have kids.' When I would leave a shoot at 6 pm people said, 'Where are you going?'

The waitress interjected to take our orders; mine -- a simple salad. "Did you want any protein with that?" I was asked -- not by the waitress, but Bobbi. Health-conscious and a devout yogi, she'll opt for coconut sugar and Whole Foods over dessert, any day, but arranges her daily caloric intake around one indulgence: "I love, love, love tequila on the rocks with a squeeze of lime juice. Sometimes I have one, sometimes two, and once in a while three."

Through the years Bobbi has worked her magic on "every supermodel there is," and at the age of 31 while pregnant with her first child, she was asked to work with the world's then catwalk royalty -- Naomi Campbell, Christy Turlington, Cindy Crawford and Linda Evangelista. "I remember sitting down and feeling, 'ughhhh,' I can't compete with these women. Don't go there. What we just did today, that's not real. They're anomalies, and they're 19!" She invited me to look around. "Do you see anyone that looks like that around here?" "Not one," I confirmed.

I had a meeting in Texas at Neiman Marcus right after I delivered my second child. I was sleep-deprived and not like one of those women that just seemed to bounce right back. I'm sure there was milk or something all over my clothes and I didn't have the confidence going into the meeting. I thought, 'how am I going to do this?' It appears easy on the outside but in the beginning you just don't know how you'll do it. If I didn't have a supportive husband it wouldn't have worked.

Affirming her now easygoing perspective, she added, "I don't get worried anymore if I'm on TV or even speaking with the President."

Bobbi has come a long way since that meeting in Texas. Fast-forward to 2010 when she launched the Pretty Powerful Campaign for Women & Girls, prompted by a makeup session at her SoHo studio where teenage girls and older (40's and 50's) models were shown in a split screen -- one displaying their faces with makeup and the other without. As she noticed a screen in the corner of her eye where some "models of the season" were being retouched, she commanded the team, "Stop. This isn't right and it isn't real. This (directing them to the women with the natural makeup and un-retouched photo) is real."

In recognizing that all women without makeup are pretty and those with the right makeup are pretty powerful, the 'DNA of the brand' was born. "It's (Pretty Powerful for Women & Girls) is about educating women about what 'powerful' really means; that when you're confident and comfortable you can do anything," she explained.

"What makes you feel powerful?" I asked. Without missing a beat she threw out her hand, listing the items one by one on her fingers: "A good night's sleep, meditation, moisturizer, warm water before my coffee, exercise, and relationships. When I'm ok with my husband, kids, parents, sister and best friends, I'm good."

The Pretty Powerful for Women & Girls initiative also partners with other organizations - two of them being Broome Street Academy in SoHo and Girl Rising -- in an effort to empower women through education and workplace readiness.

When I first met Liz Murray -- who went from homelessness to Harvard and is now a board member of Broome Street Academy -- she was homeless and gave me one of those St. Christopher medallions. I didn't know what it was at first because I'm Jewish but it's all she had. I still have it framed in my office. She really moved me.

"I want to tell you something that affected me as a mother and I haven't told anyone this," she said, switching gears,

since you're a mother and we've been on the subject of balancing everything. I was working late one night and my son needed those 'googly-eyes' things for his kindergarten project the next day. At 9PM I was searching every store in the area and couldn't find any. I found myself on the side of the street, head in my hands and crying. I felt like a failure as a mother but realized that I needed to be comfortable asking the other mothers at the school for help. I emailed the parents in my son's class about the googly eyes and I arrived at home to find a thousand pairs on my doorstep. Women need to lean on other women.

As we exited the restaurant Bobbi stopped at the restroom and emerged two minutes later, an even more vibrant version of herself -- naturally flushed pink, youthful cheeks, more prominent eyes and lightly glossed lips. She personified her brand; one that stands for augmenting a woman's existing beauty rather than camouflaging or transforming it.

"I never had a big plan about what to do. I made a lipstick over twenty years ago and I don't now how this all happened. There's no brilliance and no plan. You just do what makes sense," she said while sounding astonished herself, at what she created. "Don't replicate what others are doing. Think of your own ideas."