October 11, 2016, marked the 132nd birthday of one of America's most revolutionary first ladies, my personal hero, and the woman behind our brand's namesake, Eleanor Roosevelt. While her father nicknamed her Little Nell, we felt the woman who defied the traditional role of first lady deserved a more badass title, so we call her Rebel Nell. And what a rebel she was.

Not satisfied to merely host White House parties and entertain foreign dignitaries as the First Ladies of the past, Eleanor Roosevelt became an outspoken activist for women's rights and social justice, two defining pillars that propel Rebel Nell forward. When her husband launched the New Deal, she traveled across the nation, speaking to American citizens to see where the president's policies were succeeding and where they were falling short.

When the New Deal took her to Birmingham, Alabama for the Southern Conference for Human Welfare, she boldly defied Alabama's segregation laws by choosing to sit in the space between white and black seating areas. During World War II, she left the White House and traveled to Europe and Asia to offer medical aid and support to American troops. And, at a time when news publications refused to take female journalists seriously, she held women's only press conferences that would force news outlets to hire women.

A three-time nominee for the Nobel Peace Prize, one of the writers of the Universal Declaration of Human Rights, and the first person to ever bring the United Nations delegates to their feet in a standing ovation, this Rebel Nell was a standout woman no matter how you look at it, or when.

If Eleanor Roosevelt were still with us today, I think she would be proud of how far we have come, but would also recognize how much more work is still left to do. In her time as First Lady, she was a prominent media figure with her own radio show. Since then, we've made technological advances in radio broadcast, which makes me think Eleanor Roosevelt would likely have her own podcast (recorded in her Val Kill cottage) featuring insights and conversations with other trailblazing women. And the syndicated news column called "My Day" she wrote six days a week for 27 years would earn spots on female empowerment sites like Man Repeller and Lenny Letter.

A woman of the people, she would surely have a dazzling social media presence with strong alliances with other rebellious women like Gloria Steinem, fellow First Lady Michelle Obama, Malala Yousafzai, and socially conscious brands like Rebel Nell, of course! Not likely to be one for selfies, she would post photos of her work with human rights organizations and excerpts from Half the Sky and Travel Magazine.

Her thoughts on Hillary Clinton? Eleanor strikes me as the kind of woman that would be a fan of the pantsuit, but more importantly, she would be proud of the fact that a former First Lady now has the strong possibility of being the first woman to fill the role of President of the United States of America. Even if she were too humble to admit it out loud, I'd like to think she would know that her legacy helped pave the path for female empowerment that made possible HRC's presidential campaign.

One of my favorite Eleanor quotes, "The future belongs to those who believe in the beauty of their dreams," is more than just a beautiful set of words strung together. Her fervor and desire for social change are constant reminders to myself and the Rebel Nell family to continually strive towards more meaningful lives. I am thankful the legacy Eleanor Roosevelt left for us is as true as it is inspiring. This is a gift I am grateful to celebrate and honor with my work, my business and my life. 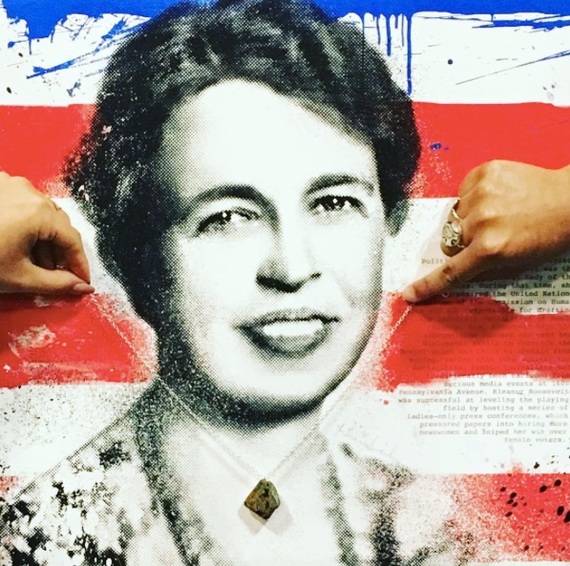 Co-Founder of Rebel Nell. Motivated by the Motor City.