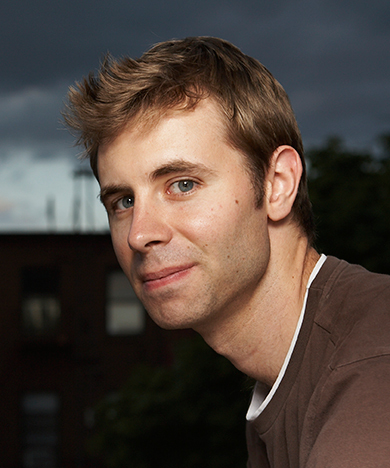 It was a Friday night at Al Mar shortly before the dinner rush when I got to catch up with Giles Copp at the bar. We had originally planned to meet at reBar until we learned that the establishment had suddenly closed earlier that day. Giles and I had had much contact back and forth via email and we've met once before, but for the first time we finally had a chance to chat in a more relaxing environment. I've come to know him over the last year or so and his story is something I admire.

Giles Copp is the cofounder and technical lead for Version Industries. With a team of five, Version Industries has taken on some impressive projects like Louis C.K.'s famous distribution site for his comedy to Daft Punk's website redesign. A self-taught programmer, Giles majored in history of science and worked as a technical consultant in the UK. Giles has a natural way of balancing genuine kindness and brutal honesty. I wanted to share some of our conversation at Al Mar from that night.

BK: What does Version Industries mean?

GC: Version as a name was born from the (version) tracks that you'd find on remix albums. Both myself and my co-founders had similar tastes in music and, back in the days of the CD, many bands like Nine Inch Nails put out whole records of their remixes in which you'd see things like "Heresy (version)." We liked the idea that works of art could become new pieces or versions of themselves, and indeed were as valid as the original track. It's a similar outlook to that now expressed as "everything is a remix." The (version) moniker both reflected that and also lent itself nicely to simple typographic treatment -- our logo is (v).

BK: Version withstood the test of time from the world of Geocities and Angelfire to today. What has surprised you most about the evolution of technology?

GC: The extent, and power, of open source tools is probably the thing which surprises me most. I remember running my first webserver (Mac OS 8 and the server was WebTen, around 1999). It was rather like IIS, which I last used around 2003: a big, heavy expensive program which was odd to configure and a pain to use. A decade and a half later, the situation could scarcely be more different -- you can run a lucrative business in software with almost zero outlay: a laptop, an Internet connection, a desk and perhaps a subscription to Creative Cloud as the icing on the cake. The sheer size of the edifice of open-source software is astonishing. I would call this the most significant driver of the Internet economy and Internet culture: that the barrier to entry has almost been eliminated.

BK: From London to New York, what was one of the hardest things about starting a business in a different country with a different culture?

GC: Actually, banking was the most complex part logistically. American banking is improving, but its differences to Europe is night-and-day. In the UK, your client pays you by just transferring the money from their account to yours: it takes five minutes and it costs nothing. Here, it's a balkanized nightmare of incompatible systems and astonishingly in 2014: writing a piece of paper, putting it in the post, and the recipient then sending it through a 3-day clearing process is often the only way to avoid one or both banks from taking a bite out of it. Hats off to Dwolla, et al for trying to solve those problems.

Culturally, we actually faced fewer obstacles to the work we do here than back home: Americans are less conservative and more into standing out & making a statement than our clients in the UK, and so the work was easier to find.

BK: How did you begin building your network from scratch? What advice would you give to someone looking into breaking into an industry with no contacts?

GC: Our perspective is not typical of many people starting their own companies: We started as engineers and artists and have never been comfortable pushing ourselves on people or "networking." The key to our success has been approaching people we had genuine shared interests with and creating a conversation with them that led to collaborative work. Some of our oldest and best clients are people we approached because we thought we could help them improve the way they presented themselves and, at the same time, give us the chance to create some of our best work. In all cases it took time. You might have a great conversation with a contact, hit their wavelength and get excited, but they might not be ready to work for another 6 months or a year. So we've played the long game, organically and without the normal trappings of such a venture: sales staff, marketing etc.

BK: Why has Version chosen not to promote themselves and taken, like you said, "the long game" approach?

GC: We've avoided promotion in most of its forms simply because we have a strong antipathy towards advertising and marketing. We are both British and perhaps culturally averse to the hard sell which is more normal here in the U.S., and thus haven't felt comfortable pushing ourselves on people. We prefer to let the work speak for itself.

That said, we do work with and for marketing companies from time to time -- but it's telling that the only project I can remember rejecting almost outright was advertising for big pharma. Obviously medicine is important but I feel that pharmaceutical marketing is very hard to justify ethically. Prescription drug recommendations to patients should be made only by doctors, and they should be made without bias or incentive.

BK: What was your most exciting project to date?

GC: The most exciting project for me was working with Louis C.K.

BK: Tell me more about that. Louis C.K. made a huge splash in the distribution world defined by post-Napster. Fast Company acknowledged him as one of the most innovative people in 2013. What was exciting about it?

GC: Louis CK had a clear vision: to take his own content, and sell directly to fans the way they wanted it. This came at a time when everyone working on the Internet knew the general shape of the solution -- the lack of a need for the middleman, the frustration with the grindingly eponymous distribution controls implemented by the major players. I've always been into problem-solving of this kind and into highly streamlined user interfaces, and this was a perfect opportunity to express how I thought digital commerce should be done.

That sense of the "right moment" was also complemented by the fact that "the cloud" was maturing to a point where suddenly, a very small team could create and launch a top-tier ecommerce website running that level of traffic. Louis C.K. made a million dollars in 12 days. Ten years ago, that capacity would have required a small army of staff and much more attention. Now, the cloud itself gives us much more capability and a single engineer can flick a few switches to make an application an order of magnitude more powerful in the space of five minutes.

Ultimately, that project had a significant effect on the way content was sold across the digital spectrum, and there are a slew of excellent companies like VHX working to take it to the next level. So it was tremendous to be part of that.

BK: What was an important lesson you learned from working with the entertainment industry?

GC: This is a very wide question, but I found out more about the processes small films go through over the last two years. I went to the 2012 SXSW festival for Tim Sutton's excellent PAVILION, for which we did digital design and website. I saw probably 12 films there, expecting to be delighted at every turn since this should be the cream of the crop (SXSW were quoting around 5,300 submissions). But by and large, they were mediocre. And every film was announced with the same boilerplate enthusiasm by the festival directors, which came down to nothing more than the meaningless "we picked this film for you." It's very hard to believe that the selection process genuinely sought the most daring, most interesting films of the year -- they certainly failed if that was the goal. For me this was a lesson/reminder of how institutions at every level of entertainment don't really serve the artists or the art at all.

BK: You still unashamedly ship in PHP. What is the philosophy of Version Industries that is evidenced in your work and the projects that you take on?

GC: I'm still amazed by how many people dismiss PHP! The basic thing that keeps us with it is pragmatism. We've not ignored the huge leaps in toolchain (Git, Node) that have taken place in the last decade, but PHP hasn't limited us in a way that'd make us jump ship to Ruby or something. We hew to an idealism in our design department, and a pragmatism in coding, which is a nice microcosm of us as a company.

GC: First off, it helps if you found the company when you're young and naive and happy to eat baked beans on toast (or ramen noodles, as an equivalent) for 2 years while things get going! The hardest part is the uncertainty and the gnawing stress of not making payroll and living on borrowed time when you have a dry patch. Lack of money will turn the knives inward every time and you just have to remember that and stick to the plan. The most important thing, in direct contradiction, is to not worry about the money too much; to focus on creating something genuinely valuable and to continually keep improving it. The best parts are creating things which other people use and love -- and being at the helm when you're running before the wind and the sun is out.

BK: Speaking of baked beans and ramen, where is the best place to eat in Brooklyn?

GC: This is an absurd question! You can't throw a stone but for great places to eat. The fact that the flea market is a food destination basically says it all. I go for Asian food, though, and I do have a favorite: Samurai Mama in Williamsburg.