Yenku Sesay looks down where his hands used to be. He answers my question with a sickening quickness: "1998. May 6. 10am." That was when the rebel army, led by the Revolutionary United Front (RUF), invaded Yenku's village of Kondembaya in northern Sierra Leone and took him prisoner. The rebels burned the village and gathered the civilians under the central cotton tree.

This was one of the places where the RUF began its practice of amputation on civilians during the 11-year civil war in Sierra Leone. The RUF reasoning behind the amputations was that civilians had used their hands to vote for a corrupt president and they did not deserve to keep these appendages. Yenku pleaded with the rebels not to cut off his hands. But the rebels took a certain enjoyment from the process. Each prisoner was pushed forward for his or her punishment and had to choose slips of paper in a gruesome lottery. The paper either said "short sleeve" or "long sleeve." Yenku pulled two long sleeves. His hands were severed with a machete, first the left, then the right.

Many of the victims did not survive. Yenku would likely have soon died if his father had not taken decisive action. Yenku's father used the family savings to hire a motorbike to take Yenku for treatment in a hospital hours away in the country's capital city, Freetown. Though Yenku eventually recovered from the physical wounds, his life was destroyed. He was incapable of taking care of himself and eventually resorted to begging in the streets of Sierra Leone. At about 21 years old, Yenku's daily life had been reduced to asking for handouts, with little hope of change, little chance for something better.

Were it not for a microloan, Yenku is sure that he would still be begging today. In 2006, Salone Microfinance Trust (SMT) approached Yenku about taking out a group loan with four other local borrowers. No other institutions were even willing to consider Yenku for credit because of his amputee status. However, through lengthy discussions with Yenku, SMT saw in Yenku natural business skills and a drive to be self-reliant. He was approved for 300,000 Leones from SMT, the equivalent of approximately $100 USD. Yenku used this money to develop a modest retail business. At first the business was no more than Yenku selling small items in the street, such as packaged biscuits, soaps, and other sundries. Over the past two years, by reinvesting the profits and building his credit with SMT, Yenku's business has grown to become a small shop selling an assortment of clothing, shoes, drinks, and other packaged food products. Though his shop may be considered small by US standards, the difference it has made in Yenku's life is dramatic.

When SMT took a chance on lending to Yenku, they were not giving him a free pass from poverty. Rather, Yenku accepted the responsibility of paying back every Leone he borrowed and fought to reclaim his life through his own hard work. Yenku dedicated himself to his business, and every month he made his repayments on time and often early. With the profits from his retail business, Yenku has recently expanded into livestock and agriculture. The result is that Yenku is now self-reliant. 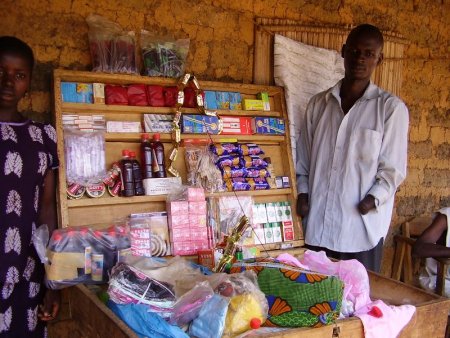 Instead of being a burden to his family or the community, Yenku has become a provider. He is able to support his family. He can feed and clothe his three children. He sends both of his school-age children to primary school, and he even pays for his younger brother's education. I see the sense of pride in Yenku's smile. From raising a family, to relearning everyday tasks as a double amputee, Yenku is rebuilding his life. And the most critical tool for Yenku has been the microloan that SMT offered him in 2006.

Though in my eyes Yenku's story is extraordinary, his success is not uncommon in Sierra Leone. As a volunteer for the Kiva Fellows Program, I personally interviewed over 60 micro-entrepreneurs in Sierra Leone during summer 2008. Each had his or her own story, each with unique personal challenges and successes. I found this opportunity when I was exploring Kiva's website earlier this year. Kiva is a non-profit microfinance organization that raises money online in simple $25 increments from everyday social investors around the world. To contribute 100% of the funds raised to micro-loans, Kiva often relies on the generosity of volunteers and the strength of its partnerships with microfinance institutions working at the village level. The Kiva Fellowship Program is a perfect example of that intersection. Kiva places fellows throughout the world on 3- to 12-month assignments to strengthen the working relationship with their microfinance partners. Fellows have been placed in countries such as Tajikistan, Cambodia, Uganda, and Guatemala, to name a few. This summer I was the first fellow placed in Sierra Leone to work with Kiva's partner Salone Microfinance Trust.

The responsibilities of my fellowship allowed me field-level insight into the promise and difficulties of a microfinance organization. But it was outside the working responsibilities of my fellowship where my understanding of Sierra Leone was fundamentally changed. Before coming to Sierra Leone, hearing about a civil war in West Africa had sounded like a different world involving people very much unlike myself. Rebels, amputees, microcredit? It didn't sound real. Watching Indiana Jones in the movie theater was more relevant to my life than the struggles of Sierra Leoneans.

I expected to meet amputees from the war; the books I had read mentally prepared me for that. Crushing poverty, well-drawn water, generator electricity, and rampant malaria were not surprising when I began my fellowship in Sierra Leone. It was the astonishingly familiar interactions with the local Sierra Leoneans that caught me off guard, the simple conversations I might have had with anyone from my own hometown in the U.S. I didn't expect my neighbor Sheka to have his favorite hip hop songs set as ringtones on his cell phone. I didn't expect Aminata to ask me if she looked like Tyra Banks with her new hairstyle. I didn't count on 10-year old Antony coming home from school with a crayon drawing of his house and family that was uncannily reminiscent of drawings I had done when I was 10. I didn't think Mohamed would ask me for help with setting up a Gmail account at the internet cafe. And I didn't expect Alhaji's obsession with his favorite football team, Arsenal.

Maybe these minor parallels to my own life don't surprise you. But for me, it was like flying half-way around the world, walking into a family's home as a stranger, and finding a photo of my own friends and family on their shelf! Wait a minute, that should not be here! What I was only able to learn through personal interaction, was that this brutal civil war, this unimaginable human suffering, this need for rebuilding a war-ravaged country, was not happening to the Sierra Leoneans I had read about in books or looked up on Wikipedia. Rather, if these people lived in the same zip code as me, we would be friends on Facebook, we would go out to Growlers Pub on the weekend, and we would play in the same football league. As my relationships with Sierra Leoneans evolved from acquaintance to friendship, the suffering this country has endured became dramatically more nauseating, more motivating.

My former travel experience has also taught me an unfortunate truth. I know that when I return to my life in the US, my memory of these vivid months will fade in the rush of new responsibilities. Each day I will remember Sheka's sense of humor a little less. Yenku's personal victory will become a little hazier. My impersonation of Mohamed's accent will become more muddled. But I optimistic that I can fight this trend. With cell phones and email I can stay in touch. Online global organizations like Kiva will allow me to make the developing world a daily part of my life. It's shockingly easy to reach Africa if I want to. For me, it's personal now.