A perennial question facing scientists is when -- and how -- to participate in public communication and policy debates around issues of social concern. This is not a new question: as long as scientists have seen a connection between their work and major challenges facing society, some have acted on a sense of responsibility to contribute to debates about how science can be harnessed to improve the world. Scientists have little political power: they are small in numbers, rarely sufficiently financially wealthy to use money as a political tool, and often politically naïve or poorly networked.

A common approach has been for groups of scientists to reach out to policymakers and the public in open letters, expressing concerns about a wide array of public policies, suggesting priorities for governments, and calling for actions around specific issues. Two early examples include the petition to the President of the United States in July 1945 from 70 scientists at the Manhattan Project calling on Truman to refrain from deploying the newly created atomic bomb, and the famous Russell-Einstein Manifesto, which called on world governments to banish war as a way to settle disputes because of the risks of global annihilation from nuclear weapons. That letter, signed by some of the most well-known scientists in modern history, stated:

"... There lies before us, if we choose, continual progress in happiness, knowledge, and wisdom. Shall we, instead, choose death, because we cannot forget our quarrels? We appeal as human beings to human beings: Remember your humanity, and forget the rest. If you can do so, the way lies open to a new Paradise; if you cannot, there lies before you the risk of universal death.
Resolution:
We invite this Congress, and through it the scientists of the world and the general public, to subscribe to the following resolution:
"In view of the fact that in any future world war nuclear weapons will certainly be employed, and that such weapons threaten the continued existence of mankind, we urge the governments of the world to realize, and to acknowledge publicly, that their purpose cannot be furthered by a world war, and we urge them, consequently, to find peaceful means for the settlement of all matters of dispute between them." 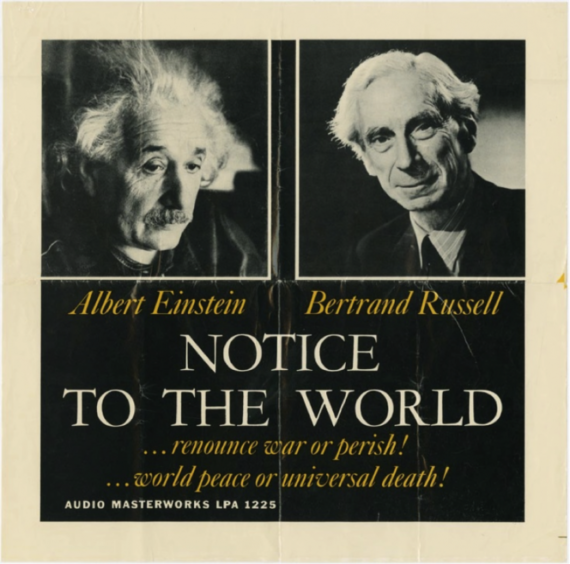 In the last few years such letters have proliferated for three reasons: (1) the open hostility of some politically powerful groups to science and scientific findings is ringing alarm bells in the scientific community that cannot be ignored, (2) scientists now recognize that the dramatic and rapid alteration of the Earth's very climate poses the second massive threat to the planet after nuclear annihilation, and (3) the ability to mobilize and collect signatures from scientists has greatly improved as networks of scientists have formed and social media tools have made it easier to organize around specific issues.

Here, from just the past few years, are some key letters prepared by scientists and sent to policymakers on issues around scientific integrity, policy, and climate change:

"For a problem as potentially catastrophic as climate change, taking no action poses a dangerous risk for our planet... We urge our policy-makers and the public to move forward immediately to address the causes of climate change, including the unrestrained burning of fossil fuels. We also call for an end to McCarthy-like threats of criminal prosecution against our colleagues based on innuendo and guilt by association, the harassment of scientists by politicians seeking distractions to avoid taking action, and the outright lies being spread about them. Society has two choices: We can ignore the science and hide our heads in the sand and hope we are lucky, or we can act in the public interest to reduce the threat of global climate change quickly and substantively. The good news is that smart and effective actions are possible. But delay must not be an option."

Letter to Congress from U.S. Scientific Societies on the Scientific Consensus on Climate Change. 2016
In June 2016, a partnership of 31 leading nonpartisan scientific associations sent a
consensus letter to U.S. policymakers
that reaffirmed the reality of human-caused climate change, noting that greenhouse gas emissions "must be substantially reduced" to minimize negative impacts on the global economy, natural resources, and human health. These scientific organization represent practically the entirety of the geosciences expertise of the nation, including:

Letter from Leading Australian Scientists to the Australian Government on Climate Change, 2016
In August 2016, 154 of Australia's leading university and government scientists sent a letter to the Australian government stating "governments worldwide are presiding over a large-scale demise of the planetary ecosystems, which threatens to leave large parts of Earth uninhabitable." The letter calls on the Australian government "to tackle the root causes of an unfolding climate tragedy and do what is required to protect future generations and nature, including meaningful reductions of Australia's peak carbon emissions and coal exports, while there is still time. There is no Planet B."

An Open Letter on Climate Change From Concerned Members of the U.S. National Academy of Sciences, 2016
On September 20, 2016, 376 members of the National Academy of Sciences, including 30 Nobel laureates, published an open letter to draw attention to the serious risks of climate change. The letter warns that the consequences of opting out of the Paris agreement would be severe and long-lasting for our planet's climate and for the international credibility of the United States.

Letter of Concern about the Views of Donald Trump on Scientific Reality, 2016
A letter from a broad coalition of scientists was released in fall 2016 expressing concern that presidential candidate Donald Trump's stated views on many topics are at odds with scientific reality and represent a dangerous rejection of scientific thinking.

Letter to President-Elect Trump and the 115th Congress, 2016
Thousands of scientists joined an open letter in November 2016 calling on the incoming Trump administration and 115th Congress to ensure that science continues to play a strong role in protecting public health and well-being and that scientists be protected from political interference in their work. The letter has been signed by thousands of scientists, including 22 Nobel Prize winners.

An Open Letter from Women of Science, 2016

In November 2016, over 10,000 women of science signed an open letter noting that science plays a foundation role in "a progressive society, fuels innovation, and touches the lives of every person on this planet." The letter expressed deep concern that

"anti-knowledge and anti-science sentiments expressed repeatedly during the U.S. presidential election threaten the very foundations of our society. Our work as scientists and our values as human beings are under attack. We fear that the scientific progress and momentum in tackling our biggest challenges, including staving off the worst impacts of climate change, will be severely hindered under this next U.S. administration. Our planet cannot afford to lose any time."

The letter reaffirmed a commitment to build a more inclusive society and scientific enterprise, reject hateful rhetoric targeted at minority groups, women, LGBTQIA, immigrants, and people with disabilities, and attempts to discredit the role of science in our society. The signers also set out a series of scientific, training, support, and policy pledges.

Letter from All Major US Scientific Societies/Organizations to Trump Transition Team, 2016
Amidst the nationwide concern about future challenges facing a Trump Administration, the nation's scientific, engineering, and higher education community wrote an open letter in November 2016 urging the quick appointment of a nationally respected presidential science advisor.

[A longer version of this essay is published at Peter Gleick's column, Significant Figures, at National Geographic ScienceBlogs.]