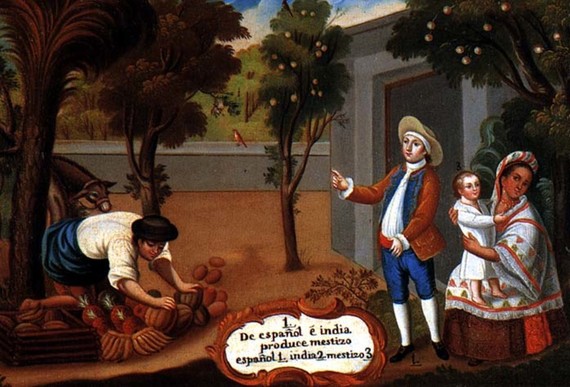 An 18th-century painting showing an indigenous woman with her Spanish husband and their child, and a plaque that says 'From a Spaniard and an Indian is produced a mestizo.' Wikimedia Commons

Any notion that the United States had become "post-racial" ended when Donald Trump, who as a candidate questioned president Barack Obama's citizenship and employed heated racial rhetoric, was elected to succeed the country's first black president.

As American social issues often do, the debate on race and equality is having an echo in Latin America. Mexican historian Enrique Krauze recently praised Latin America's "talent for tolerance" in the New York Times, noting that, as early as 1858, Mexico elected an indigenous president (Benito Juárez). Since then, 33 of the country's 36 presidents have been mestizos - that is, in Latin American parlance, someone of mixed race.

As a South American historian, this moment has also caused me to reflect on my region's own imperfect racial history. There's one unusual and controversial moment that, I hope, may prove enlightening, especially as December 2 is International Day for the Abolition of Slavery: the time Paraguay made it illegal for some people to marry within their race.

It was March 1 1814, and José Gaspar Rodríguez de Francia, was about to become "Supreme Dictator", a title he would hold until his death in 1840.

Many credit Francia with modern Paraguay's pluriethnic, plurilingual, and multicultural. He remains a mysterious figure, who had a doctorate in theology but in politics behaved as a French Jacobin. Running an austere and orderly iron-fisted government, Francia secured Paraguayan independence by isolating his nation from the outside world.

In 1814, Francia issued a decree forbidding marriages between "European men" (namely, Spaniards) and women "known as Spanish" (born in Spain or of Spanish descent). European men would only be allowed to marry indigenous, mixed-race or black Paraguayan women.

By preventing the white elite from reproducing, Francia's decree had the undeniable potential to allow the newly independent Paraguay to rise as a mixed-race nation.

But was that Francia's intent? Scholars differ on the reasoning behind his law, which is unique in all Latin American, if not in world, history.

Sergio Guerra Vilaboy sees it as an economic effort, noting that in newly post-colonial Paraguay, Europeans still held a prominent position. By curbing their power, Francia dealt "a hard blow to the old trade oligarchy of [the capital] Asunción", allowing other social classes to thrive.

For Julio César Chaves, the 1814 marriage decree aimed at reducing the the political threat posed by royalist Spaniards in Paraguay, and it was one of many such provisions. In addition to forbidding Europeans to wed Europeans, Francia also confiscated royal and church lands and gave them to indigenous peasants as "state ranches" (in return, they served as soldiers loyal to the Supreme Dictator; no one was allowed to hold a rank above captain).

According to historian Richard Alan White, all this added up to the "first autonomous revolution in the Americas": Francia launched a successful program of economic development without any foreign financing.

An alternative interpretation of the 1814 marriage decree is that it was about equality - just not racial equality.

Over the course of his reign, as historian E. Bradford Burns chronicles, Francia sought to increase Paraguayan egalitarianism. He abolished taxes paid to the Catholic Church, established religious freedom, and organised a free elementary educational system that reached a majority of even indigenous populations.

By 1840, Paraguay had emerged as "the most egalitarian society yet known in the Western Hemisphere", Burns says.

Exceptional, yes - but since when, and how much?

Intent aside, the 1814 decree did cause the extinction of Spanish Europeans as an ethnic group in Paraguay.

In that effort, Francia was building on Paraguayan initiatives to eliminate racial difference that date back to colonial times. Because virtually no European women accompanied the Spanish conquistadors and settlers who arrived in Paraguay from 1540 to 1550, all took native Guaraní women as wives.

A century later, in 1662, local authorities requested a royal proviso to categorise their mixed-race descendants as legitimate American-born Spaniards. Succeeding generations, also classified as Spaniards, were granted the same privileges as European-born Spaniards.

For American scholar Jerry Cooney, it's this proviso, which was also unprecedented and unequalled in all the Spanish Empire, that prompted Paraguayan exceptionalism.

Francia's decree 150 years late, was just another "step towards the creation of a homogeneous Paraguayan society". By 1800, well before the Supreme Dictator, "Spanish mestizos" comprised almost 60% of Paraguay's population and had become the new upper and middle classes.

Thus in Paraguay's early period, there had long been a considerable degree of racial equality, especially compared to neighbours such as Brazil or the then-United Provinces (Argentina).

Mestizo but not post-racial

But that equality only held for the mestizo ruling classes. Spanish law never allowed members of the mestizo majority to marry minority black or mixed-race Afrodescendant people (though they could occasionally wed indigenous people).

As a result, a significant divide was maintained between the ruling mestizo elite and minority populations of black, mixed-race Afrodescendant and some nomadic or un-assimilated indigenous tribes.

Francia never questioned these principles on a moral basis. On balance, his regime consolidated the political hegemony of the mestizo class, with policies such as land redistribution and universal education also benefiting large indigenous groups. But black, mixed-race people and certain nomadic native tribes were left out of the equation.

It is difficult to evaluate whether Francia's marriage decree has had an impact on present-day Paraguay. On the one hand, it quickly fell into disuse after his death and nearly all of Paraguay's male population was annihilated in the War of the Triple Alliance (1864-1870). On the other, today Paraguay proudly considers itself a mestizo nation, with Francia as its founder.

So what can this slice of history offer modern readers? For me, it reiterates the fact that "post-racial" does not exist. The recent US election disappointingly proved that racial intolerance (alongside gender prejudice) remains very present in that country. Similarly, after Francia's reign, oligarchic governments and military dictatorships introduced new forms of racism and intolerance to Paraguay. Today, indigenous peoples still suffer discrimination.

Americans and the world saw the Obama years as the embodiment of social progress. But, as Paraguay's exceptionalist period reveals, progress is complex, and it can quickly be undone.