Last year, city leaders stood at Hotel de Ville in Paris to fight for the same goal: to keep global temperature rise below 2°C. Paris marked a historic moment for international diplomacy, and today, we are standing up to support the heads of state and Secretary General Ban Ki-Moon in New York City for the signing of the landmark Paris Agreement. 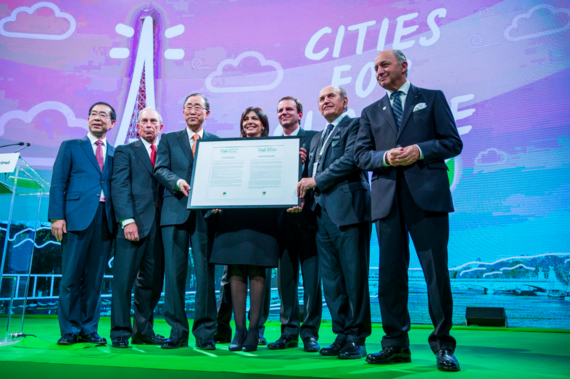 While robust national commitments are essential in the fight against climate change, strong city leadership is necessary in taking direct action to reduce greenhouse gases.

We are proud of our national leaders for making these robust commitments that are essential in securing a climate safe world in the future. But we are also proud that it is strong city leadership and our commitment to direct and immediate action that can help make the difference right now.

Nearly 1.4 million residents are added to urban areas each week, and by 2030, approximately 60 percent of the global population will live in cities. As the urban population grows, opportunities to efficiently and economically address climate change arise as well.

Our cities each face unique and challenging climate risks, but what connects our cities is our work as incubators for innovative climate programs that revitalize green open space, encourage low-carbon and resilient infrastructure and drive investment in new energy alternatives that support economic development.

The connection among local leaders and our ability to collaborate underscore the power of local action across the globe. Anne Hidalgo, Mayor of Paris and Michael R. Bloomberg, UN Special Envoy for Cities and Climate Change, hosted the Climate Summit for Local Leaders during COP21 to share how cities are already taking action and support the groundbreaking efforts by national governments to come to a global climate agreement.

Our commitment and our voice become stronger by a common platform like the Compact of Mayors, which supports planning, executing and measuring climate progress. Cities can reduce greenhouse gas emissions, increase resiliency and track our progress transparently, and we now can aggregate the impact of all climate action in cities committed to the Compact of Mayors.

The Compact of Mayors is the most powerful way to capture city commitments and drive national commitments: in 2016 we hope national governments will better recognise cities' contributions to the NDCs.

At the time of COP21, we announced that the 360 cities committed to the Compact of Mayors were ready to deliver up to half of the world's potential urban emissions reductions by 2020. Together, these Compact commitments accounted for a reduction of .74 Gt CO2e annually or more than a total of 9 Gt CO2e by 2030 (the equivalent of taking 2 million cars off the road). Since we gathered in Paris, that number has grown to more than 460 local governments from all continents and regions across the globe, representing over 390 million people.

Through the Compact of Mayors these cities have the potential to cut global emissions in 2030 by as much as 25% of the "gap" between national pledges made in advance of COP21 and the "2 degrees" Celsius emissions reduction pathway identified by the scientific community.

The world's urban citizens are already deeply affected by the impacts of climate change, and as mayors, we have a direct responsibility to our citizens. Compact, connected, and coordinated cities will be the successful cities of the future - those who build cycle paths not roads, provide more green space and cleaner air for their citizens. That is why we are ready and willing to help nations deliver on the commitments made in Paris and begin this important work in advance of 2020.

Indeed, collaboration between different levels of government will be key in the coming years, and we should look to each other as partners in this crucial fight against climate change.

As the global community works towards implementing the Paris Agreement and prepares for Habitat III in Quito and COP22 in Marrakesh, cities will continue to demonstrate climate leadership and work collaboratively with each other and with national governments to find innovative solutions. Today, cities and nations alike have the opportunity to build on the momentum created in Paris. We have the opportunity to put the world on a low-carbon pathway. Let us seize it.