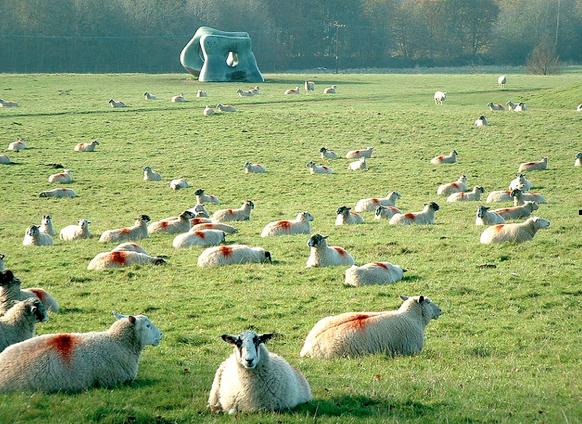 Henry Moore, Large Two forms, 1966, before its removal from the Yorkshire Sculpture Park, West Yorkshire, England. This sculpture had recent stints inside two Gagosian galleries. (The spots on sheep are a harmless marking system used by the farmer.) Photo courtesy of Nigel Homer, reproduced by permission of The Henry Moore Foundation

For the better half of a year the sheep at the Yorkshire Sculpture Park have been without their favorite Henry Moore sculpture, Large Two Forms. The mastodon-sized bronze had made a six million dollar windbreak and some shade for the animals. Here is what the sheep did not know: Large Two Forms was on temporary loan from the Moore Foundation and its gig in the park was up.

In November of last year, The Moore Foundation combined powers with a blue-chip megaforce, the Gagosian Gallery, to relocate a dozen large outdoor Moores ( Large Two Forms included) into the confines of Gagosian's white-walled interiors.

The experimental exhibition was a lesson in curating worth remembering. It made me feel like I was seeing Moore's sculpture for the first time -- not as the sculptural wallpaper they can so easily become after decades of seeing them in their ubiquitous habitation of campus lawns, tree-lined walkways, and public and private outdoor spaces of all kinds.
There were two iterations of this exhibition (Henry Moore: Late Large Forms) from 2012 and into 2013 in London and New York, respectively. 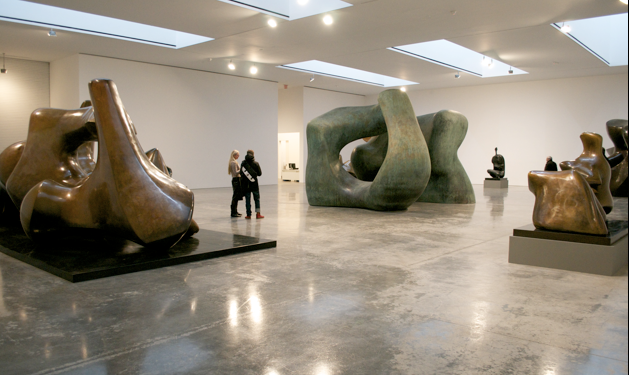 Now here's the rub. Moore had not intended for these enormous bronzes to be on view in an interior gallery space. And it is impossible now, of course, to know if he would have approved of giving new thought to his sculpture through such a major meddling with the context of this work. (Moore died in 1986.) I would never have expected this kind of 21st century experimentation with the work of a 20th century icon. But that is why I was won over immediately.

This kind of curating has guts because mischievous re-contextualization (and deconstruction) without artist permission has some ignoble lineage. For example, under Kirk Varnadoe's watch, the Museum of Modern Art, NY allowed Scott Burton to dismantle Brancusi sculptures to display the pedestals as art (circa 1989). I do not wish to stretch this comparison too far, as the Moore experiment had none of this postmodern over-boil.

In a New York Times interview, Moore Foundation curator, Anita Feldman, stated, "One of the great challenges as a curator of Henry Moore's work is getting beyond general perceptions. People think they know Moore because his work is all over the world. I wanted to do something that would change how you approach the work, how you read the forms. Here, you don't have the distractions of nature. The pieces evoke the feeling of the sublime in sculpture, nature as overwhelming and slightly threatening, and I think that aspect is even more pronounced in an interior space." 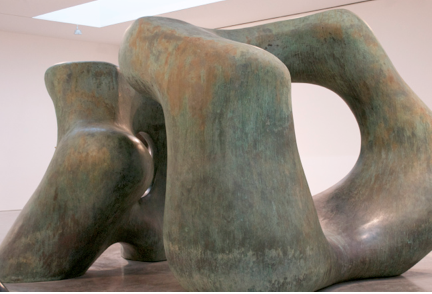 Moore's sculptures are well known as abstractions of the human form with shapes protracted from bones, shells, and flints. The 1966 diptych, Large Two Forms is a premium example of the outdoor bronzes and it anchored the show. Fifty years of the outdoors had been inscribed into the diptych -- from rain streaks to spots worn smooth by sentients and non-sentients alike. Sheep are utilitarian in their approach to art and clearly have seen the bulk of Large Two Forms as shelter and a good place to rub.

It is not just the bronze that had come in out of the meadow, but the aura of out-there-ness as well. This was apparent as I brushed against Large Two Forms while passing through the narrow slot between these monoliths. There was a Whitmanesque sort of pleasure in this, and to have that kind of feeling indoors was unusual. Moore thankfully made these outdoor sculptures to be touched.

In the gallery context, compressed together and pressing outward, like giants within a room, all of the large Moores commanded renewed attention for three reasons. First, no singular sculpture took center stage, as is often the case when placed outside. And second, no competing bigger objects were in sight other than benign interior walls. Third, the sculptures became "the" color feature with nature's rich hues exchanged for a white interior. The real power at work here is that of relativity. In his book, Interaction of Colors, Joseph Albers showed us that the character of a color depends in great part on what surrounds it. Context was Albers' witchcraft that could turn blue-green to blue. (By removing blue-green from a white background and importing it onto a green background).

Describing the impetus for his largest outdoor sculptures in a Moore Foundation documentary, Moore explained, "In Yorkshire, in Adele Woods just outside Leeds, there was a big rock amongst many that I called Adele Rock. That influenced me quite a bit. For me, it was the first big bleak lump of stone set in the landscape surrounded by marvelous gnarled prehistoric trees. It had no feature of recognition; no copying of nature -- just a bleak powerful form. Very impressive."

What I find interesting in this remark is the equally passionate recalling of both object and context. Of course, Moore mulled over context. I do hope for the best: that he would have approved of this experimental exhibit that has done a great service for the Moore legacy.

The fate of Large Two Forms? This has not been revealed yet by the Gagosian gallery or the Moore Foundation and they declined to make a further comment at this time.

An exhibit like Late Large Forms may never again be assembled. But there is some consolation in the 2013 Tate Britain opening of two dedicated galleries for Henry Moore's work in which a small number of outdoor Moores have been placed inside with the indoor sculptures.

My hope is that the full Gagosian model would be used in a permanent museum installation at some point. Many others should witness the outdoor Moores under the superpower of the innovative curator, in the ricochet of the white cube.


More images of the exhibit:
http://www.gagosian.com/exhibitions/henry-moore--november-20-2012/exhibition-images

The Art of Henry Moore, a documentary film made in association with the Henry Moore foundation:
http://www.factualtv.com/documentary/The-Art-of-Henry-Moore