As does Fred Willard. You'd think -- given that this veteran actor / comedian turned 75 back in September -- that Willard would finally begin to slow down at this point.

Well, think again. For this Fall has been full of firsts for Fred. Take -- for example -- last month, when Willard made his daytime drama debut on The Bold and the Beautiful. Fred appeared in four episodes of this long-running CBS soap opera back in October and loved every minute of it. 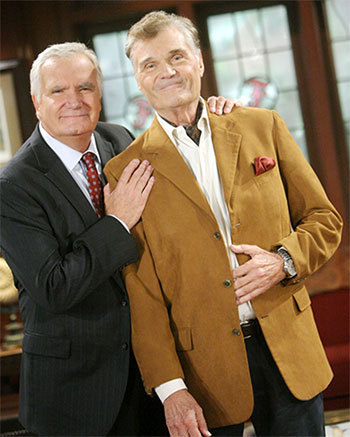 "I've always wanted to be on a soap opera," Willard admitted during a recent phone interview. "Because I started my career in improv, performing with Second City and the Ace Trucking Company, I always enjoy being in situations where -- as an actor -- you have to think fast & be light on your feet. And when you're working on a soap opera where every scene is like this quick one-act play and you have to learn all of your lines and the blocking on the fly ... Boy, you really do have to work fast."

Mind you, Fred finds himself in a similar situation this week at Lincoln Center's Avery Fisher Hall. Where -- after a very limited amount of rehearsal -- Willard is playing the part of Cap'n Andy in an all-star concert production of Jerome Kern & Oscar Hammerstein II's Show Boat, which the New York Philharmonic is presenting now through November 8th.

"I have to admit that I was a little nervous about this one," Fred said. "I mean, I was initially tickled to be offered this opportunity. But at the same time, in this production, I'll be sharing the stage with some really amazing actors and singers. People like Jane Alexander & Vanessa Williams. Which is why I thought that I'd better do some prep prior to playing Cap'n Andy. So I then went out and rented all three different movie versions of Show Boat. Which -- as it turns out -- wasn't as helpful as I thought it might be, given that the three movie versions of Show Boat all have different plots and go off in different directions. Luckily, this concert production that I'm appearing in is kind on an amalgamation, a best-of version of Show Boat. So hopefully some of the prep that I've done will eventually pay off." 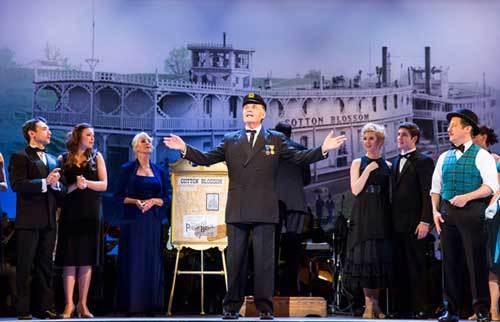 So does Willard do this kind of prep for every part that he plays? Take -- for example -- the Secretary of the Interior as a car. Which is the character Fred voiced in Disney Planes: Fire & Rescue (FYI: The Blu-ray & DVD version of this recent Disneytoon Studios production hit store shelves on Tuesday).

"In this particular case, I honestly didn't have to do a lot of prep. Mostly because I've been playing these sorts of stuffy bureaucratic characters since back in the H.R. Haldeman days. People hire me to play politicians because -- thanks to my background in improv -- I can usually put a comic spin on acting stiff & straight," Willard explained.

"But what was kind of interesting this time around was -- when I first went in to record on Planes: Fire & Rescue -- the part of the Secretary of the Interior was fully scripted. So they didn't really want me to improvise. They showed me a rough sketch of what my character would look like and then asked me to read the lines as written. But a week or so later, Disney called me again and said 'Now John Michael Higgins is coming in. And we'd like to have you also come in and then get the two of you to kind of banter back & forth. See what you guys could improvise while you're in character," Fred said. 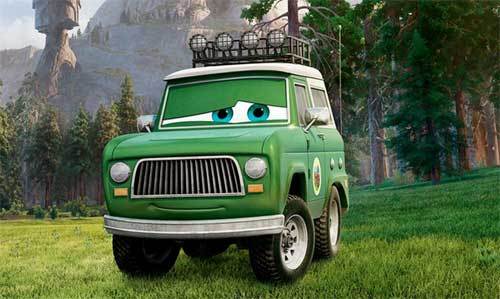 "Now when you work on an animated film, it's pretty unusual to have two people in a recording booth at the exact same time. Most for technical reasons. You don't want the two voice actors overlapping their dialogue or stepping on each other's lines," Willard continued. "I love John Michael and we had a lot of fun at that particular recording session. And I guess that what we improvised in character that day must have been okay. Because when I saw the finished version of Planes: Fire & Rescue, I honestly couldn't tell the difference between what John Michael & I had improvised and what had been previously scripted. It all fit together pretty seamlessly."

So which does Fred prefer doing these days? Working onstage? Getting behind the mike and doing voice-acting? Or perhaps it's appearing in sitcoms. Obviously his peers appreciate what Willard has been doing on the television side of things. Given that -- in recent years -- he's received three Emmy nominations for his performance as Robert Barone's father-in-law on CBS's long-running hit sitcom, Everybody Loves Raymond. Not to mention an Outstanding Guest Actor in a Comedy Series Emmy nod that Fred got for playing Phil Dunphy's father, Frank on that ABC smash, Modern Family.

"I love working with Ty Burrell. You know, he and I actually worked together on a TV series a year or so prior to Modern Family. It was this Kelsey Grammar show set in a news room called Back to You. I played sports anchor Marsh McGinley while Ty played Gary Crezyzewski, the field reporter on that show. He was the guy that the news director would send out to cover snowstorms or freeway chases. And I would just laugh & laugh at everything that Ty did. He's this extremely talented, very sweet guy," Willard remembered. 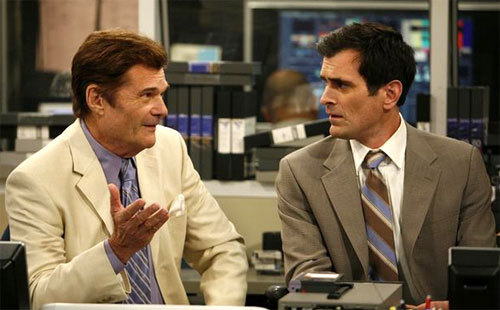 Well, Back to You only lasted a single season. But given that Steven Levitan & Christopher Lloyd -- the creators & executive producers of that Fox sitcom -- so enjoyed working with Fred & Ty that when they got Modern Family set up at ABC, Levitan & Lloyd immediately invited Willard & Burrell to come be part of that show as well.

"I really enjoy working on Modern Family. The only problem with playing Frank Dunphy is that -- according to that show's storyline -- Frank lives in Florida while the rest of the Dunphy clan lives in California. So given the geographic challenges, it's sometimes tough for the writers to come up with a logical new story-driven reason to bring Frank back on the show," Fred explained. "Of course, the nice thing about today's technology is that Phil & Frank can sometimes communicate via Skype. That's what we wound up doing last year on that episode where we did that fun parody of Apollo 13 where my character -- via video chat -- had to walk Phil, Manny and Luke through how to repair Jay's lunar module model. Of course, when I was on Skype, I wasn't actually down in Florida. I was just one room over. But that's the magic of television."

Anyway, when I pressed Fred about what his absolute favorite gig was, Willard's answer kind of surprised. It wasn't his break-thru role, announcer / sidekick Jerry Hubbard on Fernwood 2 Night. Nor was it any of those semi-improvised parts that he'd played in Christopher Guest mockumentaries like Waiting for Guffman, Best in Show, A Mighty Wind and For Your Consideration. But -- rather -- the 100+ skits that he did with Jay Leno for NBC's The Tonight Show. 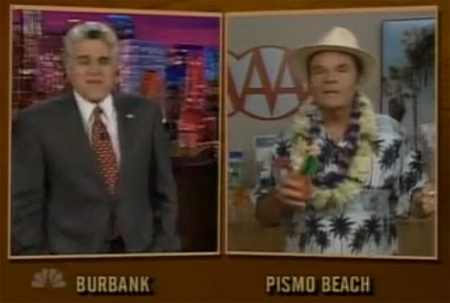 "Honest to God, that was my favorite job. Appearing on The Tonight Show with Jay Leno was like an actor's dream because you'd come in and just rehearse each sketch once. It'd be just me and Jay up onstage and we'd go over the bit, joke by joke," Willard recalled. "And Jay? In real life, he was just like you'd expect him to be. I mean, no one knows more about comedy than Jay Leno. But when we were going through the script for each sketch, Jay would actively seek out my input. He'd say things like 'That bit, Fred? Do you think it's funny?' and I'd say 'Jay, I think that that's going to get a laugh.' So it was very much a collaborative process."

"And the very best part is that -- while I was backstage, getting ready to go on -- the producer of the Tonight Show would come up to me and then say 'Now try to make Jay laugh. Feel free to ad-lib.' So to have that level of trust with the people who are producing this huge network show, to have them actively encouraging me to go off-script, that was an absolute thrill," Fred continued. "So you'd do the sketch and then go home. And by 11 o'clock that night, there it was on national television. There were no notes afterwards. No second take. No 'Let's come back tomorrow and try to make this better.' No waiting six months to see if what you'd done was any good. I loved the immediate gratification of it all. I found the whole experience to be very fulfilling."

Given how generous Leno was with Willard ... Well, that's why Fred was thrilled to hear that Jay had recently been honored with the Mark Twain Prize for American Humor in a ceremony which was held at the Kennedy Center in Washington, D.C. "Jay's a wonderful guy. Long overdue for this sort of professional recognition," Willard said. 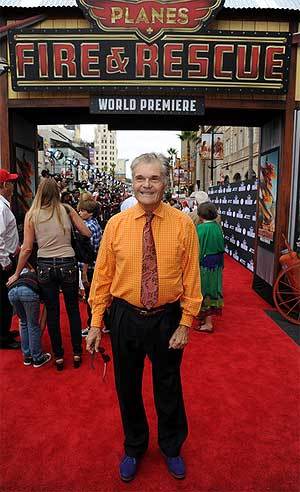 Of course, one might say the same thing about Fred Willard. But to Fred's way of thinking, that the casting people are still reaching out and offering him opportunities to do things that he's never before -- like soap operas and concert performances of classic Broadway musicals -- is a reward unto itself.

"Which isn't to say that I'm not willing to repeat myself sometimes. Like if Disney wants to make another Planes movie. I had a great time doing Fire & Rescue. Plus I love the message that this motion picture tried to put across. So if Disney wants me to come back and do the voice of the Secretary of the Interior again or voice an entirely different car, I would totally be up for doing that," Willard concluded.