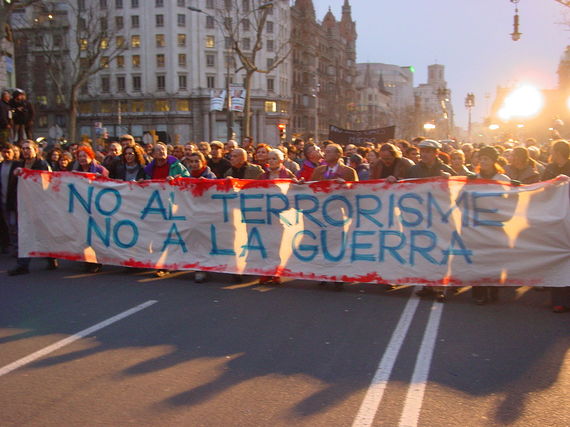 President Obama's remarks about Putin in Paris on Tuesday about Syria were remarkably ironic: "The Russians now have been there for several weeks, over a month, and I think fair-minded reporters who have looked at the situation would say that the situation hasn't changed significantly.

"In the interim, Russia has lost a commercial passenger jet. You've seen another jet shot down. There have been losses in terms of Russian personnel. And I think Mr. Putin understands that with Afghanistan fresh in the memory, for him to simply get bogged down in an inconclusive and paralyzing civil conflict is not the outcome that he's looking for."

Obama seems capable of scrutinizing the hard effects of Russian foreign policy, but not his own. "With Afghanistan fresh in the memory" said the U.S. president, presumably about the Russian intervention there that ended decades ago -- and not the U.S. intervention which is prolonged and ongoing. He can see the speck in Putin's eye, but not the log in his own. To say nothing of the fact that the U.S. started the Mujahideen to make the Russians bleed.

The U.S. has been bombing the Mideast for literally decades now -- not a month -- and has yet to make a serious accounting. A few hours after Obama made those remarks, Pentagon head Ash Carter announced the U.S. was expanding its military actions in Iraq.

While it rarely occurs to anyone to question that the stated goals of the U.S. government might not be the actual goals, it's rarely thought to examine the stated goals of the 9/11 or Paris attackers. And while many have noted rightly noted that the "terrorism" label is applied selectively, most recently, regarding the shooting at a Planned Parenthood clinic in Colorado. But even beyond the use of the word "terrorism" -- the very notion of explicitly articulating a motive is selective. When talking about things like the Nov. 13 Paris attacks, the notion of "motive" doesn't enter into it; indeed, talk of "terrorism" or "war" is partly a substitute for thinking through a motive. In the case of the Planned Parenthood attack, it's seemingly taken for granted that someone can be opposed to abortion rights and be opposed to violent attacks on abortion clinics. But it's not a point taken to heart when examining U.S. -- or French, or British -- foreign policy.

But one nation seems to have come to grips with this, at least to an extent: On March 11, 2004, a series of nearly simultaneous bombs exploded on four commuter trains in Madrid. The blasts killed 191 people and wounded nearly 2,000.

That same day, the august UN Security Council passed resolution 1530 that condemned in "the strongest terms the bomb attacks in Madrid, Spain, perpetrated by the terrorist group ETA." Of course, it quickly became evident ETA -- a Basque separatist group -- had nothing to do with it.

This was a rare instance of officialdom didn't seek to "blame the Muslims" after a bombing. And for good reason. The ruling party in Spain, the inaptly named Peoples Party, had dragged the country into the Iraq war a year before and they feared with good cause that if the attack was shown to be Mideast related, the public would be furious -- and an election was scheduled three days later. In fact, the day of the election, al-Qaeda claimed responsibility.

Part of what was pivotal and crucial was that there were substantial protests in the immediate aftermath of the bombings. This included protests under the banner banner "No to Terrorism -- No to War." [See pic.]

The Socialist Party had promised to remove Spanish troops by June 30th, and, after winning the election, the troops were withdrawn a month earlier than expected. I can't find a record of any Mideast-related attacks in Spain since.

In contrast: On July 7, 2005, there were a series of bombings of the public transit system in London, killing 52 people and injuring hundreds more. Perhaps notably, There was a G8 meeting in the UK at the time, somewhat similar to there being a major climate conference in Paris now. Following those bombings, Britain has not meaningfully altered its stance in the Mideast.

There's been much made in some circles about the French, who were derided in the U.S. during the buildup of the 2003 Iraq invasion, now leading the fight in Syria and François Hollande's pro war rhetoric.

But the apparent change in positions actually makes perfect sense when you consider the imperial histories: Iraq was a British colony, and so -- as one would expect -- Britain helped the U.S. establishment in occupying Iraq in 2003. Similarly, Syria is a former French colony, so France took the lead in intervening there.

The fact that the interventionist dynamics line up with the imperial histories in itself is damning to the Western powers.

The imperial mindset toward the Mideast is evident throughout. It's brazen in the case of Israel's active settler colonial project against the Palestinians. It's clear in the alliance between the U.S. establishment and the Western-installed monarchies of Saudi Arabia, Jordan and other regimes. And the mindset is even evident in the case of Iran, as former U.S. Secretary of State Hillary Clinton stated at the conclusion of the nuclear agreement with Iran earlier this year at the Brookings Institution: "I don't see Iran as the partner in this agreement, I see Iran as the subject of this agreement."

The imperial legacy is shown in restrictions to domestic freedoms as well. There's the rhetoric of "Liberté" in France, but the state of emergency in France and prohibition of protest has its roots in laws enacted from Frances colonial war with Algeria. Unfortunately, many in France seem to be acting like "surrender monkeys" when it comes to abrogating their freedoms.

You can be an emissary of empire or a decent democracy. Choose.

The motives proclaimed by those claiming responsibility for attacks like 9/11 were never meaningfully discussed. They should be now, especially given the widespread sense that ISIS is not adopting tactics from al-Qaeda.

Osama bin Ladin addressed the U.S. public just before the 2004 election thus: "Contrary to Bush's claim that we hate freedom -- if so, then let him explain to us why we don't strike for example -- Sweden? ... But I am amazed at you. Even though we are in the fourth year after the events of September 11th, Bush is still engaged in distortion, deception and hiding from you the real causes. And thus, the reasons are still there for a repeat of what occurred."

Around the same time, said Bin Ladin: "When I saw those destroyed towers in Lebanon it sparked in my mind that the oppressors should be punished in the same way and that we should destroy towers in America so that they can taste what we tasted and so they will stop killing our women and children." See my piece "U.S. Policy: 'Putting out the fire with gasoline'?" based on interviews with Lee Hamilton and Thomas Kean,

This passage is almost never cited, and its context outright falsified by Donald Rumsfeld in his book, where he claims Bin Ladin was "referring to the destruction of the Marine barracks and the bombing of the U.S. embassy in Beirut." Robin Wright correctly notes in her book the context was that bin Ladin was referring to "Israeli's 1982 invasion of Lebanon with American arms."

Paris and London should be looking toward Madrid in taking steps toward shedding their imperial mindsets in stopping their war-obsessed elites. Hollande is clearly escalating the bombing that France has been conducting in Syria for over a year -- calling for "merciless" bombing. British Prime Minister David Cameron is now pushing for Britain to join the bombing in Syria -- in effect adopting a U.S. style of ecumenical imperialism -- and not just in their traditional domains like Iraq.

It doesn't have to be this way. History can change. And the fact is that there is a great legacy of anti imperialism in the U.S. that's continually overlooked. The name Mark Twain is revered now -- the comedian Eddie Murphy just received the Mark Twain Award at the Kennedy Center with great fanfare. But what's typically ignored is Twain's opposition to the U.S. becoming a global imperial power. In 1898, he helped found the Anti Imperialist League and wrote in 1900: "I have read carefully the Treaty of Paris [between the United States and Spain], and I have seen that we do not intend to free, but to subjugate the people of the Philippines. We have gone there to conquer, not to redeem.... And so I am an anti-imperialist. I am opposed to having the eagle put its talons on any other land." Of course, U.S. colonialism actually goes backs to its own roots as a settler colonial state against the natives peoples of North America.

So, Spain -- though it's of course still a NATO member that gave NATO support during its bombing of Libya, which has led to massive disaster there -- at least took a step away from the abyss with positive results. This is in contrast to "leaders" in Paris, London, Washington and elsewhere who are plunging headlong into it. They would seem bent on some combination of deluded death wish for disaster and Machiavellian colonial goals. Or perhaps just the self-importance involved in waging violence and playing the deadly game of brinkmanship as millions look on.

In 2013, a British soldier was killed in the English town of Woolwich, in London. Michael Adebolajo, one of the killers, explained his aim in vivid terms -- literally with blood and knives in hand: "Remove your governments, they don't care about you. You think David Cameron is going to get caught in the street when we start busting our guns? You think politicians are going to die? No, it's going to be the average guy, like you and your children. So get rid of them. Tell them to bring our troops back so can all live in peace. So leave our lands and we can all live in peace. That's all I have to say." [transcript and video]

As in the case of attacks on abortion clinics, people should listen closely for motive to better understand the choices before us.

And the choices may well be: Western empire or a meaningful democracy. Choose.

Sam Husseini is communications director for the Institute for Public Accuracy. He also founded the website votepact.org, which encourages principled progressives to work with conscientious conservatives.