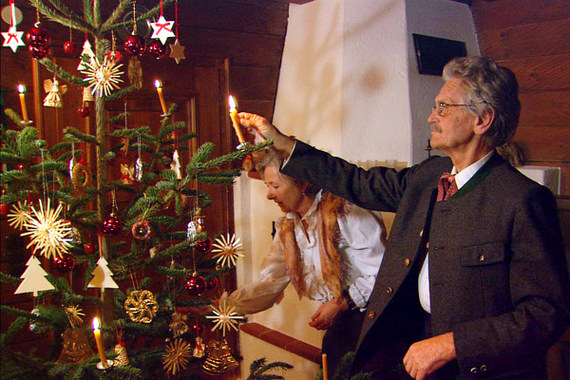 Here's an excerpt from my Rick Steves' European Christmas book, explaining how our tradition of decorating Christmas trees came to be:

The Christmas tree's roots run deep into the origins of the midwinter celebration. When winter's gloom descended on ancient pre-Christians, they looked around and saw a few things that didn't die: evergreens. This seemed to promise that the warmth and fertility of summer would return. After they decorated their huts with holly, ivy, or laurel, they likely took a deep whiff... and dreamed of spring.

The mysterious Druids, the priests of the ancient Celts, adorned their temples with evergreens as a symbol of everlasting life. The Vikings of Scandinavia considered evergreens the favored plant of their sun god. In many regions, people believed that evergreens, especially mistletoe (which was considered a sacred plant), would keep away witches, ghosts, evil spirits, and illness.

The custom continued in Christian times, but it wasn't until about 500 years ago in Germany that the practice of decorating evergreen trees became a part of Christmas. These first trees were strewn with cookies, apples, nuts, and sugar sticks -- which children eagerly raided. In the 1800s, when candles became affordable, the tree of lights arrived, and the tradition of the family gathering around the tree to exchange gifts was established.

Lutherans like to believe (wrongly, according to scholars) that Martin Luther, the 16th-century Protestant reformer, first added lighted candles to a tree. The story goes that when he was walking home one winter evening, composing a sermon, he was awed by the brilliance of stars twinkling amidst evergreens. To recapture the scene for his family, he erected a tree in the main room and wired its branches with lighted candles.

Christmas trees as we know them got a big boost in popularity in the mid-19th-century, after a London magazine showed Queen Victoria, Prince Albert, and their family gathered around a Christmas tree. Victoria was a favorite with her subjects, and what she did immediately became fashionable -- not only in Britain, but in East Coast American society as well. In the early 1900s, during the Art Nouveau age, trees began to be draped in tinsel and ornamented with lovingly painted glass bulbs. The Christmas tree had arrived.

In Germany -- the land of O Tannenbaum -- Christmas trees became so popular that during World War I, thousands of them were actually mailed to soldiers on the Western Front. These tiny fake trees, made of feathers and paper, came in a kit, ready to be assembled right out of the postage box. (Next time you're in Germany's Rothenburg, you might enjoy the excellent little German Christmas Museum at the Käthe Wohlfahrt Christmas store.)