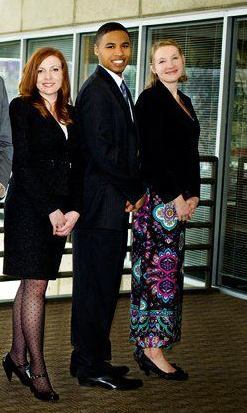 If you went to the Park Meadows Mall in Lone Tree, Colorado in 2006, chances are you met George Springer. The then 19-year-old Arapahoe Community College drop-out worked in almost every store, if he lost one job, he walked downstairs and picked up another one within the hour. "I made a career out of the mall," Springer, now 27 and a junior enrolled at Metro State University of Denver, CO. Over the next few years, Springer bounced from job to job. "When I left the mall I got my real estate license, I wanted to be an entrepreneur, but I knew nothing about real estate." Shortly thereafter, the market crashed and Springer found himself selling cars and other odd jobs lasting only a few months at a time until, at 24 he realized he needed a new plan.

Springer -- the third of four children -- is a first-generation college student, "I was the bad kid, I was the problem child. No one thought I was going to college," he laughs. "It wasn't my grades, school was always easy. But I was unfulfilled by school, I felt trapped." Springer's father received a full athletic scholarship to Adams State University but after slipping on ice and injuring his back while helping a woman jump her car battery in a blizzard, basketball and school were out of the question. He dropped out and started his own business to support his wife and new family. Springer's mother withdrew from college when she became pregnant with her first child and never looked back. But they would not tolerate the same from their children. Springer's older brother attended Morehouse College, an historically black university in Atlanta and graduated Suma Cum Laude with a degree in Business Finance. His sister graduated from Clark-Atlanta University with a degree in Communications and his youngest brother is on track to graduate from MSU this spring, all four Springer siblings took out loans to pay their own way through school. After watching his three other siblings enroll and succeed in colleges across the nation while he sold cell phones, Springer decided to give academia another try.

Growing up, Springer recalls spending hours on end playing with Legos claiming it was the only thing he enjoyed but he never thought anything of it. After speaking with his mother about a time in his childhood when she designed the family's new house and he had been able to watch the process from start to finish, Springer invested in some architecture books and software. In his spare time, Springer began designing houses and building floor plans. He enrolled at MSU, initially planning to study architecture but an influential student advisor suggested engineering instead and Springer fell instantly in love. "I grew up," he said, matter-of-factly. "That's when I realized I love this. I got tired of being looked at a certain way because of the color of my skin, I never let race stop me from doing anything I wanted before. Why should I be just another black man selling cars?"

George will be the last of the Springer siblings to receive his diploma but that is not stopping him. "I want to be the best at everything," he smiles, then blurts, "wait... don't put that in there," then just as quickly, "ok, go ahead." With a little under a year of school left, Springer is already looking to the future,"I registered my firm's name last month, we're Bimworx LLC. I'm still in the planning phase but I'm doing this."

George is an example of someone who re-cast his life's vision, amounted to his purpose and developed the habits and skills to make his dreams reality.