Mstislav Rostropovich, considered one of the greatest cellists of the twentieth century, was born in the Soviet Socialist Republic of Azerbaijan in 1927. Graduating from the Moscow Conservatory, Rostropovich quickly established himself as the preeminent concert cellist in the USSR, collaborating with composers such as Shostakovich, Prokofiev, and Britten. In 1955 he married Galina Vishnevskaya, a soprano at the Bolshoi Theater in Moscow. Though he was immensely popular as a musician, Rostropovich's outspoken political views and support of Alexandr Solzhenitsyn and other dissidents prompted the Soviet government to restrict his foreign travel and performances within the Soviet Union.

In 1974, while in France for a series of performances, Rostropovich requested permission from his government to travel to New York for a concert at Lincoln Center. The musician made the trip west with his family despite his government's refusal, and his Soviet citizenship was revoked in 1978. In 1990, as Mikhail Gorbachev worked to reform the USSR, Rostropovich returned to Moscow as conductor of the U.S. National Symphony Orchestra for a series of performances, and in that year his Soviet citizenship was restored. He died in Russia in 2007. 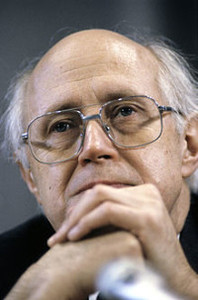 This account was compiled from interviews by ADST with Peter Murphy (interviewed beginning April 1994), a consular officer at Embassy Paris, and Philip Brown (January 2012), a Minister Counselor for Press and Cultural Affairs at Embassy Moscow. You can read the entire account on ADST.org. This Moment was edited by Thomas Zadrozny.

MURPHY: I handled a rather particular visa case. It involved the noted Soviet [cellist and conductor] Mstislav Rostropovich, his wife Galina Vishnevskaya and their two daughters (seen left). One cold winter day towards the close of business at the Embassy - dark, windy and very cold - as only a Paris winter late afternoon can be, I was about to see my last appointment of the day - Mrs. Arthur Rubinstein [the wife of the concert pianist.] I believe this was in the winter of 1978. I went out to the waiting room and found her engaged in deep and animated conversation with a short, pudgy Russian who was introduced to me as "Slava" Rostropovich.

I confess I did not recognize the name but Mrs. Rubenstein told me he was a well-known musician in the Soviet Union. She also offered to translate for the gentleman as he spoke no French or English. It turned out that the Soviet government had given Rostropovich, his wife and children permission to come to Paris for a series of concerts, but he was obliged to return to Moscow immediately upon their conclusion, which was in a week or so from the date of our meeting.

Rostropovich had, in the meanwhile, received an invitation (which he showed to me) to perform three concerts at Lincoln Center in New York City. He had been that morning to visit the consular section of the Soviet Embassy in Paris to request that his passport be amended to permit a week's travel for himself and family in New York. The Soviet authorities laughed at him and said that it would take the Foreign Ministry at least two months to reply to such a request - and the answer would surely be NO!

Rostropovich was really worked up at this point in the conversation and threw his passport on my desk. "You tell them they can keep it," he said to me. "I want to be stateless. I'll give up my Soviet citizenship if they won't let me go to New York."

220px-Mstislav_Rostropovich_and_Galina_Vishnevskaya_NYWTS_croppedI calmed him down and told him that I knew my colleague - the Soviet Consul General - and would speak with him in the morning. Rostropovich arranged to return to my office with Mme. Rubenstein the following day. In my conversation the next morning with the Soviet Consul General, I explained what I knew of the situation and told him that his nation would lose one of its greatest musicians if he was unable to obtain permission for the short visit to New York. (Rostropovich and Galina Vishnevskaya seen at right.)

Needless to say, permission arrived from Moscow in two days - - and off the family went to New York City ... never to return to the Soviet Union! Their flight was denounced in the most vile of terms by the Soviets, and the family was stripped of their Soviet citizenship. A couple of years later, Prince Ranier of Monaco granted the family Monegasque Service Passports to enable them to travel at will.

We often saw Slava and Galina over the years, and wherever he was performing, my wife and I had gratis front row seats. When he became director of the National Symphony in Washington we often heard him perform. We were invited to both daughters' weddings. Also, at the palace in Monaco, Slava performed for a select group for the 25th Wedding Anniversary of the Prince and Princess. We were guests in the Palace at that time for the weekend of celebrations - having come from Genova where we were posted... 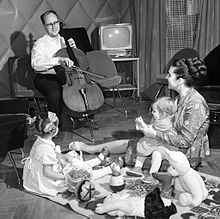 Slava and his wife are among the most delightful people I have ever met. They will be ever grateful to me for my small part in their escape to the West at a time when travel was extremely difficult for Soviet citizens - even world famous Soviet citizens! Rostropovich never forgot my part in his "American adventure."

BROWN: On February 13th, 1990 the National Symphony Orchestra came to Moscow, and returning as their conductor was Mstislav Rostropovich. It was the first time he had been back in the Soviet Union since he had been exiled. Years earlier, when he and his wife Galina Vishnevskaya were traveling abroad, his passport and his citizenship had been taken away, but during that period, he had done well. He was now the conductor of the National Symphony Orchestra. So his return was a highly symbolic event.

I went to the airport with the ambassador and the minister of culture for his arrival and he was greeted by a mass of journalists and well-wishers. I knew his sister and her husband quite well, so we were swept up in the arrival of the orchestra. There were press conferences and luncheons in his honor and two concerts.

At the first concert, he conducted the same program as the last time he had conducted on that stage before he went into exile - Tchaikovsky's Symphony No. 6 and Shostakovich. Shostakovich was one of his mentors, so there was symbolism all over the place.

The audience included, in a special box, Raisa Gorbachev [wife of Mikhail Gorbachev]. He did a number of encores. All of the encores were by Russian composers until the very last which he didn't introduce at all. He simply turned, picked up his baton and conducted the orchestra in "Stars and Stripes Forever." 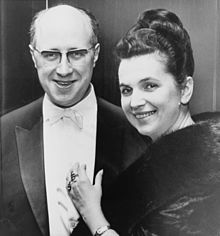 The message was clear. All the other music was Russian. That's where he came from. What he knew best was Russian music. But the final encore said something about where he was now. Politically he was now an American, Stars and Stripes Forever.

People stood and clapped rhythmically. It was a moving event. The next night, he not only conducted but he played the Dvorak Cello Concerto, one of the pieces he had recorded and one of the most famous pieces for cello. Then he went on to Leningrad and did another performance there.

If you didn't know it before, you knew by then -- that things were changing in the political world. And what better medium to express it than music?