While his colleagues attended a baseball game in Florida, West Virginia Rep. Ken Hechler drove to Selma, Alabama in 1965, defied Klan threats, and marched as the only member of Congress willing to join the "aroused conscience of the nation" in the historic civil rights event.

Celebrating his 99th birthday today, the legendary historian, legislator and former aide to President Roosevelt and President Truman remains at the forefront of civil rights and environmental justice, from Selma to Coal River Mountain, where he has dedicated a half century of his life to protecting citizens on the frontlines of reckless strip-mining operations.

If only the rest of Congress, the Democrats and all of us had your courage and determination today--to be hellraisers, pass the Appalachian Community Health Emergency Act and end the cancer of mountaintop removal that continues to spread to our communities in central Appalachia and reckless strip-mining in 20-odd other states.

In writing about his arrest in protest of a dangerous coal slurry impoundment in West Virginia a few years ago, almost 95-years-old, Hechler wrote: "I used to be an agitator, then an activist. Now I am a hellraiser."

As a witness to history in Selma, Hechler wrote that he felt compelled to join Martin Luther King, Jr. and other civil rights activists, in the days of the tragic bombings in Birmingham. 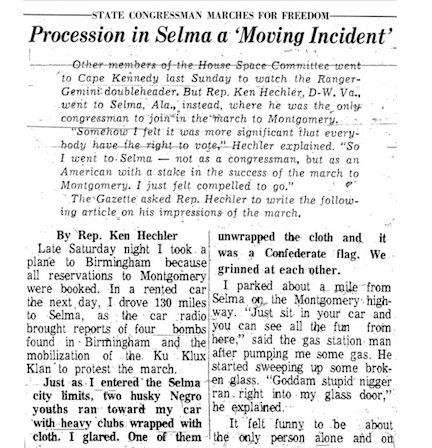 Hechler took that same sense of urgency to the coal mining regions of Appalachia--and the heartland and western states--where his congressional leadership led to the passing of The Federal Coal Mine Health and Safety Act of 1969, the first legislation to deal with black lung disease from coal dust.

Then, as now, the transplanted Hechler realized the families of coal miners were also casualties from reckless strip-mining operations.

As I wrote last year, eastern Kentucky author Harry Caudill pleaded with outside members of Congress to intervene on massive strip mining operations in his central Appalachian region a half century ago. "West Virginia, for example, has its own congressmen and its own senators who do nothing, say nothing, advocate nothing, see nothing wrong," Caudill told an told an interviewer. "It always takes someone like a man named Ken Hechler from New York or a man named John Kennedy from Massachusetts to notice that West Virginia is dying on the vine."

In 1971, Hechler organized the first Congressional hearings on mountaintop removal, and introduced the first federal bill to abolish strip-mining.

As Hechler testified in a House committee in 1971: "Representing the largest coal-producing state in the nation, I can testify that strip-mining has ripped the guts out of our mountains, polluted our streams with acid and silt, uprooted trees and forests, devastated the land, seriously destroyed wildlife habitat, left miles of ugly highwalls, ruined the water supply in many areas, and left a trail of utter despair for many honest and hard-working people."

In 1977, Hechler's long-time crusade against strip-mining was ultimately betrayed by various compromising forces in Congress, resulting in the passing of the Surface Mining Control and Reclamation Act, which provided federal sanctioning of mountaintop removal.

Four years ago, sitting among youth activists in West Virginia, Hechler told me he was waiting for President Obama to have his "Truman moment," citing the former President's integration of the military against his Democratic Party's wishes:

"It's a pipe dream that you can achieve progress only through consensus," Hechler told me, "especially when certain coal companies want to drive loopholes through otherwise principled legislation."

"You've got to be ready to make enemies in order to accomplish something."

Hechler is no stranger to courageous American presidents or the investigation of enemies. During World War II, serving as a major, Hechler took part in a five-man team that interrogated Nazi war criminals, including Hermann Goering and Joachim von Ribbentrop. As a history professor and author, he assisted Franklin D. Roosevelt with his 13-volume "Public Papers and Addresses of Franklin D. Roosevelt." But it was his tenure as a special research assistant for President Harry Truman that taught Hechler a lesson on a president's imperative to go against the Washington lobbies and conventional wisdom and make a historic stand. In Truman's case, risking the backlash of his own Democratic Party, and with a recent Gallup Poll that 82 percent of Americans were against his civil rights program, the president issued two "blockbuster executive orders" on July 26, 1948: Truman integrated the US military.

In a beautiful tribute for Earth Justice, Hechler noted: ""There is a light at the end of the tunnel, but the tougher it gets, the more exciting it gets when you can see victory. I'm still hoping that before I leave this world I get to see that victory, which I'm sure is going to come." 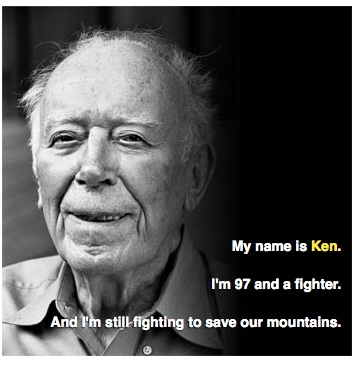 That victory's coming, Ken. Your inspiring work marches on.