There are few reasons considered acceptable in Los Angeles to cut short a meeting at Soho House.

The doctor's office calling with a diet pill prescription is a good one. It might be better than an agent calling with an audition.

I know, I know. No talking on cell phones at Soho House; those are the rules. Please. You're not allowed to take photos either, but they litter Twitter.

I asked my power lunch date, a Hollywood insider and a celebrity gossip, to move things along because homeless children were waiting. My dear friends would have pushed Beyoncé out of the way to get me to the kids on time.

Despite LA's standing as the most superficial place on earth, there are a few people with generous hearts.

It's not the side of Hollywood that Hollywood likes to promote because at the end of the day there's no deal, no show, and no points on the back end.

So charity work, the real stuff, not the celebrity photo op, gets done on the down-low. That brings me back to Soho House, that bastion of LA cool and Hollywood powerful.

"What's the fastest way to get to skid row," I ask hurrying down the ridiculously wide marble and glass staircase.

My friends laugh. They say that was probably the first time anyone asked that question at Soho House.

My guess is there were plenty within earshot, who knew exactly how to get to junkieville, and get there fast. A few of them probably came close to blurting out the answer until they realized it would have outed them.

After consulting several traffic apps -- don't laugh, we really do live trapped in an episode of SNL's "The Californians" -- I find the route with the least traffic and take off.

LA's skid row is such a sad place that I try not to drive through it. I always drive around it. It's not that I'm scared. I'm a journalist, which means I have an unfounded sense of bravado and confidence.

I don't like driving through it because it upsets me. On skid row, despair is amplified like no place I've ever been. No locked car door can keep that at bay.

But today, I cut through despair with a sharp knife of hope called School On Wheels, a mobile tutoring center for homeless children.

Every time I walk in the door of this free afterschool program, I get happy. It's a bright, joyful classroom filled with children laughing. Do you have any idea how rich a child's laugh can sound when it comes from a child with no place to call home?

Despite my desire to sit with the kids and eat cookies, a group of tutors pushes me back in the car because a TV crew is waiting for us at the Union Rescue Mission. The crew has taken the day off from working on a reality show to help School On Wheels shoot a PSA. What did I tell you about heart? 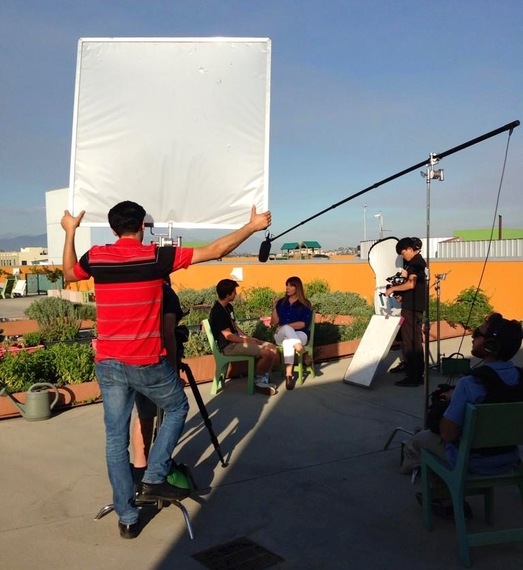 My contribution to this project is my interviewing skills. For the next few hours, I hear stories that break my heart and give me hope.

Ankara, a beautiful young woman in her twenties, can't stop crying long enough to tell me her story. The return to skid row has triggered her PTSD. Sitting next to Ankara is Patti, her former tutor. Patti's gone from tutoring Ankara to mothering her. Patti is now Ankara's adoptive mother. Patti, holds Ankara's hand, wipes away her daughter's tears, and tells the story for her. 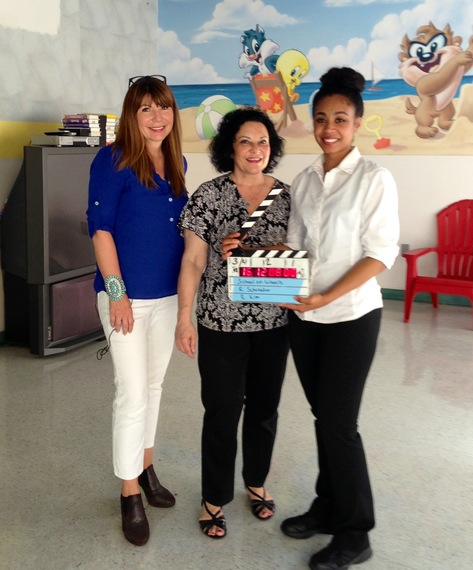 Then there's 11-year-old Taree. His eyes are bright, and his smile is huge as he twirls a pencil in his hand and works on homework with his tutor. 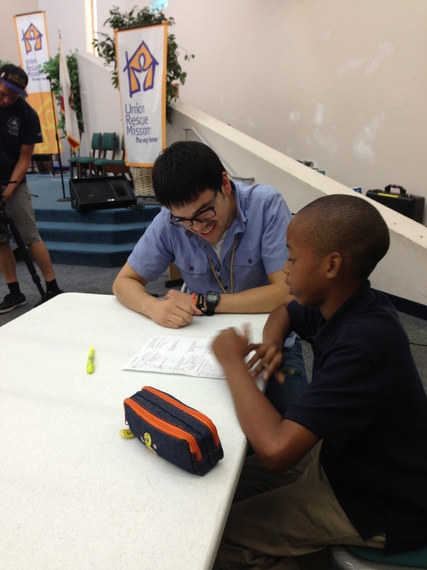 Taree tells me how he used to live at the Rescue Mission, and now lives in temporary housing with his family. Taree speaks of his situation with ease. He says his mom is working on getting them a home. The how, when and where of that process, is not his worry. Taree seems to feel safe just knowing mom is working on it.

Mom is not working on it alone. There are a lot of people helping, we just don't see them or hear about them. Angels aren't often boastful.

The real stars of this city are not found at Soho House or on the red carpet. They are found peeking under tarps looking for children who need help with homework like Ankara and Taree.

We wrap the shoot just as the sun is setting on downtown. As I drive home, I go straight through skid row, not around it, because on the trip home I don't see despair. I see hope.