When Scout Willis's nipple tweet hit the media fan, I was in an editing bay with my campaign team cutting our next viral video designed to help reform the handful of states left in America where women can still be fined, cited, and/or arrested for breastfeeding in public. Within a matter of seconds #Freethenipple alerts from TMZ, Huffington Post, Perez Hilton etcetera, started blowing up every production phone and laptop in the room.

In response to her account being deleted from Instagram, Scout decided to pick a very public fight with the social media bully, firing back a few shots over their little "nipple hating" corporate heads from her more "humane/woman friendly" Twitter account: 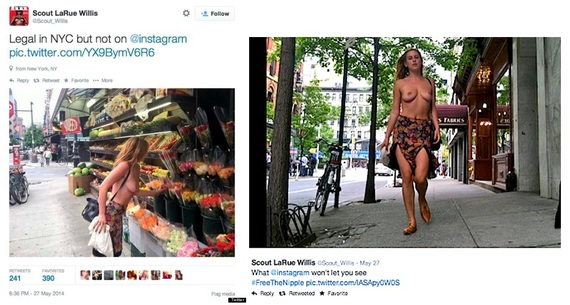 After being kicked off of every major social network this year (except Twitter) I can identify with Scout's frustration. Facebook, Instagram, YouTube and the new mafia of social media platforms deleted/censored all my accounts for posting a teaser of my film, Free The Nipple featuring the most dangerous part of a woman's breast -- the areola. Free The Nipple is based on the real stories of all the heroic women on the front lines of this puritanical-cultural-warzone, starving in jails to end these obsolete American laws.

Check out the banned Free The Nipple TEASER (NSFW) here.

Weeks before Scout's tweet, I was on set with her sister Rumer producing our next campaign video "Everybody's Gotta Eat." The PSA, directed by French filmmaker Sophie Tabet, is aimed at bringing awareness and an eventual end to the widely outdated criminalization of breastfeeding. With only 45 states mildly protecting a woman's basic human right to feed their babies, moms are hiding out in bathroom stalls like fugitives. 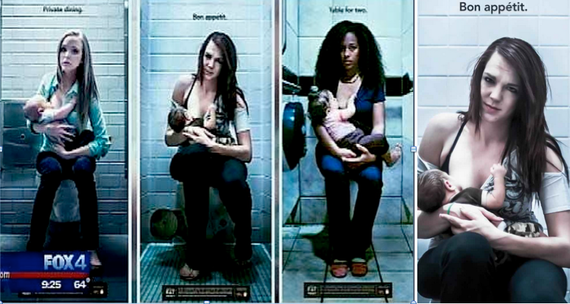 From the "When Nurture Calls" Breastfeeding campaign (whennurturecalls.org)

At the end of the day, Free The Nipple has only one clear-cut mission: to bring "America The Beautiful" the "Land Of The Free" into the 21st century. To accomplish this, the US Government needs to wake up from their 1950's-nuclear-family pipe dream and demand all women in America be recognized as "equal citizens" under the protection of the federal government and be granted the same rights that every man enjoys in this country.

Don't laugh, not too long ago it was 100% ILLEGAL for men in the USA to expose their nipples in public, including hot boardwalks and beaches. After mass arrests and protests, New York finally woke up in 1936 and became the first state to abolish this absurd law. For the first time in history men were free to rip off their shirts and run down the streets and beaches, and "man nipples" were no longer viewed as obscene by the status quo.

Almost six decades later, in 1992, New York's supreme court finally decriminalized "female nipples," but it didn't matter because the NYPD still arrested women anyway resulting in some very public "wrongful arrest" suits. So in response we took a film crew, a brave cast, armies of topless women and invaded the cold October streets of New York to challenge the NYPD to a duel. From the first day of shooting until just last week, we have endured so much harassment and censorship from the streets of Manhattan to the gatekeepers of social media, that the phrase "America The Free" has lost meaning. The good news is my lawyers, who are architecting the fastest route to reform, found a federal law that could possibly aid in bringing down this whole absurd house of puritanical cards:

Federal Law Pub. L. No. 106-058 § 647: Notwithstanding any other provision of law, a woman may breastfeed her child at any location in a Federal building or on Federal property, if the woman and her child are otherwise authorized to be present at the location.

This could be an effective "gateway law" to end the reign of terror on female nipples with one piece of legislation. Many states have no specific legislation outlawing women's nipples like California for example, however in LA you will definitely be fined and/or arrested. Regardless what the state laws says, at the city and local level under loopholes of "Indecent Exposure" and "Public Lewdness" it is left up to the judgment of the officer. According to Gotopless.org there are 15 cities in the US where women can be topless theoretically so protesting from city-to-city and town-to-town is a daunting journey.

As one of my lawyers bluntly put it (who requested to remain anonymous), "until the Federal Government steps up to protect the women in this country you're mowing grass with a butter knife. There are state and local officials who still like to push women around. So unless Obama goes to bat or congress pipes in, it's a tough one. Take a page out Susan B. Anthony's book. She personally took on President Wilson outside the White House for Women's Suffrage and won, and that was in the early 1900's with no social media, when women really had no rights in America." Legally and politically it seems the path of least resistance is to introduce and amendment or legislation that is in the same vein as Federal Law No. 106-058, granting women the right to breastfeed their baby at work or in public, in all 50 states under the protection of the Federal Government.

Just to be absolutely clear, Free The Nipple and the "gender equality" movements we have aligned with around the world are nothing like you grandmother's feminism. This is not about burning bras, hating on men and vilifying penises. We love men. We love bras. We love America. We just don't love being handcuffed and treated like animals by police officers who are being paid with our tax dollars to deny us our liberty. Here is a brief and simple definition of "gender equality" that perfectly defines our mission:

Gender equality, refers to the view that men and women should receive equal treatment, and should not be discriminated against based on gender. This is the objective of the United Nations Universal Declaration of Human Rights, which seeks to create equality in law and in social situations, such as in democratic activities and securing equal pay for equal work - Wikipedia

The moment you unearth statistics and follow the money it's very clear women have not been even remotely close to equal with men from the day this country began. President Obama in his State of the Union Address said, "for every dollar a man makes in the US, a woman only makes 77 cents." Though 46% of the work force is made up of women, 59% of women are earning less then 8 dollars-an-hour. Women make up barely 18% of Congress, 20% of the US senate and whopping one-third of the Supreme Court. As far as "gender equality" in Hollywood, two women were in the top 100 grossing films in 2013.

At least on paper it appears American men are simply better, smarter, more qualified then American women, thus explaining why men are entitled to more rights, better jobs, better pay and the power to politically push women around on all kinds of levels. If you search on Google for "women should" a very telling & revealing list of suggestions comes back:

Back in 1863, one of the most radical women ever born on US soil Susan B. Anthony founded the Woman's National Loyal League. Their mission statement was simple: to abolish slavery and achieve citizenship for all women and black Americans and be granted the same rights to vote and run for office as the "white guys." Six years later the Wyoming Territory passed Woman's Suffrage in 1869, however it still took almost 60 years for congress to pass the 19th Amendment in 1920 prohibiting "any United States citizen from being denied the right to vote on the basis of sex." And by "sex" I'm assuming for all intensive purposes they were referring to "gender equality."

Why does it seem like so many generations of Americans throughout history always have to fight so hard for their basic human rights in a country that prides itself on freedom? And how can these social media platforms claim to be responsible when you can view beheadings on Facebook and yet they banned our profile picture of a topless stick figure.

Personally between these two images which do you personally find more "obscene" by your "community standards: our Free The Nipple logo or bloody severed woman's head?

This was Facebook's official response after the British Prime Minister sent out an angry tweet condemning FB for their decision to continue promoting this horrific content:

If you happen to share our simple belief that the United States is no longer living in the 1950's, that men and women should be treated equally under Federal Law by order of the President of the United States and the 113th US Congress then go to: Freethenipple.com and join the evolution right now.

"The issue is not trivial. The imposition on women is great, the inconvenience real, the stigma pernicious" - California Attorney Carol Agate