I spent a good part of this winter in Goma, Eastern DRC. I went to cover the conflict in the region and see for myself the programs that aid agency Oxfam had been scaling up since the region imploded in November of 2012. Literally tens of thousands of people had just fled their villages in the hope of finding some peace. Many of them walked for days and risked their lives to get to Goma in one piece.

I went to the Bulengo camp, home of some 50.000 displaced Congolese. I also spoke to men and women in the ever-growing Mugunga camp now home for some 60.000 people. Families of five were living in small 8ft x 5ft huts, built of straw, pieces of clothing and volcanic rock. People had little food to eat and were relying on humanitarian assistance for their survival.

I've been working with aid agency Oxfam for more than eight years, covering humanitarian crises from Niger and the Occupied Territories to Somaliland and Haiti. I thought I had "seen it all' -- until the Congo.

After my first visit to Bulengo, I got back to the guesthouse in utter shock, in tears and in disbelief of what I had just seen. I remained traumatized by what I had seen and it took me days to go back "to the field". 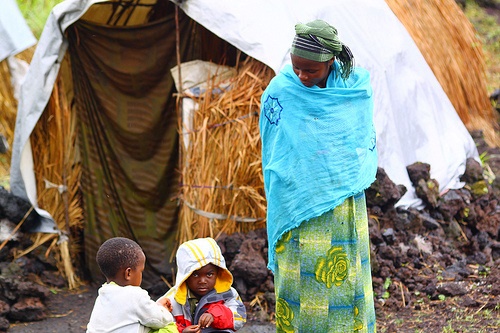 A family in front of their temporary shelter in Mugunga I camp near the city of Goma, eastern Democratic Republic of Congo. Photo: Eddy Mbuyi/Oxfam, January 2013

So what made them flee their homes? Guns.

Every person I talked to in Goma had fled their villages because of armed violence. They witnessed direct attacks on their communities, on their friends and their families. Militias in the DRC can easily buy AK-47s and ammunition which enter the country across different borders. It's not a secret. Everyone knows that the conflict in the DRC has been running for almost 20 years because of the ability of gun runners and arms dealers to get weapons into the DRC.

For years I have been working on the issue of arms control. When I got to Congo, I started to see that work in a whole new light and it suddenly all made sense.

The world has never properly regulated the arms trade, the most dangerous trade there is. We have the most complex and strict rules on all sorts of products, from MP3 players to my flatscreen TV, but no global rules for trading armored vehicles, unmanned attack drones, machine guns, attack helicopters or bullets.

One person per minute loses their life as a direct result of armed violence. Every day in the DRC, the irresponsible arms trade feeds a cycle of misery for hundreds of thousands of people that are longing for peace. Thousands are killed, many others are injured, women are raped and, as I witnessed, are forced to flee from their homes because of the constant threat of being attacked by armed men.

I am now back in New York and will be "living" at the United Nations for the next 10 days to lobby and push for a strong Arms Trade Treaty. The Treaty is the first attempt to regulate the deadliest trade of them all: the arms trade.

Somehow, I had never fully made the connection between some of the humanitarian crises I had covered for Oxfam and the negotiations in the corridors of the UN on a future treaty to harness the trade in weapons and ammunition.

It clicked in Congo. Now I know why we're here, why the Treaty is so badly needed in places like the DRC. 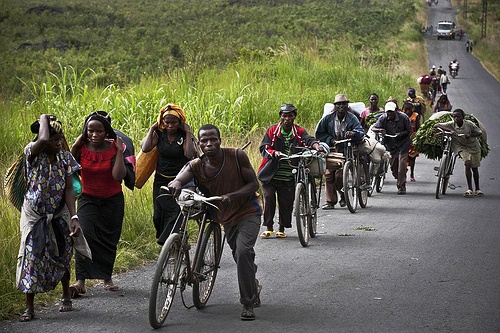 Families flee ongoing fighting between M23 rebels and Congolese Government in outside of Sake, near Goma. Photo: Kate Holt/Oxfam, November 2012

Lack of laws between states leads to weapons crossing border too easily, fueling what is already a very volatile part of the world.

Those weapons are used by human rights abusers and extremists to attack innocent people: Farmers, mothers, young girls dreaming of getting an education and young men working hard to provide for their families. These are the people I met; these are the people that had their lives turned upside down because of the unregulated arms trade. They live in the worst conditions I have ever seen people live under. Their stories broke my heart, but they also helped me see things a bit more clearly.

After years of campaigning to bring the arms trade under control, we sometimes forget who we are fighting for.

The negotiations get technical and it all gets a bit tedious. But we must never forget why we're doing this.