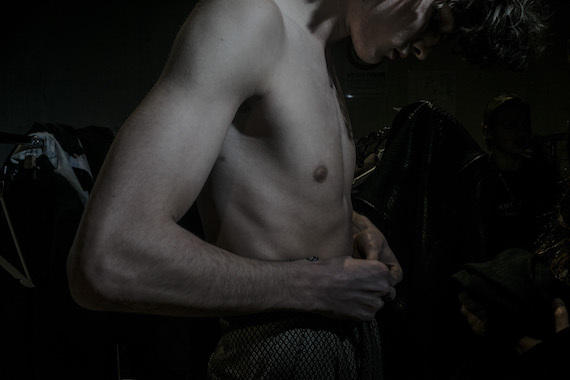 "I don't want to be defined by it, by that thing." Those wise words belong to photojournalist Guy Martin, when talking about the 2011 attack in Libya which injured him along with one other photographer, and left both Chris Hondros and documentarian Tim Hetherington dead. In a society that loves to place labels on people, for their achievements but most often for their misfortunes and mistakes, Martin is a perfect example of why such simplistic definitions are just plain wrong.

We are, and we become who we will be by constantly reshuffling and adding up all of our life experiences -- the good and the bad, the brave and the scary, the deaths and the births. British-born and Middle East expert documentarian Guy Martin represents a wonderful specimen of the possibilities of humanity's resilience, and grace under fire.

But, get this, I didn't meet Martin on the embattled streets of Aleppo, or under siege in Misrata, or even in Tahrir Square during the Arab Spring. I meet the young, handsome and wise beyond his years photographer instead with his assistant for the day Louis, at Pitti Uomo, a fashion fair -- during a break in the press office. Martin is in Florence to document Pitti Uomo through his lens, as part of a collaboration between Fondazione Pitti Immagine Discovery and nineteensixtyeight, a curated platform dedicated to the discussion and dissemination of modern photography.

Yes, granted, our initial meeting is inside the Fortezza da Basso, a fortified military building erected in the 1500s by the Medici family in the middle of Florence, to induce fear in their opponents who had ousted the family years before. But that is as far as the war references go. Or is it? 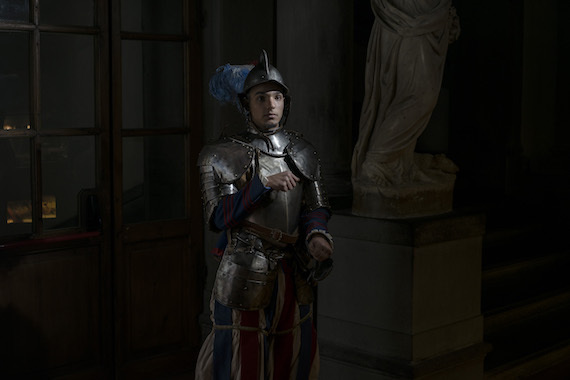 Does a fashion event echo some of the same stances and emotions as a war zone?

According to Martin, perhaps. He explains, "I think there are many kinds of similarities between doing something on the chaos of covering conflict to the chaos of two or three wardrobe changes backstage. At the end of the day, the things I look for are very human experiences so it doesn't matter if that experience is chaos backstage of a fashion show or the chaos of hanging with rebels and fighters who are getting ready to go out and fight a battle for the day. It's the same kind of mannerisms, it's the same body movements, so as an observer of the human experience, I'm looking for those gestures and that body language that translate from a fashion show, to the street to more social documentary work, which is where I come from."

Explaining further why he doesn't like to be placed into the convenient little box labelled "war photographer" Martin admits, "I've never actually called myself a "war photographer" because I think that narrows my skill and I don't want to be defined by that. When I am grey and old and I look back and it was only pictures of war and conflict, I think that would just be a really dangerous place to be. I love life in all of its things. There are plenty of old, injured war photographers who still go on talking about the old war stories and kind of live off that and that isn't me. I just couldn't do that."

I tread lightly when it comes to speaking about Hetherington, because I know from personal experience that PTSD is the one aspect of an accident that never really goes away, and the slightest hint, the smallest mention can bring out a flood of emotions. Of course, I want to get to know Martin, discover more about his wonderful talent, his strength and what makes him tick, but it is never interesting to me to break the magic divide that naturally exists between the writer and the subject of an interview. So, I mention seeing a few articles about the accident online and I express how much joy is present in Martin in person, so much more than I ever expected from a survivor of war, essentially. That brings about memories of his colleague, "Tim" a man who in his short life made award winning, Oscar-nominated documentary films like Restrepo, created installations, contributed to best-selling magazines and curated books which made photojournalism "cool." 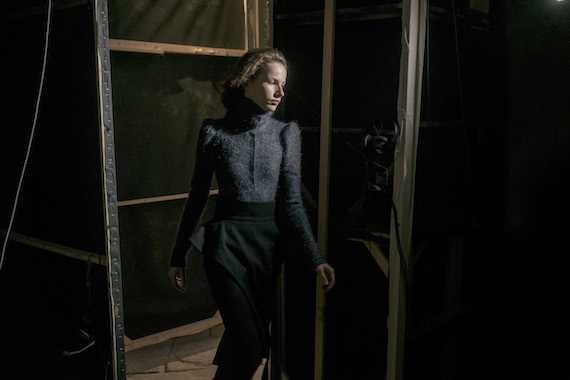 "I knew Tim before what happened in Libya and there is one thing that people say that I think is so true with photography, and it's "you should never meet your heroes." I grew up fascinated by war photography and documentary photography and as I got older and into these situations, I met some of the people who inspired me in their work. And their work is still inspiring but as a person, I was like 'I don't want to be you'." Martin continues, "but Tim was different. And the way that Tim, particularly in his work in Afghanistan with sleeping soldiers and what he'd began to do with his work in Libya, was this idea now that the battlefield is a performance, there was a performance aspect in it."

In the car on our way to a fashion show inside the Sala Bianca, an iconic room inside the Palazzo Pitti where the "Made in Italy" concept began 55 years ago, Martin opens up further about this notion of war as a performance of sorts, which Hetherington had began to play with and which he himself is finding through his work. "Be it men trying to search for their role as men in war, who'd never picked up a gun and watched Rambo films to learn how to fire. Tim began to pick up on that, and I wasn't maybe mature enough to pick up on that, but I saw what he saw and he just began to do it. And I'm so sad that he never got to carry on that. So in a way I kind of think I owe a lot to that experience, and to Tim and to trying to relay that performance, that study of young men, that study of humanity through many different stories." 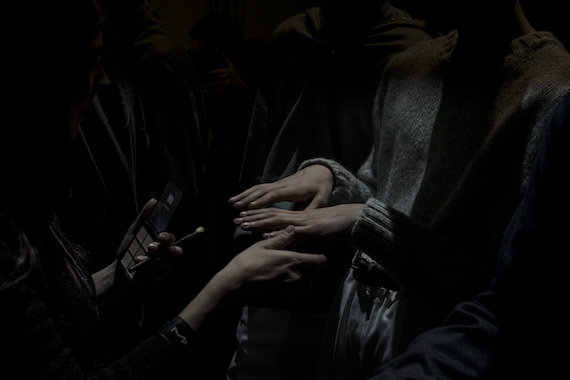 In Martin's own work, a nearly indescribable quality is present, this wonderful kind of intimacy beyond all possible odds, and his work at Pitti Uomo is no exception. Male models captured bare chested backstage, a female model rushing back from the runway to change, even a young halberdier inside Palazzo Pitti at the Stefano Ricci show we watched together, the affinity Martin feels with the vulnerability of his subjects makes the person beholding his photographs feel like they are magically intruding on a private moment. During another car ride we share together, later in the day, he talks about how odd it is for him to be allowed so much access, particularly to women, backstage and up-close. "In the Middle East it's a luxury to be able to capture a woman's image," Martin explains that he has to spend time convincing those around them that he's worthy of that, and in Florence instead he's been granted immediate access, no questions asked, to models who don't even seem affected by his presence.

Inspired by Martin's passion, I'll admit that I started looking at the presentations as battles of sorts, the photographers' pit became the trenches of these fashion wars, and the models started to appear more helpless, walking among the surly fashionistas hoping to gain approval. Everything took on a much more important tone with Martin around. It could be that he had earlier referred to the birth of his daughter as "a miracle" following his injuries. Or just the aura of being around someone who looks for the humanity in every situation. 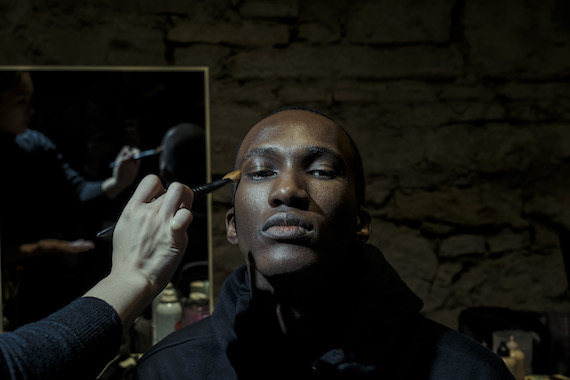 I ask Martin what his Zen is, what gives him balance and he replies, "cooking and being in the water. I grew up on the beach surfing, before I was a photographer I was a surfer and represented Great Britain in the World Surfing Games when I was 16. I find such solace and relaxation in the surf, and bigger surf in particular. It's an adrenalin thing." When we touch briefly on life lessons, he says that from his experience he's learned "not to say no to things," and jokes that if he wasn't at Pitti Uomo on this unusual assignment for him, "'I'd probably be home doing my tax returns and would not have this week."

The wildcard question, what I usually end an interview with is how a person would describe themselves, in three words, to someone who doesn't know him. Martin chooses calmly, "I would say adventurous, human and honest."