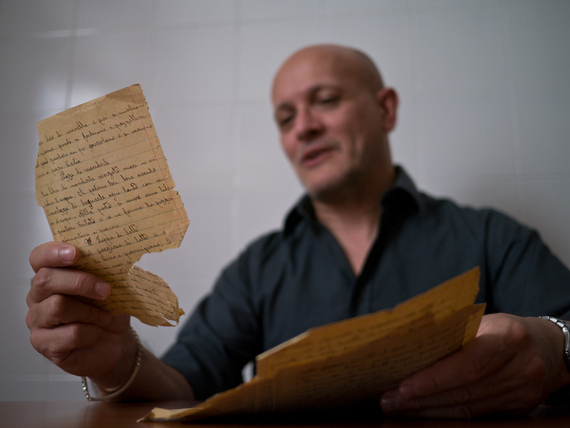 Photo: Duccio Battistrada
A bundle of yellowish brittle pages, written in a time-worn, careful handwriting, have been floating around my mother's kitchen for years. I was aware that she still consulted them, as she does with more recent printouts from the Internet and old magazine clips. At times, I even helped her make some of those dishes for special occasions and major holidays, honing both my muscle memory and my senses. Yet, until recently I had never paid much attention to those fragile sheets of papers and their content, which date back to my great-grandmother's times.
While writing my last book, Al Dente: A History of Food In Italy, I had the opportunity to dig deeper into the past of the culinary landscape I grew up in and that I took for granted. Both my previous experience as a food writer and my research in food studies now motivates me to look at food as an entry point not only into pantries and kitchens, but also into the material culture of a community, as well as its social and economic dynamics.
Reading the old recipes in my mother's kitchen, I developed the desire to become better acquainted with the generations of women who shaped my taste of home. So I have been going back to those pages, which have survived a world war and the migration to the big city with the same hard-headed tenacity that many attribute to the people from the Abruzzo highlands, where my mother's side of the family is originally from.
It is hard to tell who wrote which recipes. Besides my great-grandmother, other authors appear, suggesting how knowledge was shared and traded among women. Each of them may have had her own specialty, for which she received praised and respect, but nevertheless frequent exchanges apparently allowed them to create a common language. The oldest recipes date to the 1920s, when the National Fascist Party began to gain prominence. Written in notebooks that had decrees from the King of Italy and Aesop's fables on the covers, they point to a world more layered and intricate than one could imagine for a 500-soul village carved into the Apennine Mountains.
The careful penmanship was an achievement for women who only had access to few years of elementary-level education, if that. The use of the Italian language, difficult to master, rather than the local dialect they grew up speaking, showed that those recipes - many were for desserts - were special and not meant to appear on the everyday table. Some texts, where words from different dialects slip in, reveal influences from various regional cuisines, showing that these women had access to sources outside their immediate environment. Other recipes echo the then nascent "Italian" cuisine, a by-product of the recent unification of the country in 1861 that found its first full expression in Pellegrino Artusi's Science in the Kitchen and the Art of Eating Well.
The handwritten recipes were set aside and saved together with clips from newspaper culinary columns, a testimony to the curiosity of these women who probably had limited access to travel. On the back of the clippings, ads for slimming products and breast enhancement point to a very intricate feminine world. In the same heap, I also found my mother's university notebooks, which on one side carried notes about Italian literature and, on the other side, recipes that she was trying to collect, in preparation for her duties as a soon-to-be bride, as Italy in the early 1960s was still a relatively traditional and conservative place.
I am figuring out what to do with these recipes, besides keeping on making the ones that are part of my family's culinary legacy. I strongly believe that cooking, as many other manual activities, is a legitimate form of knowledge that has been kept to the margins of culture that favored intellectual and theoretical endeavors, leaving practice and manual skills to the messy and ordinary world of labor. I want to understand the world that inspired these documents, from the material and cultural points of view. To start, I plan to recreate those recipes with another food writer, Saverio De Luca, who owns an original wood stove from the 1940s, similar to those that the authors of the recipes used. We started with a couple of recipes, working under my mother's guidance, the living memory of techniques and skills that are learning anew. I will soon share the recipes and what we learned while cooking...