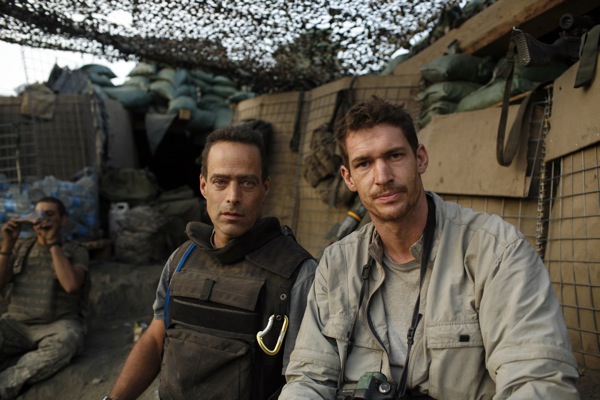 When journalist-filmmakers Sebastian Junger and Tim Hetherington began shooting the documentary that became Restrepo, any ideas of one day attending the Academy Awards with the film as a nominee in the Best Feature Documentary category, as they will on this coming February 27th, were likely quickly replaced by thoughts of survival.

During ten different trips between May 2007 and June 2008, Junger and Hetherington embedded with the Second Platoon of Battle Company of the U.S. 173rd Airborne Brigade, in the mountainous Korengal Valley of Afghanistan, a region frequently used by the Taliban to stage operations and considered one of the most dangerous areas in the country. Junger and Hetherington were on assignment from Vanity Fair, but also decided to add to their duties the shooting of a documentary about the deployment of Second Platoon.

Over the course of these lengthy embed periods, Junger and Hetherington became an accepted presence amongst the soldiers, and this trust allowed the documentarians to capture the experience of a military deployment in an intimate, fly-on-the-wall manner generally only encountered in fiction films. The cameras of Junger and Hetherington take the viewer inside both harrowing firefights, and the downtime in which the men bond, much like great war films such as Platoon, with the difference being that Restrepo is real.

By design, Restrepo doesn't include any discussions of the politics of the war, focusing instead exclusively on the experiences of the soldiers. Says Junger, "We had a very specific mandate that we'd given ourselves, to bring the experience of being a soldier to viewers. And soldiers aren't political. We really didn't want anything in the movie that wasn't part of their reality. We never tried to get an interview with the general at the main base, about the strategy, because the soldiers don't have the opportunity to ask those questions either. So that was our sort of central ethos with the movie, to create their reality onscreen."

The soldiers of Second Platoon were amongst the first people that Junger and Hetherington spoke to upon receiving the news of their Oscar nomination, and the filmmakers hope that some of the soldiers might be able to accompany them to the awards ceremony. The film is named after Army Private First Class Juan S. Restrepo, who was killed in battle during the deployment at the age of 20, and Hetherington recalls his conversation about the nomination with the mother of Juan Restrepo, "I spoke to Juan's mother the day we got the news. She's been very moved by the whole thing. This will never bring back her son, but we hope it's a nice tribute to him and his fellow men."

Restrepo began its screening life over a year ago, when it debuted at the 2010 Sundance Film Festival, and won the Grand Jury Prize in the documentary category. It was theatrically released in June by National Geo Movies; however, public interest in the film seems to actually be increasing in the half-year since its initial release. As examples, Restrepo has been a heavily promoted selection at the popular Redbox DVD rental kiosks for the past few months, an unusual occurrence for any documentary, and attendance has continued to be high at recent special screenings of the film with Junger and Hetherington as guests.

Junger elaborates on the topic of the growing awareness of the film:

"Usually, conventionally, with these projects, they sort of peak a few weeks, or a month, after the release, with the most publicity and all that. What's interesting about this project is that it really does just seem to be slowly building and it's really kind of becoming part of the conversation, within the military, about the war they're in. It's also part of the civilian discussion. In a really interesting way, it's sort of becoming part of the national dialogue. I don't have numbers to prove that, but when we're out on the road giving talks... the sense that we both have is that it's really making its way, into the way people are thinking about this war."

In April, Junger and Hetherington plan a return to Afghanistan, on a new assignment for Vanity Fair. As to exactly what their journalistic focus will be this time around, Hetherington explains, "We're trying to work that out at the moment. We're not going to do a micro-view, as we did with Restrepo. I think we're going to be doing much more of an overview. We're at a very important juncture in the war. People are sort of looking for a barometer of what the state of play is, and what the possibilities are of the road that lies ahead."

Junger adds, "It's a really interesting moment. The military offensive in the south in Kandahar, just on a tactical military level, actually was pretty successful. And then there are these other changes... over 3/4s of civilian casualties [in Afghanistan] are now caused by Taliban attack. So there are now Afghan human rights groups calling for investigation and indictment of the Taliban for war crimes. I don't know if things are changing for the better, but they're definitely changing. We want to be on top of that."