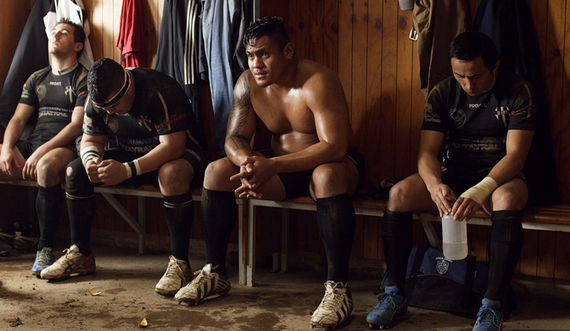 The story depicts a young Wallisian man trying to make it in the world of rugby in France. 3 B Productions

After it premiered at the Cannes Film Festival Director's Fortnight, the movie was hailed as a fine-grained drama with overtones of Greek tragedy, whose subtlety contrasts with the imposing physicality of the characters and their propensity for raw violence, rage and deceit.

Reviews have largely focused on psychological aspects of the story, but the film is also one of the first depictions of the complex world of migration in global sports.

Soane Tokelau (played by Toki Pilioko in his first role) and his family hail from Wallis, an island known to its 8,500 Polynesian inhabitants as 'Uvea, which has close social, cultural, historical and linguistic affinities to neighbouring Tonga, Samoa and Fiji.

Unlike its independent and much larger neighbours, Wallis forms a French overseas "collectivity" together with the smaller neighbouring island of Futuna. Its inhabitants are French citizens, heavily dependent for daily subsistence on economic aid from France, from which they have little desire to separate.

Like many other Wallisians, Soane's family does not live on Wallis, but in much larger and nickel-rich New Caledonia, where 21,000 Wallisians and Futunans are now settled. Wallisians in New Caledonia work primarily in the nickel mines and the police force, sending remittances back to their relatives on Wallis.

They help tip the balance in favour of the continued French colonial presence in New Caledonia, against the desires of most indigenous Kanaks.

For many Wallisians, life in New Caledonia is no bed of roses. The film depicts the Tokelau family - the hyper-authoritarian father Leone (Petelo Sealeu), Soane's little brother (Maoni Talalua), a bedridden grandmother and their three-legged dog - all living in a corrugated-iron hut by the beach. The hut is evidently located in the squatter settlement of Nouville, outside New Caledonia's capital Nouméa.

One day, while playing rugby with his friends, Soane is spotted by a recruiter, Abraham (Laurent Pakihivatau), who makes an offer to Soane's father to ship his son to a top-level rugby club in France. The gun-toting father demonstrates his opposition to the plan in no uncertain terms.

He eventually lets Soane go, but not without disavowing him.

Soane arrives in France with only the tank-top and shorts he is wearing and the book of Christian scripture his grandmother has entrusted to him. He is met at the airport by the manager of the promised team who, armed with a scale, announces the deception: Abraham had promised a 140kg prop, and Soane is only 120kg, and the manager wants nothing to do with him.

While the film gives a dramatic tone to the scene, it does resemble situations that are not uncommon in the sport industries.

Left on his own, Soane looks up a relative (Mikaele Tuugahala) whose address he had been given in New Caledonia. The relative reluctantly arranges for him to join a fifth-division team in the small, impoverished post-industrial town of Fumel, in southwestern France.

There, Soane confronts the prejudices of his teammates, who peg him as an exotic and savage Polynesian. But when he pairs up with supermarket cashier Coralie (Iliana Zabeth), who describes herself as "the girl whom everyone has fucked," racism turns to violence.

The themes of the film - dreams of extracting one's family out of poverty through sports contracts, deceit by unscrupulous agents, and being lost on the other side of the world - are precisely those that I have been researching for the past ten years.

Tongans were the first people in the Pacific to understand, back in the 1980s, that the sport their young men loved to play could be turned into waged labour. Today, in all the countries of the world where rugby is well funded, most clubs include at least one Pacific Islander.

For clubs involved in the cut-throat competition for economic survival that began when sport became a televised industry in the 1990s, Pacific Island players represent a source of relatively cheap and highly talented labour endowed with formidable physical constitutions.

Migration for a sports career has become a visible counterpoint to these other labour migrations. The returns it promises are far greater than the income that other migrants can hope to generate.

But the reality that most prospective athletes encounter is strewn with difficulties. The brevity of youthful masculine vigour, the spectre of injury, the capricious nature of corporate interests, the precariousness of adoptive forms of belonging and the unforgiving responses of the public all bestow a profoundly fragile quality to sport careers.

For migrant athletes, this fragility is compounded by the false promises of unscrupulous recruiters, the cold reception of club officials, and the unreconstructed racism of teammates, sponsors and the public, just as in Mercenaire.

This article is part of a collaboration with Niko Besnier's GLOBALSPORT research project funded by the European Research Council.